With some lag, time to update Irish Retail Sales stats to September data. Instead of going over the usual details of the dynamics, let's take a broader look at what is happening in the sector:

Starting with a chart: 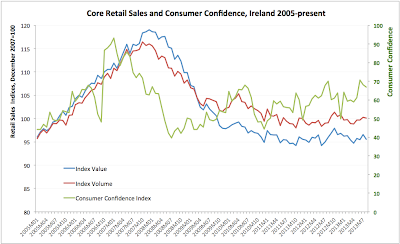 As above clearly shows, both the Value and the Volume of core retail sales are going nowhere - the series are bouncing along the bottom, switching direction almost on month basis. This suggests that


Of course, you would also notice in the above chart the absolutely bonkers behaviour of Consumer Confidence indicator. And you are right: as chart below clearly highlights, the Consumer Confidence has completely detached itself from Retail Sector realities: 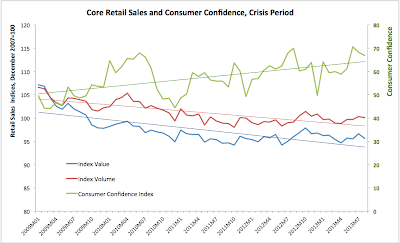 Timing the start of the crisis to late the start of 2009 (if we take the start at mid-2008 things are even uglier for the Consumer Confidence), we have:


This implies that Consumers are claiming that which they do not practice. Why? I have no idea. Patriotic duty to be optimistic? By Consumer Confidence recent readings, we should observe retail sales activity around late 2006-2007 levels. Ooops... Value of Retail Sales is now below where they were back at the start of the series in 2005. Volume of Retail Sales is now around late 2005. 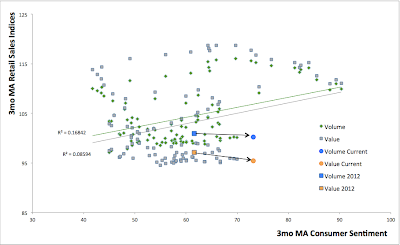 There are no statistically or economically meaningful links between 3mo MA for Consumer Confidence and either Value or Volume of Retail Sales. Worse, year on year, the disconnect between the series has grown wider for both, with the widening being steeper for Value index. Again, this potentially indicates that margins in the retail sales have been wiped out and that this is not enough to get consumers spending again.

Which raises one serious question: local authorities are planning to jack up their rates in 2014. How will retail businesses afford these when they are trading in the above conditions?

As you know, I run my own index of Retail Sector Activity - RSAI - and updating this to September shows the flatlining of the trend for Retail Sector activity overall. All in, we are now in 75 months-long period of declining or flat retail sales: 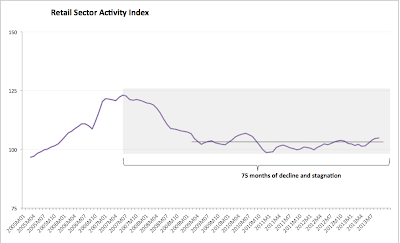 You can turn the numbers upside down and compute them sideways. You can listen to the Government spokespersons telling us about improving consumer confidence until the Halloween pyres consume the last tractor tyre. You can believe that we are in a turnaround.

And I wish I could do so alongside you... but the above figures are not showing this. Perhaps we can add 'not yet' to that statement to keep some hope alive.
Posted by TrueEconomics at 11:19 PM