This is an unedited version of my Sunday Times column from October 13, 2013.


Recent events have led to a significant reframing of the Budget 2014. With these, the Government is now actively signaling a more accommodative stance on next year's cuts. Alas, the good news end there and the bad news begin. Any easing on austerity in 2014 will be unlikely to produce a material improvement in household budgets. In return, the Government will be placing huge hopes on robust growth returning in 2014. If this fails to materialise, lower austerity today will spell more pain in 2015. Like a dysfunctional alcoholic, unable to stop binging at closing time, we ignore tomorrow’s hangover.


A combination of the latest IMF report on the Irish economy and the outcome of the Seanad abolition referendum have settled the debate on the scale of adjustment to be taken on October 15th. Embarrassing defeat in the referendum has meant that the continuation of Taoiseach's leadership required some symbolic gesture toward the electorate. Lowering the 2014 cuts targets on October 15th can serve the purpose for a few crucial months until the New Year.

Meanwhile, ambiguity-embracing IMF lent a helping had. The IMF repeated its insistence on EUR5.1 billion combined 2014-2015 cuts in the latest assessment of the Irish economy. Yet, the IMF avoided specifying the breakdown of these adjustments between 2014 and 2015. This has given the Government confidence to argue the case in favour of partially delaying 2014 adjustment in front of the EU overseers of our budgets.

Immediately after the IMF report publication, Irish media was promptly fed the rumors that the Minister for Finance was seeking a reduction in the level of budgetary cuts. This week Minister Noonan said that the 2014 adjustment will be EUR600 million lower than EUR3.1 billion originally agreed with the Troika. The savings will amount to 0.37 percent of our GDP: a small boost for the Irish economy, but a massive splash in the PR spin terms for the Government.

With some cuts delayed to 2015, Ireland’s debt sustainability and deficit targets now hinge on the Government’s forecasts for growth materializing over the next twelve months. The risks to these are non-negligible. Last week IMF lowered Irish GDP growth forecasts for every year from 2013 through 2018. Compared to the forecasts released in June this year, October forecasts for inflation are also down. This implies that nominal growth – the source of budget deficits and debt dynamics – is expected to be even slower. If back in June this year IMF expected Irish economy to be at EUR205.8 billion by 2018, now the fund is projecting it to hit EUR201.7 billion. Cumulated forecast nominal GDP for 2013-2018 is EUR15.6 billion lower in October report than in June assessment.  Even before Minister Noonan’s latest reductions in fiscal adjustment for Budget 2014, IMF projected worsening of Irish deficits in 2014-2018.

Department of Finance forecasts, released this week and underpinning the Budget 2014 calculations are more optimistic on nominal growth, expecting higher inflation and anticipating more domestic consumption and investment than the IMF. If the Department gets its forecasts wrong, we will pay 2015 for the delays in cuts planned for the next year.

Flying on hopium of rosy growth expectations is a risky proposition for the Exchequer especially ahead of our drawing down the final tranche of the Troika funding. For this risk, the savings to be delivered in the Budget 2014 are likely to be insignificant from economy’s point of view.

Given the precarious position of the Government in public opinion polls, it is a safe bet to assume that the coalition will be putting the money to ‘work’ as an investment stimulus and a cushion against cuts to social welfare and health.

New building programmes in the more sensitive constituencies hold some serious political capital. But planning allocation of large sums to new investment is a lengthy process before construction jobs actually materialise. Growth impact of these measures in 2014 is unlikely to be significant.

But the thrust of 'savings' is likely to go to the second option. Doing as little as possible for yet another year in structurally altering the way we spend on social supports and healthcare will mean that the budgetary changes to health spending in 2014 will likely be identical to those undertaken in the past. Expect more cost shifting to private insurance, more sabre-rattling over cost overruns and more imaginary gains in productivity. Social welfare ‘cost containment’ measures will continue to rely on 'demand attrition' - the declines in demand due to unemployment benefits expiration and emigration. This means zero impact on growth in 2014.

Meanwhile, revenue side of the budgetary equation will keep pressuring the economy.

Fine Gael's side of the Coalition is promising us that the Budget will contain no new taxes. Alas, in Ireland we have a very narrow definition of both terms: 'new' and 'taxes'. In 2014 we will be facing a full annual Property Tax bill, which is expected to take out additional EUR250 from the average household income. The Budget will also likely raise charges on families to fund education and healthcare. The Irish Government is saying these are not new taxes. Anyone expected to pay them would disagree.

Last year, PRSI changes and reduction in child benefits were not identified as 'new taxes' either. These cost an average working family with two children some EUR494 per annum – an involuntary reduction in family income.

Per research note published by Grant Thornton two weeks ago, a family on EUR80,000 with two earners with two children saw their tax bill rise by 54 per cent since 2008. Their disposable income is now down a massive EUR6,132 per annum. Only a small fraction of these were officially recognised as new tax measures.

Meanwhile, the same families have also seen the costs of basic services provided by the state agencies and enterprises, or controlled by the state regulators and heavily taxed, rise dramatically over the course of the crisis. On average Irish consumer prices fell 1.6 percent between August 2008 and August 2013. Health insurance costs more than doubled over the same period, education costs inflated by 29 percent, bus fares have gone up over 46 percent, and motor tax went up 27 percent. Increases in core public services costs have taken out close to EUR3,500 annually out of the pockets of an average Irish family. These came on top of the Grant Thornton tax cost estimates cited above.

What is the opportunity cost for the families of the losses brought about by the fiscal crisis? For an average family with expected working life of 25 years, the above costs of austerity are equivalent to around EUR111,000 in foregone pensions savings. This excludes costs of the same measures continuing beyond December 31, 2013 and the new measures yet to come in 2014-2015.

The devastation of the above financial arithmetic is even more apparent when we realise that we are far from completing the full set of fiscal adjustments needed to restore our public finances to health. Medium-term Government fiscal consolidation forecasts confirmed by the IMF last week, envision total fiscal consolidation for 2014-2015 to be EUR5.1 billion. Of this, new revenue measures for 2014-2015 are to be set at EUR1.5 billion against carry forward measures of EUR0.3 billion. Current spending cuts are set at EUR3.2 billion. These adjustments translate into additional fiscal burden of EUR3,300-3,500 per annum for an ordinary family.

The hope is that the general economic recovery will mop up the household finances blood spilled by the fiscal crisis.  This rosy expectation is in turn driven by Minister Noonan’s worldview in which Irish trade partners are expected to also grow faster in years ahead. Alas, this Tuesday, IMF cut its global growth forecasts for both 2013 and 2014.


Forecasts aside, today, Ireland has run out of the road on tax hikes and revenue raising measures.

Instead of hiking tax rates, the Government is expected to widen the tax base in Budget 2014. The most efficient way for doing so would be to close loopholes on income exemptions. Less efficient, will be to lower income threshold at which upper marginal tax rate kicks in. Middle and upper-middle class families will pay in either scenario, but the costs to them will be higher in the latter.

In addition, the Government has been briefed on the potential for hiking PRSI for self-employed, while opening up access for this category of workers to social security net. Conditions for accessing cover will be so onerous, few self-employed will ever be able to qualify, but the hike will be politically acceptable. Currently, a self-employed person earning the equivalent of minimum wage pays almost six times as much tax and PRSI as an employee. Few interest groups so far have taken up a challenge of pointing this fact out.

Reality is, Ministers Noonan and Howlin have hit the brick wall. All the low-hanging fruit of marginal tax hikes and revenues extraction schemes has been picked. What's left now are two possible options. Option one: cut social welfare and health. Option two: delay adjustments and hope that comes Budget 2015 day, growth will pick up, unemployment assistance costs will fall, and Brussels will be happy enough reveling in the euro recovery to let things slip a bit on targets in Dublin. No prizes for guessing which option the Coalition will pursue comes next Tuesday. 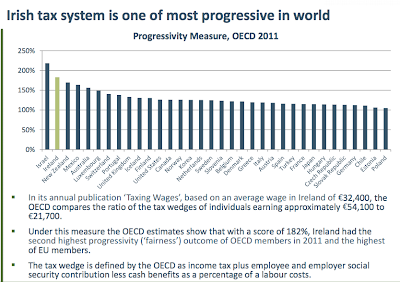 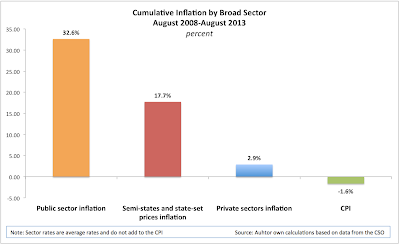 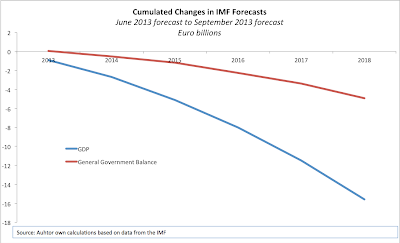 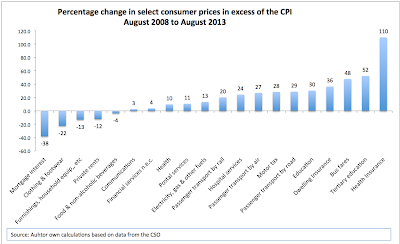 This week, the IMF published an assessment of the impact of the monetary policies deployed since 2008 by the ECB, the US Fed and the Bank of England. These unorthodox measures ranged from outright quantitative easing to lowering of the key interest rates to direct lending to the banks against riskier collateral. These monetary interventions, it has been argued in the media and by the majority of analysts, helped to ameliorate euro area sovereign crises. Per conventional wisdom, as the result of the central banks interventions, and particularly those carried out by the ECB, government bond yields and borrowing costs declined post-2011 across the euro area periphery. In addition, supporters of these policies have suggested that unconventional MPs were responsible for increasing equity funding in the real economies, thus supporting the recovery.

Rejecting the mainstream claims, the IMF researchers found that over 2008-2012 various monetary policies had zero statistical impact on the sovereign bond yields in Ireland, Portugal, and Greece. The policies have let to a moderate reduction in Italian Government bond yields, and a weak reduction in Spanish yields. In the case of Ireland, the IMF found no benefits to sovereign bond flows or prices that can be associated directly with the ECB interventions. Furthermore, ECB interventions were associated with outflows of liquidity from Irish equity funds. In contrast, Fed and Bank of England interventions resulted in net inflows of funds into Irish equities.

The paper clearly suggests that the ECB has not done enough to support recovery in sovereign debt and equity markets in the euro periphery.

Posted by TrueEconomics at 9:20 AM