IMF released its 11th review of Irish economy under the Extended Arrangement for funding. I covered growth-related issues arising from the IMF release here: http://trueeconomics.blogspot.ie/2013/10/4102013-imf-11th-review-of-ireland.html

Now, some other topics, namely banks and the Exchequer.

What's that about? Here are two charts: 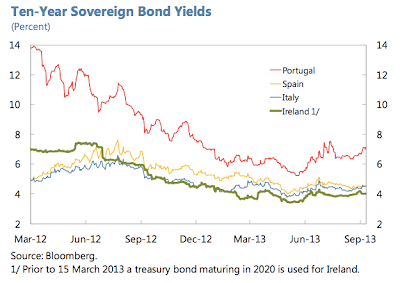 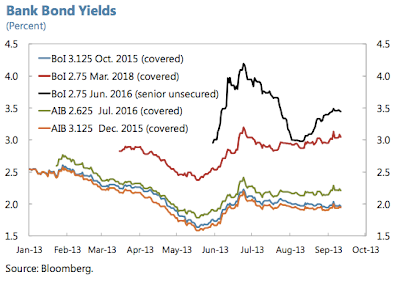 IMF: "The recent retracement of Irish sovereign bond yields has been broadly consistent with the experience of other countries in the euro area periphery." [But wait, what about Ireland's unparalleled success in fiscal adjustments and 'best-in-class' status? Are the IMF saying that Enda did not singlehandedly deliver huge improvements in Irish bonds yields? How can this be the case, unless the Irish Government uses 'we' as denoting 'Peripheral Countries' collective in claims that the Govenment has delivered stabilisation of Government funding costs.]

"After touching record lows in early May, the 10 year yield has risen 56 basis points, to 3.98 percent as of September 11. Market tensions dissipated in July after the settlement of the political crisis in Portugal and recent turbulence in emerging markets has had limited effect on Irish bond yields. No new bond has been issued by the Irish sovereign since the €5 billion ten-year issue in mid March." The latter, of course simply means that lower supply of new bonds (lack of it since mid-March) and now the new announcement by NTMA that it will not be tapping the markets any time before official exit from Troika supports, are keeping things steady in yields terms. Otherwise… well… logic suggests, at least speculatively, they can be higher.

And on banks: "From a trough in mid-May, yields on Bank of Ireland (BoI) and Allied Irish Banks (AIB) 3 year covered bonds have edged up some 40 basis points as of September 11. Since its May 30 issuance, the yield on BoI’s 3 year senior unsecured bond has been more volatile, but overall has risen by 62 basis points, to 3.37 percent."

Bah! Two things to say about the above:


"Deposit rates continued to inch downward, however, and ECB borrowing by domestic banks fell from €39.6 billion at end March to €33.4 billion at end August, reflecting a paucity of new lending, further noncore asset deleveraging, modest amounts of new market funding, and a broadly stable deposit base."

So cheap funding dissipating, deposits (stable funding) still anaemic or declining… Happy times, folks. Stabilisation bites. Come back and argue that when businesses and households are croaking under the weight of interest on their debts with the above 'improvements'.


On the positive side, Exchequer performance was good. Not spectacular, but fine - in line with (and slightly better than) budgetary targets: 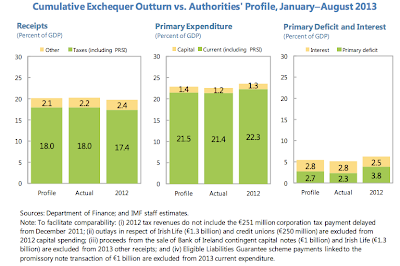 Do note the caveats listed below the charts - it would be nice were the Irish authorities actually provided a clear, consistent and well-defined map of all one-off payments and receipts… but then the picture of the fiscal adjustment would not have been as pretty as our politicians like to claim. Still, the picture is broadly fine.

Crucially, the above is not sufficient for us to rest on our laurels. For a number of reasons, but chiefly for the reason not even mentioned in the IMF note: has anyone looked at how sustainable, over the medium (2015-2020) term the fiscal savings delivered by the Government are? I mean: we know that pay moderation agreements with public sector unions are not sustainable and even subject to automatic reversals in 2015-on, right? We also know that much of health system 'savings' are not sustainable, since these come on foot of extracting more and more cash out of ever-dwindling supply of private insurance holders. Right? What else is not sustainable? How much? What is the risk down the line? Is corporate tax revenue uplift we have seen over the last 24 months or so sustainable? Much of it seems to have come from MNCs booking more transfer pricing profits into Ireland. Is that 'sustainable'?

IMF does some 'sustainability' tests in its analysis and here is a scary chart: 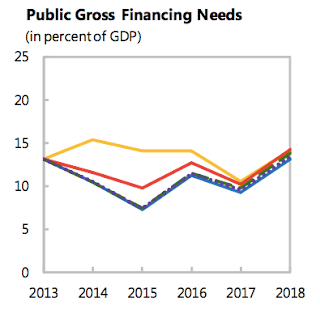 Basically, note the path of the gross financing needs for Ireland through 2018. This returns us, under baseline (no new shocks) scenario back to the situation in 2018 where financing needs of the Exchequer are slightly above the needs in 2013. This is assuming GDP is growing 2.5% annually in real terms 2015-2018. And this is incorporating the 'savings' achieved from the Promissory Notes. And this is after we impose agreed target cuts of 2014-2015. We are swimming faster and faster to be thrown back, not even to stay put.

So in Constant PB Scenario, the change is with no 2014-2015 'austerity' factored in, which is boring stuff. But the exciting stuff is the 'Historical Scenario' where things slide back to 'normal' on growth and government deficits:

The outcome of the above in two charts:
1) Public debt explodes 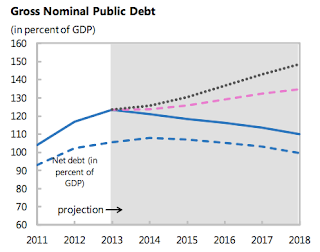 2) Financing needs of the Government explode too 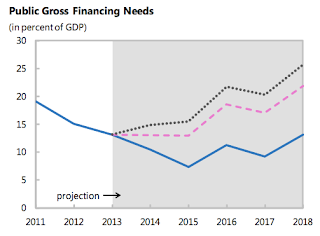 Care to argue now we can afford a 'stimulus'? As Harry Callahan put it: "Go on, punk, make my day!"
Posted by TrueEconomics at 4:34 PM