In the previous post (http://trueeconomics.blogspot.com/2013/10/31102013-nairu-or-ndru-euro-area.html?spref=tw) I covered the latest unemployment and inflation stats for the Euro area in the context of economic growth conditions. Now, let's update the data for Euro area leading growth indicator, eurocoin: 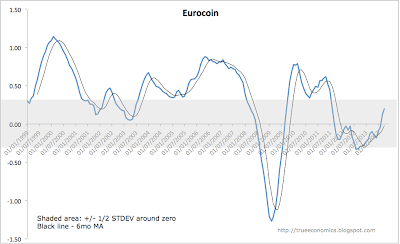 Eurocoin rose in October 2013 to 0.20 from 0.12 in September, marking the second consecutive month of the indicator reading above zero. However, eurocoin failed to reach statistically significant levels once again. This implies that the recovery is weak, and subject to serious risks. 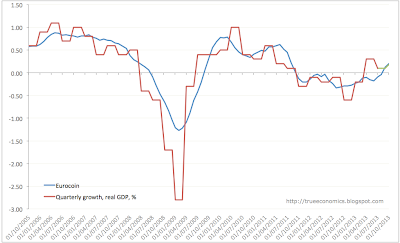 In relation to inflationary pressure, eurocoin is now signalling expansion that is not sustained by underlying domestic activities: 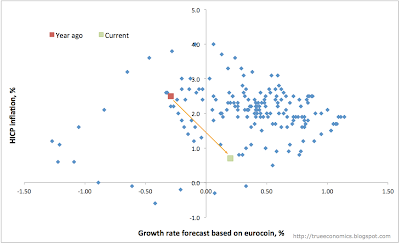 The above conjecture is supported by analysis of eurocoin core components, showing that the latest improvements came from equity markets indicators (as in September) and also from improved industrial production and exports. Industrial production gains were in turn driven primarily by Germany, while composite PMIs remained generally in the negative territory. Meanwhile, consumer sentiment deteriorated, including in Germany (though it stayed in the positive territory there).