Via BusinessInsider: http://www.businessinsider.com/europes-cities-in-one-chart-2013-10 Here's a chart showing the impact of the crisis on major cities: 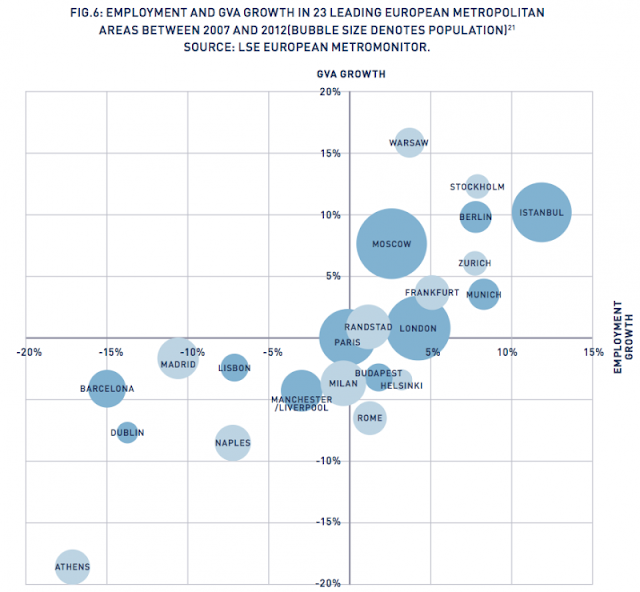 Notice the position of Dublin as the second or third most adversely impacted city. And notice our position in terms of GVA (Gross Value Added) growth. We also represent the worst-impacted small city in the sample. Stripping out the positive effects of growth in MNCs-driven services exports and superficial transfer pricing boom delivered by the likes of Amazon, Google et al, we would be much closer to Athens in terms of overall impact.
Posted by TrueEconomics at 1:25 PM

How does this make sense? I know that the data tells the story that is on the ground. But how come it happened that Dublin became a 'destination point' within Europe and the globe for so long recently, and then it just happens to fall off a cliff overnight?

It is like every time, Dublin as a city tries to make something of itself, it gets severely hammered, by its bigger brother, the island of Ireland.

And that is what has happened in the last few years.

At the same time as the administration will have it as their place of residence, they also want to drag it down to whatever appalling standard is deemed to be good enough for the 'rest of the island'.

Dublin is a kind of place, that always could have made something of itself, except it couldn't get very far because it had a less ambitious society at large, dragging it back down.

I have heard many people, from diverse backgrounds give their opinion of Dublin in recent years, and very few people have anything complimentary to say.

But to me, that is maybe the wrong way to look at it.

I think, the only crime that Dublin as a city ever committed, was being part of something called Ireland. While all of the talk throughout the 1990s and going into the 2000s, was about Dublin being a 'global' city, and a European city. And we all bent over back ways to make it into something of that nature.

As long as Dublin is tied to something called Ireland, it will always be a whipping boy, as far as I am concerned.

And it goes back a long, long ways too. It is not the first time that Dublin has fallen off of a cliff. It happened after the last big building boom too, in the Georgian days.

I blogged about this a long while ago too, and I came to a strong conclusion, that trying to define policy for somewhere such as Dublin, and for someplace like the western part of the island, is a fool's errand.

The quicker that Dublin gets its autonomy for Ireland, and the rest of Ireland gets itself on its own path, it would be by far the better for everyone.

But as a street vendor in Dublin once said to me, the culshee's run this town. Dublin has always been the place, where Mayo, or Cork or somewhere had to come to it, and take it over. And the reason, is something that no one can ever seem to figure out.

And by 'taking it over', I mean, its like find some tiny little intersection of the venn diagram, where some of the interests of Dublin city, might coincide with the interests of the island at large, . . . and that is what we normally refer to as 'leading the country'.

But the fact is, it's not leading and never was. And it goes back centuries into our history. Centuries.

Thinking about Dublin and Ireland, is sort of like thinking about Hong Kong and mainland China. Except in that case, they don't try to find something that works for Hong Kong, and then works for the rest of Asia.

When the so-called 'crisis' hit in 2008, Dublin was already re-organizing itself to create new kinds of enterprise and sustain itself in many new and interesting ways.

The problems that parts of Ireland, other than Dublin city had, had existed a long time prior to 2008. When the 'crisis' hit us in 2008, it gave politicians the perfect excuse to blame opportunity to mis-interpret those problems, which had existed in the larger island of Ireland, and simply explain it away as the crisis.

We then go through this ineffectual process, where we try to merge the two problems together - the longer term ones of the island of Ireland, and the shorter term ones of Dublin as a city.

In other words, Dublin as a city doesn't see any of the sort of thinking that it requires. And the larger and deeper problems of the remainder of the island of Ireland, are not approached in the right manner either.

The national level governments in Ireland, like to be located in Dublin city, because of the fact that they can point to short term measures that the city is taking to fix itself - and say, look, this is what we are doing for the island as a whole.

And you see the problem?

Even though, nothing substantial is being done for the island at large, Dublin is always there to provide the examples of success stories at national level government. And when Dublin as a city is genuinely doing well, it gets draged back down by the failure or inability to address the problems of the island at large.

One can see how in Ireland, how the political class and their clever PR goons are constantly working this window dressing sort of angle, as a means to salvaging their own credibility.