As promised in the earlier post, focusing on Corporate Debt Overhang (http://trueeconomics.blogspot.ie/2013/10/10102013-imfs-gfsr-october-2013-focus.html), I am covering in a series of posts the latest IMF GFSR.

Let's take a look at the banking sector focus within the GFSR: 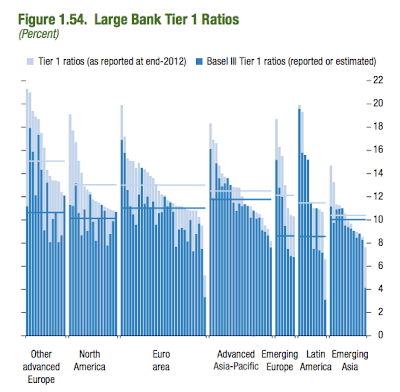 Note the relatively healthy position of the euro area banks on the basis of Tier 1 capital ratios. However, when it comes to leverage, the chart below shows a ratio of tangible equity to tangible assets (the so-called Tangible Leverage ratio). The higher the number in the first chart above, the lower is the capital ratio ('bad thing'), the higher the number is in the chart below, the higher is the ratio of equity to assets ('good thing'): 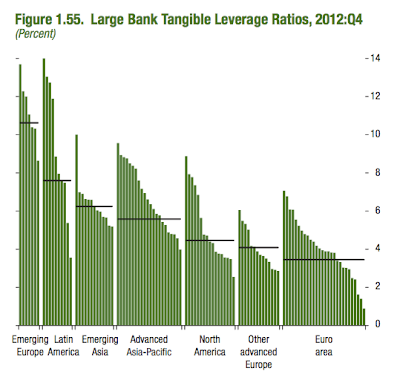 So euro area banks are doing fine by Tier 1 capital, but are not fine by leverage... As the rest of the IMF analysis highlights, much of this aberrational result arises from the nature of the euro area banking model (assets-heavy 'universal banking' model), plus, as IMF politely puts:

"The conflicting signals also highlight the  importance of restoring investor confidence in the accuracy and consistency of bank risk weights. This also suggests that risk-weighted capital ratios should be supplemented by leverage ratios, as proposed in the Basel III framework."

GFSR is deadly on profitability of banks and equity valuations. Here's the key chart: 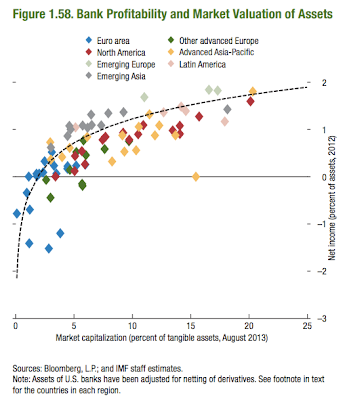 Notice the concentration of euro area banks at the bottom of the distribution. Still think Irish banks shares held by the Exchequer are worth EUR11 billion?.. really?.. By the chart above, they should be valued at around 2-3% of their tangible assets... which would be what? Close to EUR6 billion, maybe EUR9 billion. Which refers to all Irish banks. Listed, unlisted, foreign, domestic... And to all their equity... not just the equity held by the Exchequer.

"European banks have been deleveraging in response to market and regulatory concerns about capital levels, and may continue to do so. ...a combination of market and regulatory
concerns about bank capitalization has already led to an increase in capital levels at EU banks. …Over the period 2011:Q3–2013:Q2, large EU banks reduced their assets by a total of $2.5 trillion on a gross basis — which includes only those banks that cut back assets — and by $2.1 trillion on a net basis."

So you thought it was surprising/unusual/unexpected that the banks are not lending? Every policymaker harping on about banks credit 'growth' should have known this deleveraging is ongoing and with it, no new credit growth will occur… I mean USD2.5 trillion!

"…About 40 percent of the reduction by the banks in the EU as a whole was through a cutback in loans, with the remainder through scaling back noncore exposures and sales of some parts of their businesses… As discussed in the April 2013 GFSR, banks have been concentrating on derisking their balance sheets by reducing capital-intensive businesses, holding greater proportions of assets with lower risk weights (such as government bonds), and optimizing risk-weight models."

Put differently, to beef up capital ratios, the banks shed primarily riskier loans. Now what these might be? Oh, yes, SMEs and non-financial corporate loans in general… So that 'credit growth' to SMEs?..

"The capital ratio projection exercise previously discussed suggests that some banks will need to continue raising equity or cutting back balance sheets as they endeavor to repair and strengthen their balance sheets."

Note: my recent article on European banks is here: http://trueeconomics.blogspot.ie/2013/10/9102013-leveraged-and-sick-euro-area.html
Posted by TrueEconomics at 7:21 PM