Live Register numbers for October released yesterday are pretty good, for a change.

Compared with Q1 2011 average - the last period prior to the current Government coming into office, Live Register is down 3.8% in the last 3 months through October 2013. 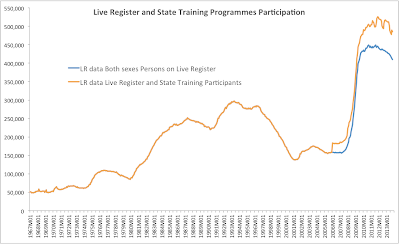 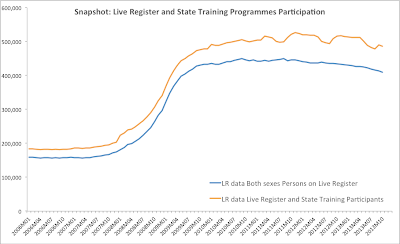 Two charts above also show Live Register with State Training Programmes participation added to it (LR+STPP). This broader measure of LR currently stands at 485,850 in October (I use September figure for STPPs as this is reported with one month lag). Assuming this holds, LR+STPP numbers are now 5.8% below where they were in October 2012 (note, September STPP figure more likely underestimates the October numbers, as there is very strong volatility and seasonal increases in September-November).

This contrast with 3.7% decrease in LR+STPP recorded in September. Now, again - keep in mind that September numbers are the true comparative, as they are reflective of the recorded levels of STPPs.

Back to october figures. The trend for LR+STPP is now to the downside when we strip out some of the monthly volatility. 3mo MA for LR+STPP currently runs at 1.35% lower than 3mo MA through July 2013 and is down 4.2% y/y. This confirms the decline of 2.4% recorded in LR+STPP y/y basis for the 3 months through July 2013.

Broadly-speaking, the numbers are encouraging.

Another interesting trend in the LR participation by the under-25 years of age: this is down massive 10.4% y/y in October and was down 10.3% in September. On 3mo MA basis, the figures are down 10.4% y/y and are down 3.4% on previous 3mo MA through July 2013. I wonder how much of these declines is due to cuts to benefits and expirations of benefits and younger people removing themselves out of the labour force. 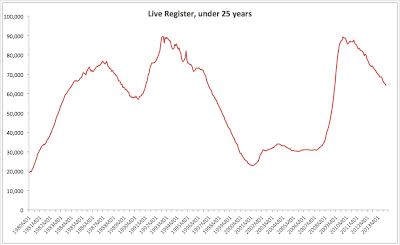 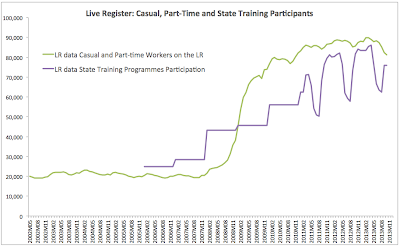 Summary: overall we have encouraging changes in the LR. More analysis is needed to decompose these into jobs creation numbers as opposed to benefits expirations and emigration. More current data is needed on State Training Programmes participation (this will be available for October when November LR is released). A summary of changes is shown in the chart below: 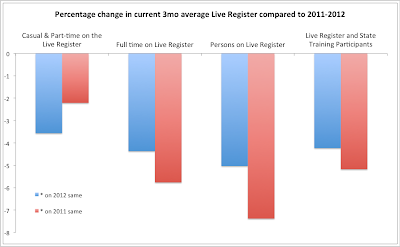 Updated: Revealing some of the mysteries of 'improving' Live Register, here's an article from The Examiner: http://www.irishexaminer.com/budget/news/reality-behind-live-register-stats-246183.html
Posted by TrueEconomics at 10:10 AM

I chair a tidy towns committee - the local Leader Development Company (also hiring TUS supervisors) strongly pushed 5 TUS workers to our committee. Where are these five people (who give 19.5 hours per week to our organisation while retaining existing benefits and getting 50 Euro extra per week) recorded in this month's LR figures? Many other clubs and organisations around town also have TUS workers - placement is only for a year and then back to LR at present.