This is an unedited version of my Sunday Times column from November 10, 2013.

Depending on which measure one uses Ireland slipped into the Great Recession as far back as in the mid-2007. Since then and through the first half of this year, our nominal Gross Domestic Product is down 15.3 percent or EUR14.55 billion. Despite the claims about the return of growth, played repeatedly from early 2010, our economy posted 19 quarters of negative growth and only 7 quarters of expansion.

These numbers reveal the unprecedented collapse of the domestic economy, ameliorated solely by continued growth in exports, primarily driven by the multinationals. At the end of last year, total exports of goods and services from Ireland were up 16 percent on 2007 levels. However, the latest global and domestic trends suggest that this growth is at risk from a number of factors. These include both the well-known headwinds that are currently already at play, as well as the newly emerging signs of distress.

The former cover the adverse impact of the ongoing patent cliff in pharmaceutical sector and the continued migration of manufacturing to Eastern and Central Europe and Asia-Pacific. Added pressures are building up from our competitors for FDI, such as the Netherlands, Belgium, Sweden, Finland and, more recently, Austria.

The risks that are yet to fully materialise, however, pose a threat to the biggest post-2007 success story Ireland has had - the Information and Communications Technology (ICT) services. This sector, most often exemplified by the tech giants, such as Google and blue chip firms such as Microsoft. More trendy and smaller players include the games developers, cloud computing and data analytics enterprises, as well as on-line marketing and advertising companies.

While easy to discount as being only potential, these threats are worrying.

Since 2007, goods exports from Ireland grew by a cumulative 2.1 percent, against 33 percent growth in exports of services. If in 1998-2004 goods exports averaged over 67 percent of our GDP, today this share has declined to 51 percent. Meanwhile, share of services exports rose from an average of 23.3 percent of GDP in 1998-2004 period to 58.4 percent projected for this year. More than half of this growth came from ICT services.

More importantly, as the Budgets 2012-2014 have clearly shown, the Government has no coherent plan for supporting the growth capacity of the domestic economy. This means that the entire economic strategy forward remains focused on the ICT services to deliver growth in 2014-2015.

And herein lies a major problem. Increasingly, international markets and global developments are signaling the emergence of an asset bubble within the ICT services sector. These signs can be grouped into three broad categories.

Firstly, we are witnessing the development of a bubble in investors' valuations of the ICT companies. Controlling blue chips, tech valuations have grown over the last decade at a pace roughly double that found in other sectors. Many tech stocks are currently trading in the range of 25-50 times their sales, dangerously close to the levels last seen at the height of the dot.com bubble. Last 18 to 24 months have also seen a series of tech IPOs with post-listing annual returns in 50 percent-plus ranges - another sign that investors are rushing head-in into the sector. Meanwhile, blue chip technology companies are trading near or below their multi-annual averages, suggesting that hype, not real performance is the driver of the market for younger firms. MSCI ACW/Information Technology benchmark tech stocks index is up ca 90 percent over the last 5 years. Recent research from PWC shows that IT sector M&A deals in Q3 2013 were up 34 percent year on year.

Secondly, costs inflation is now driving profitability down across the sector. Take for example Ireland. In 4 years through June 2013, average weekly earnings in the economy fell 1 percent. In the ICT sector these rose 11 percent. Back in Q2 2009, ICT sector posted the third highest average weekly earnings of all sectors in the Irish economy. This year, it was the highest. Other costs are inflating as well. Specialist property funds with a focus on the tech sector, such as Digital Realty Trust, are awash with cash from their massive rent rolls.

CSO publishes a labour market indicator, known as PLS4. This combines all unemployed persons plus others who want a job but are not seeking one for reasons other than being in education or training and those who are underemployed. In Q2 2013 this indicator stood at nearly one quarter of our total potential workforce. Yet, the ICT services sector has some 4,500-5,500 unfilled vacancies. With tight labour supply, stripping out transfer pricing in the sector, value-added is stagnating in the sector, implying lagging productivity growth.

Thirdly, as in any financial bubble, we are nearing the stage where the smart money is about to head for the doors. In recent months, seasoned investors, ranging from Art Cashin, to Tim Draper to Andressen Horowitz announced that they cutting back their funds allocations to the sector.

To see how close we are getting to forming a bubble, look no further than the recent fund raising by Supercell - a games company - which raised USD1.5 billion in funding in October. The firm has gone from zero value to USD3 billion in just three years on last year profit of just USD40 million. The investor who financed the Sueprcell deal, Japan's Masayoshi Son is now declaring that he is investing based on a 300-year vision for the future. Expectations and egos are rapidly spinning out of synch with reality. In tandem with this, Irish politicians are vying for any photo-ops with the ICT leaders and industry awards, summits and self-promotional gala events are musrooming. In short, the sector is becoming a new property boom for Ireland's elites.

Global ICT services sector hype is pushing up companies valuations across the sector and delivering more and more FDI into Ireland. This is the good news. The same hype, however, also brings with it an ever-increasing international exposure of Ireland's tax regime, the main driving reason for the MNCs locating into this country. This, alongside with rampant wages inflation and skills shortages, is one of the top domestic reasons for the tech-sector vulnerability.

Overall, risks to the ICT services sector are material for Ireland. Our economy's reliance on the tech sector FDI has grown over time, and even a small contraction in the sector exports booked via Ireland can lead to us sliding dangerously close to once again posting negative current account balance.

Our capacity to offset any possible downturn in the sector with other sources of growth has been diminished. Post-2001 dot.com bust we compensated for the collapse in ICT and dot.com companies activities by inflating property and Government spending bubbles. This time around all three safety valves are no longer feasible. Between Q1 2001 and Q2 2003, ECB benchmark repo rate declined from 4.75 percent to 2.0 percent. Today, the ECB rates are at 0.5 percent and cannot drop by much into the foreseeable future.

Besides credit supply, there is a pesky problem of credit demand. The evidence of this was revealed to us last week, when we learned that the Government Seed and Venture Capital Scheme (SVCS) and the Micro-enterprise Loan Fund turned out to be a flop. Both schemes are having trouble finding suitable enterprises to invest in. May we wish better luck to yet another ‘state investment vehicle’ launched this week, the ‘equity gap’ fund for medium-sized companies.

Ireland's policymakers today have little to offer in terms of hope that we can weather the next storm as well as we did ten years ago.

Based on numerous multi-annual initiatives by the Government and business lobbies, Ireland’s 'new school' of economic thinking post-crisis is solidly focused on tax incentives to rekindle a new property and construction boom and on advocating more Government involvement in the economy. The latter includes such initiatives as more state investment and lending schemes for SMEs, a state bank, state-run agencies to sell services to foreign state agencies, state-supported access to exports markets, and state-funded R&D and innovation.

This reality is compounded by the fact that in recent years, much of our development agencies attention has focused on attracting smaller and less-established firms and entrepreneurs from abroad to locate into Ireland. Both IDA and Enterprise Ireland have active campaigns courting these types of ventures. Of course, such efforts are both good and necessary, as Ireland needs to continue diversifying the core base of MNCs trading from here. Alas, it is a strategy that not only brings new rewards, but also entails new and higher risks. Should the tech sector suffer significant market correction, in-line with dot.com bubble bursting or banking sector crisis, majority of the younger firms that came to Ireland to set up their first overseas operations here will be downsizing fast. Unlike traditional blue-chip firms, these companies have no tangible fixed assets. They own no buildings, employ few Irish workers and have no technology domiciled here. For them, leaving  these shores is only a matter of booking their flights.

In short, our policy and business elites seem to be flat out of fresh ideas and are ignorant of the potential threat that our over-concentration in ICT sector investment is posing to the economy. Let’s hope the new bubble has years to inflate still, and the new bear won’t be charging any time soon. 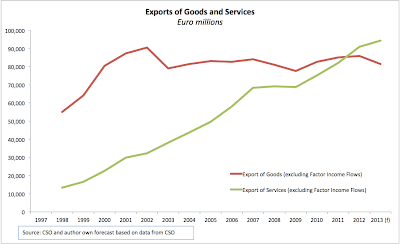 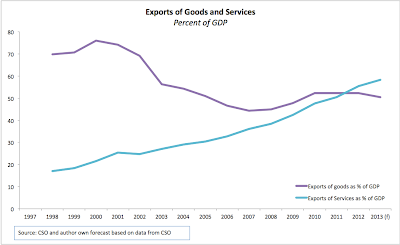 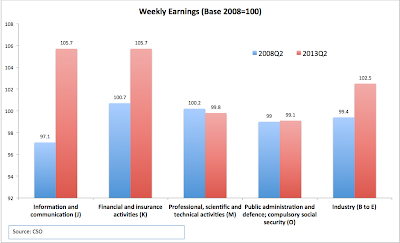 Update: new article on the topic from the BusinessInsider: http://www.businessinsider.com/4-billion-is-the-new-1-billion-in-startups-2013-11

Just when you thought the Euro crisis is nearing its conclusion, here comes a new candidate state to join the fabled periphery.  Last week, the IMF concluded its Article IV consultation assessment of Slovenia. The Fund was more than straightforward on risks and problems faced by the country bordering other ‘peripheral’ state – Italy. Per IMF: “Slovenia is facing a deep recession resulting from a vicious circle of strained corporate and bank balance sheets, weak domestic demand, and needed fiscal consolidation. Cleaning up and recapitalizing banks is an immediate priority to break this cycle.“ Some 17.5 percent of all assets held by the Slovenian banks were non-performing back in June 2013. Worse, over one third of all non-performing loans were issued to 40 largest companies in the country, putting strain on the entire economy. Corporate debt is so high in Slovenia, interest payments account for 90 percent of all corporate earnings. If that is a ‘cycle’ one might wonder what constitutes a full-blow crisis? Spooked by the Cypriot crisis ‘resolution’, Slovenian Government has so far rejected the use of international assistance (re: Troika funding) in addressing the crisis. However, the country fiscal deficit is running at 4.25 percent of GDP, net of banks’ restructuring and recapitalisation costs. In other words, Slovenia today is Ireland back in 2010. Brace yourselves for another Euro domino falling.

Posted by TrueEconomics at 2:51 PM