So things are getting better with mortgages arrears crisis… practically easing the worries of the nation, according to the Irish media and officialdom… And the Central Bank is delighted that the banks are so actively meeting targets etc… (Note: my coverage of the arrears figures is here: http://trueeconomics.blogspot.ie/2013/11/28112013-irish-mortgages-arrears-q3-2013.html)

Per Central Bank: “We expect that lenders will continue to progress and develop their approaches to ensure that future sustainability targets will be achieved.  With indications the banks are now offering long term sustainable solutions to customers, the Central Bank continues to encourage meaningful engagement between lenders and borrowers.”

And what these 'sustainable solutions' might be, you should ask?

Per CB: "As at end of September 2013 the lenders in total reported they had issued proposals to 43% of mortgage accounts in arrears against a target of 30%." 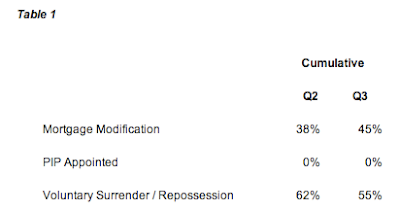 Now, let me be forthright here on my views:
1) Repossessions and voluntary surrenders are a part of the solutions tool kit and are unavoidable (and indeed optimal) in a number of cases.
2) However, the above can only be deemed sustainable if and only if they take place in the context of first (ex-ante repossession or surrender) concluding arrangements between borrower and lender on what is to be done with the residual balance on mortgage remaining at the end of the property sale.

Since we do not know what percentage of all repossessions and surrenders were accompanied by such an agreement, we do not know if there is ANY (repeat - any) sustainability of debt has been achieved in the process of such a resolution. In other words, the Central Bank cannot make a factual claim that 55% of the resolution measures proposed were sustainable (aka meet the CB own criteria for them satisfying the target requirement).

Worse, the massive number - 55% - is itself an indication that the entire Central Bank-led process is a complete failure. In fairness to the Central Bank, the language of the release (http://www.centralbank.ie/press-area/press-releases/Pages/CentralBankpublishesoutcomeofMortgageArrears.aspx) suggests that the bank is not entirely happy with the status quo distribution:

"There has been a change in the trend of proposed solutions from Quarter 2 to Quarter 3. In Quarter 2 62% of the proposals were in the Surrender/Repossession category, which decreased to 55% in Quarter 3."

But there are problems even with this claim. Firstly, there is no trend. There is not enough time series data to show ANY (repeat - any) trend up or down in the data. What we have is one quarter against another. Should the 'trend' of 7 percentage points per quarter continue, we will end 2014 with over 40% 'resolutions' leading to foreclosures or surrenders of properties. Given the bank wants to deliver 75% resolutions target by the end of 2014, this would imply that more than 40% of the mortgages accounts in arrears will be in liquidation. That is a trend to a national disaster.
Posted by TrueEconomics at 5:59 PM