This is an unedited version of my Sunday Times article from November 17, 2013.


Back in the early 2011, with the new Government coming into the office, fresh ideas were filling the airy halls of the Department of Finance. Armed with the knowledge that Irish pensions industry was the last vault in the country that still had money in it, Minister Noonan focused his sights. Hitting private pensions was a preferred alternative to raiding banks deposits or imposing cuts to public sector pensions. It suited the pseudo-fairness agenda of the Labor. Better yet, setting a levy on private pensions funds would, in PR-speak, allowed Fine Gael to avoid 'increasing taxes'. The fat cats (private pensions investors) were to share the burden of the fiscal adjustment while the Government was riding a high horse of delivering a rhetorical victory for the little man. The real logic of the move was exactly in line with the reasoning used in continuously raiding health insurance policies: go after the money.

Economics of the measure swept aside, the Government got busy expropriating private property and weakening the system of future pensions provisions. A temporary pensions levy was born out of this. With it, the country was firmly put on the road to a comprehensive dismantling of the already dysfunctional system.

Set at 0.6 percent per annum for 2011-2014 the original levy was dressed up in 2011 as a measure to free unproductive savings to fund jobs creation in the economy. Budgets 2012 and 2013 followed up with a raft of other measures, all designed to take more cash out of savings. Budget 2014 not only failed to curtail this onslaught but created a new levy of 0.15 percent that will run over 2014-2015 period and, according to a large number of analysts, is expected to continue beyond the 2015.

Yet, as the documents recently released by the Department of Finance show, back in 2011, the Department briefed the Minister as to the fallacy of his thinking. At the time, the pensions deficits accumulated in the Irish system totaled EUR10-15 billion. These deficits, according to the briefing, were in excess of what the nation's employers and employees could shoulder even before the Government moved on the funds. Between 75 and 80 percent of all Defined Benefit funds in the country were technically insolvent, accounting for two thirds of all pensions.

The Minister also had to be aware that a tax on capitalised value of the funds amounted to expropriation of private property. And that it cuts across the serious warnings concerning our pensions sustainability coming from the Troika and the OECD.

The problems with this approach to pensions systems are manifold and are setting us up for a long-term crisis. They include: exacerbating catastrophic pensions shortfalls, reducing future credibility of the system and undermining public confidence in the security of our financial system. Increasing future pressures on the Exchequer finances stemming from demographic changes and the legacy of the current crisis is the direct corollary of the short-termist position adopted by the Government.


Irish pensions system is fundamentally insolvent today and this insolvency is only made worse by our policies.

Top figures speak for themselves: at the end of 2012, there were 232,939 Defined Contribution schemes members, 527,681 Defined Benefit schemes signees and 206,936 PRSAs. Inclusive of PRSAs, total capitalisation of the system was around EUR78-79 billion. Defined Benefit schemes made virtually no contributions to the capital pool backing pensions system in the country. Excluding PRSAs, almost 7 out of 10 Irish pensions were funded by the IOUs on future taxpayers and company employees. The cumulated potential obligations in the pensions provisions of the Defined Benefits schemes amounted to some EUR 165 billion or around 100 percent of Ireland's GDP. These are growing, fuelled by early retirement schemes in the public sector and exits of private sector Defined Contributions savers.

Private pensions in Ireland remain not only underfunded, but also insufficient in cover. Currently, Ireland ranks the lowest in the OECD in terms of net pensions wealth held for those earning at or above average wages. Things are somewhat better for those on lower incomes. Still, we rank below OECD mean in terms of pensions cover for workers earning less than the average wage. An Irish family with two earners and combined annual earnings of around EUR90,000 can expect a pension cover of 40% of the pre-retirement earnings for 10.5 years. Budget 2014 has reduced this number by at least 0.5 years. OECD average for such coverage is closer to 28 years. OECD estimates show that at the end of 2009 only 41.3 percent of our public and private sectors’ workers were enrolled in a funded pension plan.

Since the beginning of the century, the systematic policy approach adopted by the Irish Governments to dealing with the pensions crisis has been to rely on Defined Contribution schemes to plug the vast deficit in the Defined Benefit schemes. The former are dominant in the private sector, the latter are the cornerstone of the public sector. Since the onset of the crisis, Irish state has acted to level huge burden of fiscal adjustment on future retirees, with levies and tax adjustments reaching into billions of euros and rising rapidly. The measures hit hard not only the savers at the top of the income distribution, but ordinary middle class investors. For example, according to a recent report on Budget 2014 measures, a young worker setting aside annually some EUR2,500 as a starting pension in 2011 will see a life-time cost of the pensions levies reach EUR32,500. He or she will face a reduction of EUR1,625 per annum in annual retirement benefits thanks solely to levies alone.

All of this is gradually eroding the public credibility in the system and acts to lower future solvency of the private and public schemes. According to the Pensions Board and OECD data, Ireland pensions coverage is declining over time. The numbers of workers covered by both, Defined Benefit and Defined Contribution schemes have fallen steadily since 2006 for the former and 2008 for the latter.

This trend is compounded by the nature of the crisis that hit Ireland since the end of the Celtic Tiger era. Unprecedented collapse in property markets triggered massive destruction of household wealth and catastrophic inflation of the debt crisis for households that are nearing the age when they normally accelerate their pensions savings.

Despite this, the Government continues to reduce tax deferrals available for those retirement savings. Examples of such policies include changes to lump sum payments tax treatments, changes to the Standard Fund Threshold, elimination of the PRSI and health levy/USC relief and so on. In effect, pensions funds became a ground zero of the Irish Government-waged war of financial repression – a brutal and cynical policy aimed at protecting own interests at the expense of the future retirees.


The OECD report on Irish pensions system, presented to the Government earlier this year, before Budget 2014 contained the usual litany of complaints about the system.

These include the fact that Ireland does not have a mandatory earnings-related pensions system to complement the State pension at basic level. According to the OECD, as a result, Ireland "faces the challenge of filling the retirement savings gap to reach adequate levels of pension replacement rates to ward off pensioner poverty." Furthermore, private pension coverage, both in occupational and personal pensions, is uneven and needs to be increased urgently. The latest changes introduced in Budget 2014 clearly exacerbate this, and the Government cannot claim that it was not aware of this problem. The existing tax deferral structure in Ireland, based on marginal tax rates, provides higher incentives to invest in pensions for higher earners, resulting in severe pensions under provision for middle classes. The OECD identified "unequal treatment of public and private sector workers due to the prevalence of defined benefit plans in the public sector and defined contribution plans in the private sector."  The reforms aiming to address this gap by introducing new pensions scheme for public servants are "being phased in only very slowly and [are] unlikely to affect a majority of public sector workers for a long time".

The OECD produced a long list of recommendations for the Government aimed at improving the system design and addressing some of the above bottlenecks. Virtually none of these saw any significant action.

The two options for a structural reform of the State pension scheme recommended by the OECD: a universal basic pension or a means-tested basic pension remain off the drawing board. Explicitly, OECD stated that “to increase adequacy of pensions in Ireland, there is a need to increase coverage in funded pensions. Increasing coverage can be achieved through 1) compulsion, 2) soft-compulsion, automatic enrolment, and/or 3) improving the existing financial incentives.” Instead, the Government continues to treat private pensions savings as funds it can raid to raise quick revenues. This makes it impossible for broad and structural reforms to gain support of the public, undermining in advance any future effort to address the crisis we face. 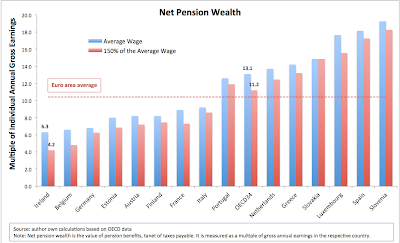 In economics terms, it is often impossible to put a hard number on the value of less tangible institutional capital of the nation. Yet, systems and institutions of governance and democratic participation do matter in determining nation’s economic capacity and competitiveness. Sadly, it appears that the Irish Government is giving the idea that open and transparent state systems are a necessary condition for building a sustainable and prosperous economy and society little credit. Instead, the Irish authorities are about to significantly restrict effective access to state information. To do so, the Government is planning to introduce a new, more complex and expensive system of fees that apply to the requests filed under the Freedom of Information Act. Some observers have been arguing that the true objective is to reduce the public disclosure of information. Others have suggested more benign reasons for the proposals. Irrespective of the motives, over time, these changes are likely to lead to greater opacity and lower accountability across the State and private sectors. Such trends usually go hand-in-hand with increases in corruption, mismanagement, poor design of public policies, and increased political and civic apathy. In the long run, the proposed reforms can, among other things, spill over into generating greater economic inefficiencies, less meritocratic distribution of resources, and distort returns to investment. They can also reduce our attractiveness as a destination for domestic and foreign investors, entrepreneurs and workers. The victims of poor governance that can arise on foot of any effort to reduce effective access to information will be both the Irish society and our economy.

Posted by TrueEconomics at 8:56 PM