The banks stress tests are coming up and the Euro periphery system is quickly attempting to patch up the massive cracks in the facade. The key one is the continued over-reliance of banks on sovereign-monetary-banking loop of cross-contagion. The banking system weakness is exemplified by Italy: Italian banks are the main buyers of Italian sovereign debt, which in turn means that Italian government stability rests on the banks ability to sustain purchasing, which implies that the ECB (with an interest of shoring up Italian economy) is tied into continuing to provide cheap funding necessary for the Italian banks to sustain purchasing of Italian Government debt… and so on.

Three key facts are clouding this 'stability in contagion' picture:

If all 3 risks play out at the same time or close to each other, things will get testy for the Euro.


Point 1: Banks in the euro zone continue to carry assets that amount to three times the size of the euro area economy. This puts into question the core pillar of banking sector 'reforms' that the ECB needs to see before the banking union (BU) comes into being. The ECB needs to have clarity on quality of assets held by banks and, critically, needs to see robust deleveraging by the banks before th BU can be launched. If either one of these conditions is not fully met, the ECB will be taking over the banking system that is loaded with unknown and unpriced risks.

Per recent ECB data, Banks in the euro zone held EUR29.5 trillion in total assets by the end of 2012. That is down 12% on 2008. Too slow of a pace for a structural deleveraging. Worse, the bulk of the adjustments was back in 2009 and little was done since. Which makes the level of assets problem worse: on top of having too many assets, the system has virtually stopped the process of deleveraging. Knock on effect is that the firming of asset markets in Europe in recent two years was supported by a slowdown in assets disposals by the banks. In turn, this second order effect means that many banks assets on the books are superficially overvalued due to their withholding from the market. Nasty, pesky first and second order effects here.

Capital ratios are up to the median Tier 1 ratio rising from 8% in 2008 to 12.7% in 2012. Quality of this capital is, however, subject to the above first and second order effects too - no one knows how much of the equity valuation uplift experienced by the euro area banks in recent months is due to banks reducing the pace of assets deleveraging…


Point 2: Assets quality in some large banking systems is too closely linked to the sovereign bonds markets. Italy is case in point. ECB tests are set to exclude sovereign debt risk exposures, explicitly continuing to price as risk-free sovereign bonds of the peripheral euro area states. But in return for this, the ECB might look into gradually forcing the banks to limit their holdings of sovereign bonds. This would be bad news for Italian banks and the Italian treasury.

The problem starts with a realisation that Italian banks are now primarily a vehicle for rolling over Government debt. Italy's Government debt is over EUR2 trillion. EUR397 billion of that is held by Italian banks. Another EUR200-250 billion can be safely assumed to be held by Italian banks customers who also have borrowings from these banks. Any pressure on the Italian sovereign and the ca EUR600 billion of Italian debt sloshing within the banking system of Italy is at risk.  That puts 20.7 percent of Italian banks assets at a risk play. [Note: by some estimates, Italian banks directly hold around 22% of the total Italian Government debt - close to the above figure of EUR397 billion, but way off compared to Spanish banks which are estimated to be holding 39% of the Spanish Government debt, hence all of the arguments raised in respect of Italy herein also apply to Spain. A mitigating issue for Spain is that it's debt levels are roughly half those of Italy. An exacerbating issue for Spain is that its deficit is second highest in Europe, well ahead of Italain deficit which is relatively benign).

Worse, pressure cooker is now full and been on a boiler for some time. In the wake of LTROs, Italy's banks loaded up on higher-yielding Italian Government debt funded by cheap LTRO funds - Italian banks took EUR255 billion in LTROs funds. In August 2013, Italian banks exposure to Italian Government debt hit EUR397 billion, just shy of the record EUR402 billion in June and double on 2011 levels. I

Either way, with or without explicit ECB pressure, Italian banks have run out of the road to keep purchasing Italian Government debt. Which presents a wee-bit of a problem: Italy needs to raise EUR65 billion in new debt in 2014. Italy is now in the grip of the worst recession since WWII and its debts are rising once again.

Chart below shows that:
1) Italian Sovereign exposures to external lenders declined in the wake of the LTROs, but are back to rising in recent quarters;
2) Italian banks reliance on foreign funding rose during the LTROs period, declined thereafter and is now again rising; while
3) Other (non-financial and non-state) sectors remain leveraged at the levels consistent with late 2006. 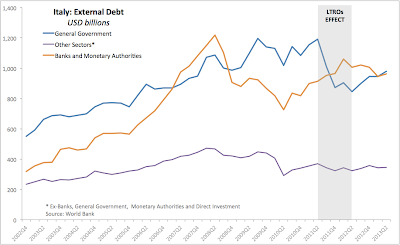 Point 3: Overall, Italian Treasury is now competing head on with the banks for foreign lenders cash and Italian corporate sector is being forced to borrow abroad in absence of domestic credit supply. Foreign investors bought almost 2/3rds of the last issue of Italian bonds, but how much of this appetite can be sustained into the future is an open question. Foreign investors currently hold slightly over a third of Italy's debt, or EUR690 billion, down from more than EUR800 billion back in 2011. The Italian Government is now turning to Italian households to mop up the rising supply. Italy issued EUR44 billion worth of inflation-linked BTP Italia bonds with 4 year maturity. As long as inflation stays low, the Government is in the money on these.

Next in line - desperate measures to raise revenues. Per recent reports, there is a proposal working its way through legislative corridors of power to raise tax on multinational on-line companies trading in Italy. The likes of Google, Amazon and Yahoo will be hit with a restriction on advertisers to transact only with on-line companies tax-resident in Italy, per bill tabled by the center-left Democratic Party (PD). The authors estimate EUR1 billion annual yield to the state - a tiny drop in the ocean of Italian government finances, but also a sign of desperation.
Posted by TrueEconomics at 1:35 PM