Having spent the entire weekend in the Marble City at Kilkenomics 2013, I hardly had any time to read through many articles on arts and sciences this week. Hence, this week's WLASze: Weekend Links on Arts, Sciences and zero economics will be short.


For a popular science magazine, this article doesn't quite get high accolades for being either well-written or insightful, but the topic of it is very fascinating and, with some stretch of imagination beyond our current technological capabilities, even important. Basically, some astronomy eggheads decided to carry out a relatively simple exercise. Assume that with conditions in other solar systems similar to those found in ours, the distance from the sun and the nature of orbit determine the temperature conditions to be found on planets. Thus, any planet with its orbit falling within the specific range of distance from the sun (star) will be potentially inhabitable. Now, take visible stars and start linking star intensity (energy it emits) to distance to orbiting plants. Count the ones that are close enough not to be ice cubes floating in space and yet far enough not to be like a roasting oven… Simple and rather boring. But also rather significant. It turns out that the closest candidate to Earth we can find is a planet mere 12 light years away from us. (That is just shy of 113,528,765,670,970 kilometers or, like, 272,120,723,085 round trips between Dublin and Cork without stop-overs in McDonalds, that's right over 272 trillion round trips)... some might, one day, call that commuting distance to Dublin...
http://www.popsci.com/article/science/one-five-sun-stars-have-earth-planets?src=SOC&dom=tw
Here is the same story in much cooler and excited language of science:
http://www.pnas.org/content/early/2013/10/31/1319909110.full.pdf 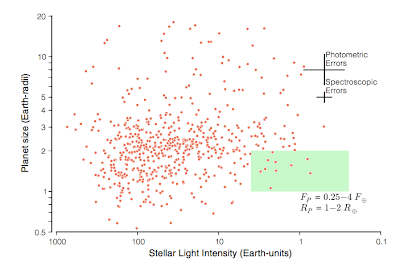 Fig. 4. The detected planets (dots) in a 2D domain similar to Figs. 1 and 2. Here, the 2D domain has orbital period replaced by stellar light intensity, incident ﬂux, hitting the planet. The highlighted region shows the 10 Earth-size planets that receive an incident stellar ﬂux comparable to the Earth: ﬂux =0.25–4.0 times the ﬂux received by the Earth from the Sun. Our uncertainties on stellar ﬂux and planet radii are indicated at the top right.

To explain the above: green box contains Earth-like planets. Or in the terminology of the article: 10 small ðRP=1−2 R⊕Þ planets that receive stellar ﬂux comparable to Earth: FP=0:25−4 F⊕.


Back on Earth, meanwhile, the largely uninhabited and uninhabitable planet Detroit got a fresh start on (some) life in the form of an absolutely fantastic new firm that specialises in reviving what used to be an industrial design powerhouse. Shinola is a superb group of designers and producers that do everything - from fantastic watches to unbelievably well-designed and executed bikes… Enjoy!
https://www.facebook.com/shinola
An awesome brand from an awesome city... The first set of non-Swiss watches I actually would love to own… 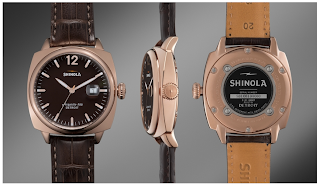 From life-restoring design success story of Detroit's wastelands to the story of human's life-destroying activities in the oceans:
http://www.foreignaffairs.com/articles/140164/alan-b-sielen/the-devolution-of-the-seas?cid=soc-facebook-in-snapshots-the_devolution_of_the_seas-110913
Foreign Affairs once again delivers a superb article on a hugely important topic.


And from digging ourselves into the environmental trouble, to digging out a troubled history… Brief history of world's largest hand-made hole:
http://www.atlasobscura.com/places/big-hole-and-open-mine-museum 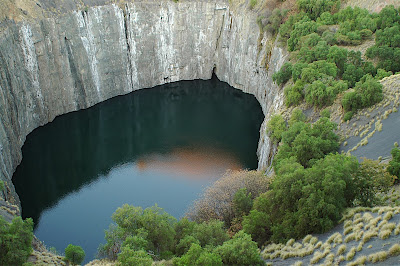 Attached to it, is the story of the De Beers...

Enough for the day that's left...
Posted by TrueEconomics at 4:44 PM