This is an unedited version of my Sunday Times article from November 3, 2013.


In the marble and mahogany halls of European high finance HQs, the next few months will be filled with the suspense of the preparation for the banks audits.

Much of this excitement will be focused on matters distant to the real economy. Truth is, saddled with zombie banks, and public and private sectors’ debt overhangs, euro area is incapable of generating the growth momentum sufficient to wrestle itself free from the structural crisis it faced since 2008. The latest ECB forecasts for the Euro area economy, released this week, predicted real GDP contraction of 0.4 percent for 2013 and growth of 1 percent in 2014. With these numbers, the end game is the same today as it was two years ago, when previous stress tests were carried out. The system can only be repaired when banks absorb huge losses on unsustainable loans.

New stress tests are unlikely change this. However, the tests are important within the context of the weaker banking systems, such as the Irish one. The reason for this is that the ECB needs to contain the sector risks as it goes about building the European Banking Union, or EBU.

The good news is – there are low- and high-cost options for achieving this containment in Ireland’s case. The bad news is – neither involves any relief on the legacy banks debts necessary to aid our stalled economy. The worse news is – the Government appears to be pushing for exiting the bailout without securing the low cost option, leaving us exposed to the risk of being saddled with the costlier one.


The IMF data suggests that Euro area-wide banks’ losses can be as high as EUR350-400 billion - or just under one third of the total deleveraging that still has to take place in the banks. The ECB needs to have an accurate picture of how much of the above can arise in the countries where banks and Government finances are already strained beyond their ability to cover such losses. The ECB also needs to deliver such estimates without raising public alarms as to the levels of losses still forthcoming.

Taken together, the above two points strongly suggest that in the case of Ireland, the banks will come out of the stress tests with a relatively clean bill of health shaded somewhat by risk-related warnings. Pointing to the latter, the ECB will implicitly or explicitly ask the Irish Government to secure funding sources for dealing with any realization of such risks. Such precautionary funding can only come from either a stand-by credit line with the IMF and/or European stabilization funds, or a commitment to set aside some of the NTMA cash. An NTMA set-aside will cost us the price of issuing new Government debt. This is potentially more than ten times the price of IMF credit line.

In short, Ireland should be using ECB’s concerns over our banking system health to secure a cheaper precautionary line of credit. Judging by this week’s comments from the Government, we are not. One way or the other, it is hard to see how continued uncertainty build up within Irish banks can help our cause in obtaining both a precautionary line of credit and a relief on legacy banks debts.


The ECB concerns about Irish banks are not purely academic. Our banking crisis is far from over.

Consider the latest data on three Pillar Banks: AIB, Bank of Ireland and Permanent tsb, covering the period through H1 2013 courtesy of the IMF and the EU Commission reviews published over recent weeks. On the surface, the three banks are relatively well capitalised with Core Tier 1 capital ratio of 14.1 percent, down on 16.3 percent a year ago. Meanwhile, the deleveraging of the system is proceeding at a reasonable pace, with total average assets declining EUR30.5 billion year on year.

The problem is that little of this deleveraging is down to writedowns of bad loans. This means that high levels of capital on banks balance sheets are primarily due to the extend-and-pretend approach to dealing with nonperforming loans adopted by the banks to-date. All members of the Troika have repeatedly pointed out that Irish banks continue to avoid putting forward long-term sustainable solutions to mortgages arrears and that this approach can eventually lead to amplification of risks over time.

Loans loss provisions are up 11 percent to EUR28.2 billion and non-performing loans are up to EUR56.8 billion. Still, while in H1 2012 non-performing loans accounted for 22.2 percent of all loans held by the banks, at the end of June this year, the figure was 26.6 percent. Non-performing loans are now 35.5 percent in excess of banks’ equity, up from just 4.7 percent a year ago. As a reminder, Irish Exchequer holds 99.8 percent stake in AIB, 99.2 percent share in Ptsb and 15.1 percent stake in Bank of Ireland. This means that should capital buffers fall to regulatory-set limits, further writedowns of loans will mean nullifying the Exchequer stakes in the banks and crystalising full losses carried by the taxpayers.

Continued weaknesses in the solvency positions of the banks are driven primarily by three factors. Firstly, as banks sell or collateralise their better loans their future returns on assets are diminished. The second factor is poor operational performance of the banks. Net losses in the system fell between H1 2012 and H1 2013. However, this still leaves banks reliant on capital drawdowns to fund their non-performing assets. The third factor is the weak performance of banks’ non-core financial assets. Over the last 12 months, Irish banks holdings of securities grew in value at a rate that was about 12-15 times slower than the growth rate in valuations of assets in the international financial markets.

In short, the IMF review presented the picture of the banking sector here that retains all the signs of remaining comatose. This was further confirmed by the EU Commission report this week, and spells trouble for the Irish banks stress tests.

In 2011 recapitalisation of Irish banks, the Central Bank assumed that banks operating profits will total EUR3.9 billion over the 2011-2013. So far the banks are some EUR4.5 billion shy of matching the Central Bank’s rosy projection.

This shortfall comes despite dramatic hikes in interest margins on existent and new loans, decreases in deposit rates, and reductions in operating costs. Compared to H1 2011 when the PCARs were completed, lending rates margins over the ECB base rate have shot up by up to 138 basis points for households and 59 basis points for non-financial companies. Rates paid out on termed deposit have fallen some 103 basis points. As the result, banks net interest margins rose.

On top of that, the funding side of the banks remains problematic. The NTMA is now holding almost half of its cash in the Pillar Banks, superficially boosting their deposits. Private sector deposits continue to trend flat and are declining in some categories. This is before the adverse impacts of Budget 2014 measures, including the Banks levy and higher DIRT rates start to bite.

Behind these balance sheet considerations, the economy and the Government are continuing to put strains on households' ability to repay their loans. This week, AA published analysis of the cost of mortgages carry (the annual cost of financing average family home and associated expenses). According to the report, the direct cost of maintaining an average Irish home purchased prior to the crisis is now running at around EUR 21,940 per annum. Under Budget 2014 provisions, a married couple with two children and combined income of EUR 100,000 will spend one third of their after-tax earnings on funding an average house. In such a setting, any major financial shock, such as birth of another child, loss of employment, extended illness etc., can send the average Celtic Tiger household into arrears.


All of this, means that any honest capital adequacy assessment of the Irish banking system will be an exercise in measuring a litany of risks and uncertainties that define our banks’ operating conditions today and into the foreseeable future. Disclosing such weaknesses in the system will risk exposing Irish banks to renewed markets pressures, including possible failures to roll over maturing debts coming due. It can also impair their ability to continue deleveraging, and fund assets writedowns. On the other hand, leaving these stresses undisclosed risks delaying recognition of losses and exposing us to pressure from the ECB down the line.

Not surprisingly, as the ECB goes into stress tests exercise, it is exerting pressure on Ireland to arrange a stand-alone precautionary line of credit. While it is being presented as a prudential exercise in light of our exit from the bailout, in reality the credit will be there to cushion against any potential losses in the banking system over 2014-2018, before the actual EBU comes into force. Should such losses materialise, the Exchequer will be faced with an unpalatable choice: hit depositors with a bail-in or pony up some more cash for the banks. Having a stand by loans facility arranged prior to exiting the Bailout will help avoid the latter and possibly the former. The cost, however, will be an increase in overall interest charges paid by the State, plus continued strict oversight of our fiscal position by the Troika.

A rock of interest charges and Troika supervision, a hard place of zombiefied banking, and a rising tide of risks are still beckoning Ireland from the other side of the stress tests. 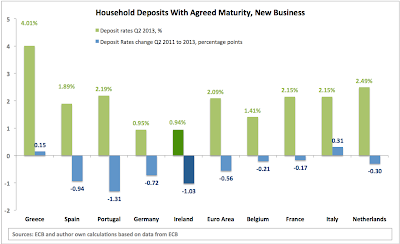 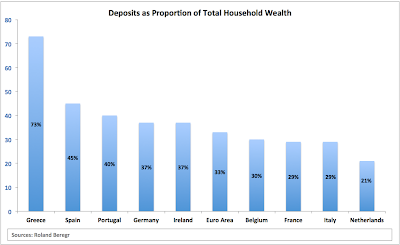 The latest data from the retail sector released by the CSO this week painted a rather mixed picture of the domestic economy’s fortunes. Controlling for some volatility in the monthly series, Q3 2013 data shows that despite very favourable weather conditions over the July-September 2013, Irish core retail sales (excluding motors sales) fell in volume by some 0.3 percent compared to Q3 2012. On the other hand, there was a 0.6 percent increase in the value of sales over the same period. Currently, the volume of total core retail sales in Ireland sits 4.3 percent below 2005 levels. Non-food sales, excluding motor trades, fuel and bars sales, fell 2.1 percent on 2012 in volume and is up 1.2 percent in value. The inflation effects imply that when it comes to core non-food sales, the volumes of retail trade are now down 22 percent on 2005 levels, while the value of sales is up almost 2 percent. Consumers are still on strike, while retailers are getting only a slight prices relief in the unrelenting crisis.

Posted by TrueEconomics at 5:57 PM