This is an unedited version of my column in the Village Magazine, August-September 2013


With early Budget looming on the horizon, the circus of the 'austerity is overdone' politics has rolled into town. The Labour and the FG backbenchers are out in force trying desperately to salvage the little popular support they still might command in the streets. Not to be outdone, Fiana Fail, freshly converted into the Church of Socialistas has been unleashing torrents of newly-discovered social consciousness. Things are getting so hot on the anti-austerian' speaking circuit that Siptu was able to get even Jack O'Connor a gig. Their star performer was last seen thundering at the MacGill Summer School a potent brew of outlandishly misinformed comparatives between the European and the American policies for dealing with the Great Recession and calls on the imaginary Government to… no prizes for guessing… end 'human rights-violating' austerity.

Problem is, once you come back from all of the highs of this Keynesian Lollapalooza, Irish Government continues to run an insolvent state with spending not matched to revenues and with the expenditure programmes outcomes not matched to the needs of the society at large. Delivering neither fiscal sustainability, nor growth, nor value for money, our fiscal house is grossly out of shape five years into various reforms. Worse, the fiscal mess we are in has nothing to do with the lack of economic growth and everything to do with the policy institutions that the current Government inherited from the decades of political clientelism presided over by its predecessors.


Let us look at some numbers.

In the first six months of 2013, Irish State has managed to spend EUR27.12 billion on current expenditure, just EUR352 million shy of the level of spending in the same period of 2012 and EUR3.2 billion more than we spent in the six months through June 2011. Meanwhile, tax revenues rose from EUR15.3 billion in January-June 2011 to EUR17.6 billion this year. Crunchy austerity based on savage cuts, five years in still looks more like a tax squeeze and spending re-allocation from one programme to another.

Meanwhile, Department of Health spending is now running at EUR6,539 million for H1 2013, down on EUR6,754 million in H1 2011 - a whooping reduction of EUR215 million. Do keep in mind that 2011-2012 increases in the cost of beds charged to the private insurers (aka to ordinary insurance purchasers) have more than offset the above reductions in spending. Net current (ex-capital) spending on health has shrunk by just EUR128 million over the last two years.

The Department of Health is a great example to consider when dealing with the failure of our reforms. It is a frontline service by definition - the one we all are willing to pay for. Yet, it is also a symbolic dividing line between the poor (allegedly having no access to the services) and the rich (allegedly all those who hold health insurance and as 'private' patients overpopulate public wards preventing the poor from getting necessary hospital beds). Healthcare was also an epicenter of rounds of reforms over decades, including the decades of rapid economic growth and prosperity. And it is one of the two largest departments by voted spending, with budget only slightly behind the EUR6.545 billion spend in H1 2013 at the Department of Social Protection.

For this spending we - the middle classes and other payers - get little value for money in services. Over 35% of Irish households have to purchase private insurance to access any meaningful level of health services. In case you still rest in the camp of those who believes that such purchases of insurance are purely voluntary and constitute luxury, Irish Government is considering making health insurance purchasing purely obligatory.

Even with this expenditure, access to basic, quality of life-improving procedures and healthcare maintenance is shambolic. While run of the mill emergencies are getting reasonably decent attention, complex and time-sensitive treatments are wanting. Thus, Ireland ranks at or below the European averages in treatment of majority of chronic and long-term diseases, before we control for differences in population demographics. Our primary care and access to specialist consultants is pathetic outside the emergency rooms and hospitals' ICUs. Despite seeing the fastest rise in the healthcare expenditure per capita over 1997-2007 period in the entire EU27, per EU assessment, Irish healthcare expenditure increases have made only "a modest contribution to [improved mortality], substantially less than one third of the total, and possibly only a few percentage points".

In reality, of course, Irish healthcare is run for the benefit of Irish healthcare staff. In 2005-2007 pay and salary bill for HSE stood at an average 50.7% of the entire HSE non-capital budget. In 2009 it was 50.1%. In 2010, Irish salaries (excluding other income) for medical specialists were the highest in the EU, with the second highest paid cohort of physicians (in the Netherlands) coming at an average salary discount of roughly 25% relative to their Irish counterparts. These salaries were not inclusive of the Irish doctors earnings from private patients.

This is hardly surprising. Between December 2005 and mid-2012, Irish consumer price inflation (CPI) on cumulative basis has hit 9.5%. Health CPI over the same period totalled 21.4% - more than double the rate of overall inflation. Of EU15 states, Ireland and Holland were the only states where health costs were rising faster than general inflation in the last 7 years. 2005-2011 inflation run at 47.3% in Hospital services (state-controlled charges), followed by dental services 28.6%, Out-patient services 23.5% and Doctors' fees at 21.3%. This inflation took place from the already high cost base present in Ireland at the end of 2005.

By international comparisons, from 2005 through mid-2012 Ireland had the lowest rate of inflation in the EU15, while our health services inflation was the second highest after the Netherlands.

Austerity, it seems, has been a boom-time for healthcare costs. Or put differently, while the rest of the world defines efficiency-improving reforms as changes in delivery of services that reduces the cost of services given fixed or improving quality of delivery, in Ireland we define efficiency gains as providing fewer services at a higher cost.

Despite this, in Irish media and policy circles, assessment of healthcare systems performance starts and ends with the comparatives on public spending levels. Good example of such assessment was the 2010 report to the Oireachtast, titled "Benchmarking Ireland’s Health System". A foreigner reading this report can easily conclude that (a) Irish healthcare is run on a shoestring, (b) achieves great outcomes in terms of reduced rates of prevalence of and mortality from key diseases, and (c.) is delivered to the middle class and the rich, bypassing the poor.

In reality, of course, the inequality of access to Irish healthcare system means that the middle and upper-middle classes are required to buy expensive insurance to gain access to health services. Our achievements in combatting key diseases are primarily driven by our younger (and thus healthier) demographics.

And when it comes to access, only 17.2% of all non-maternity related hospitals admissions in 2011 (the latest for which we have data) were for private patients, with the balance going to public patients. On average, people on private insurance had 2.4-2.6 visits to GP in 2007-2010, while those on medical cards had 5.3-5.2. In 2012, the rich-favouring distribution of access to Irish healthcare so often decried by the media and politicians meant that 39% of population or just under 1.8 million people had access to medical cards, more than the number of private health insurance holders.

Health spending represents the case where we have at least some indications and metrics concerning the inefficiency of services provision. In contrast, in other major areas of state expenditure, there is no basis for efficiency assessments and none are being developed.

Irish welfare system is absurdly complicated, and unbalanced - providing potentially excessive services for able-bodied adults on long-term dependency and insufficient services for adults in temporary need of supports and to people with severe disabilities. Related services - in particular in the areas of skills development and training, placement supports for the unemployed - are glaringly out of touch with reality of the labour market demands. Over the last five years, Irish economy produced ever-increasing shortages of skills in several areas, most notably internationally-traded ICT services, financial services, and back- and front- office support services. Yet Irish system of unemployment supports, planned by Forfas and managed by Fas/Solace, failed to reflect these long-term trends. By the time state training behemoths turn around to face the music, the demands for skills will change again.


Irish state spending - with or without austerity - is a rich sprinkling of waste over a thin layer of substance. And it remains such in the face of five years of boisterous pro-reform rhetoric.
Irish austerity has failed, so much we can all agree on. But the real failure is not in cutting spending too much, but in failing to deliver any real gains in efficiency of public services provision or quality of these services. And it failed in containing the costs of the State, especially if we are to use long term sustainability as the benchmark for assessing the reforms.

The likes of Jack O'Connor and Fiana Fail ‘Nua’ might have discovered a magic trick for conjuring economic growth out of public spending, but reality is that the actual working population is by now sick and tired of being taxed to fund the perpetuation of the public sector mess, best exemplified by our healthcare. 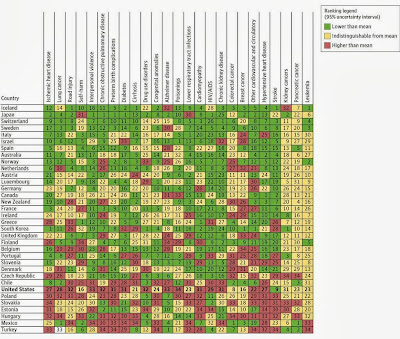 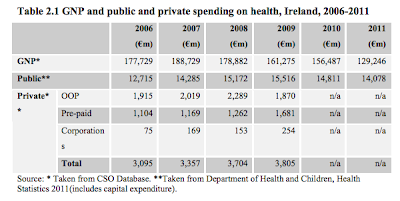 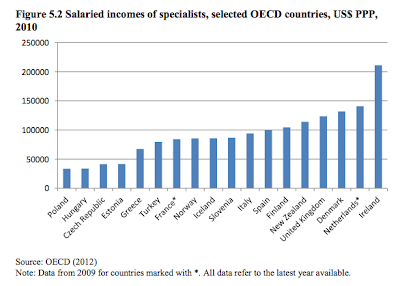 Posted by TrueEconomics at 8:07 PM

This article is spot on. I work in the HSE and there has been no reform whatsoever since the crisis began. In my part of the organisation we are working to ensure we spend every cent of our annual budget as quickly as possible before year end - it doesn't matter what the project is.

As a parent with a child needing repeated grommets insertions we had to use our private health insurance in recent years and pay €2k directly to the private hospital on another occasion) to get our child seen to as quickly as possible. The alternative was to go on a public waiting list for at least a year. Poor hearing is a terrible drawback for a young child in school and can hold him up developmentally.

Well said. Read this all those who are wondering about the reasons behind the emigration study released by UCC today.
Sad thing is, nothing will change. But huge kudos for highlighting this anyway.