A quick post. Recent research note from one of the highly regarded property research outfits in Ireland cited the following sources of Ireland's success in attracting nine out of ten largest tech companies to Dublin: "low corporation tax rates and a burgeoning workforce which is young, educated and English speaking." This references not some abstract period of, say, 'since 1990' or even 'since 2000', but the last few years, as the argument is then carried over as a reason / a causal explanation for the reported boom in prime office rents in Dublin in H1 2013.

While I do not want to pick any fights over anything, least of all the 'young' bit (read my Sunday Times column from today on 'demographic dividend') or 'educated' part (see my view of our education system and skills/human capital on this blog) or 'English speaking' (slightly ironic, given tech employers are complaining about the lack of foreign languages skills availability in Dublin), I wonder what this 'burgeoning workforce' references.

Here is data from CSO on Dublin's workforce for Q2 (or H1) in every year on record: 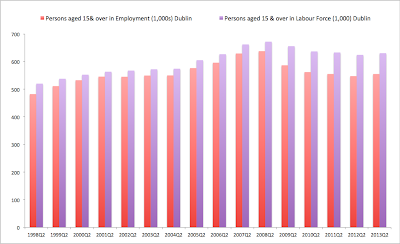 Now, in terms of labour force numbers, in Q2 2013 there were 630,500 in labour force in Dublin. This marked an increase of only 6,200 on Q2 2012 and marked the second lowest level reading since Q2 2006. With all the positive demographics and the tech sector boom cited by the property researchers, the burgeoning we might have experienced in labour force levels terms was consistent with the hitting a 7-year slump. Slightly more 'burgeoning' than employment figures, but still not exactly exciting enough to stir any tech companies rushing into Dublin.

Note: I reference two numbers in relation to the 'workforce' term: labour force and employment. The latter measures those who currently work, the former includes the latter, plus the unemployed, excluding  those in education and training. I seriously doubt US tech giants are coming here for the pool of the unemployed. Which means that the 'workforce' that can be expected to be strongly positively correlated with incentives for the MNCs to locate here would be measured by employment figures, not by general labour force ones.
Posted by TrueEconomics at 11:22 PM