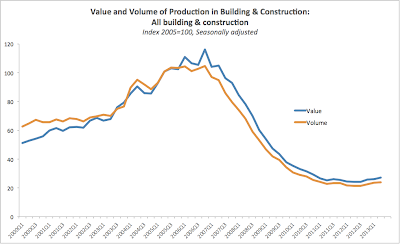 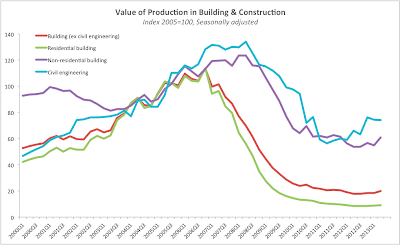 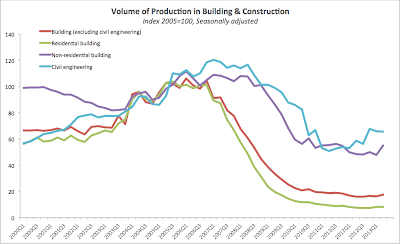 Posted by TrueEconomics at 10:45 PM

Re: Value and Volume Chart

Contrary to 'popular' perception, . . . I would suggest that construction was 'in trouble' for a number of reasons going back to 2007, when the lines on the chart began to 'correct' themselves for the first time. And heaven knows, there was a lot of correction that needed to get done.

But to choose one in particular, it is sometimes referred to by economists like John Fitzgerald at ESRI. Namely, how Irish construction 'stole' a workforce by overpayment from manufacturing over the course of the 2000s.

The popular perception, or narrative, suggests that 2008 and the banking and fiscal crisis also was the 'starting gun' as it were, for the downturn in construction, . . . but even if we hadn't had a banking collapse, a credit crunch or a fiscal austerity program, there would still have been a massive correction in construction output for Ireland. Literally, because we had built ourselves out of new projects and new ideas, and things to do in that area.

The 'build it and they will come' philosophy had run its course by then.

Because there were new developments everywhere and people stopped coming a good year or two prior to the wider economic collapse of 2008. So this is something that we ought to be very aware of in construction I think, and your chart on 'value and volume' shows that picture nicely.

The result of the same, is mistakes are made, things get missed, the industry is working at 'over capacity', . . . and the cost of cleaning up that mess afterwards, is horrendously expensive. Because the 'customer' signs into contracts, and those contracts have loans attached to them, and long term commitments of all kinds, that will take years and years to iron out.

The last comment that I will make on the 'value and volume' chart, is to draw analogy with the automobile advertisement, 'safe driving' rule, of 'less than two seconds', to judge breaking distances in dry/wet roads.

What we witness in Ireland in 2000-06, is driving on a wet road, . . . and one can also see from that same chart, that the 'two second' rule for breaking becomes more like four to six seconds at least. Which is too late, and the destruction of livelihoods, skills base and businesses depending on construction is total and absolutely merciless.

Re: Value and Volume

Worth adding perhaps. It is the aspect that those outside of construction would not even know about. It is the massive investment, into creating an industry, creating the human resources capacity, the procedures, the systems and the availability of services in the construction sector that was made by Ireland as a nation between 2000 and 2006.

I mean, people who are outside of the construction industry, would not understand that. It all happened in the background quietly, where businesses were formed, mergers created, investments made by many into building up capacity and enhancing the quality of service provided by Irish construction. It was a huge undertaking for one small country - something similar to Maynard Keynes going to America in the 40's and working with them to re-organize the entire economy to place it on a war time footing for outputs and labour.

The result of this in Ireland, between 2000 and 2006 is demonstrated graph of 'value and volume'. We can see that we doubled value and volume in six years, from what was already a reasonably high output in year 2000. But look at what happens then. All of that investment and re-organisation gets washed down the river.

In the space of the next six years, starting from 2007, the output of the industry halved in size, and IT DID NOT STOP THERE either, . . . because it went crashing through that floor and ended up halving all over again, . . . so that by the time the second six year period 2007-13 is up, we have seen a single order decrease in output from 2000, and a whopping two order decrease in output from 2006.

Hi
Pretty good post. I just stumbled upon your blog and wanted to say that I have really enjoyed reading your blog post.