Per summary: "This month’s North America and Western Europe Economic Cycle Survey presented a positive outlook on global growth, with a net of 71% of 119 economists expecting the global economy will get stronger over the next year. (1% higher than within the August report).

At the 12 month horizon, the positive theme continued with the consensus expecting all economies spanned by the survey to strengthen or remain the same.

The consensus outlook for the Eurozone continued to improve, where the 6 month forward outlook shifted from 75% to 86% expecting the currency-bloc to move to an expansionary phase. The picture within the bloc was not uniform however, with most respondents expecting Portugal, Greece, Belgium and the Netherlands to remain in a recessionary phase over the next 2 quarters.

With regards to the US, the consensus view firmly that North America as a whole is in mid-cycle expansion and remaining so through H2 2013."

September improvement for the global outlook was much shallower than a 10 point jump in August. Ditto for Eurozone outlook: this rose from 57% in July to 75% in August to 87% in September. Italy outlook seemed to have improved quite markedly, however.

Note: these views reflect opinions of survey respondents, not that of the BlackRock Investment Institute. Also note: cover of countries is relatively uneven, with some countries being assessed by a relatively small number of experts. 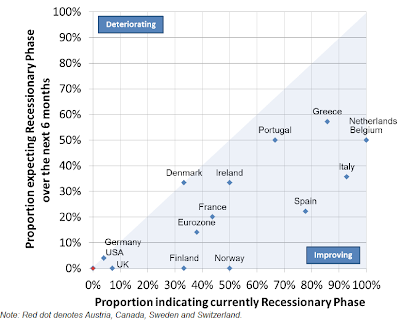 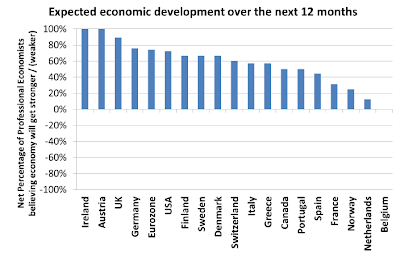 Ireland continues to lead expectations, just as it did in previous 3 months.

In global expectations there were some notable movements in analysts' replies. 6% of analysts expected global economy to get a lot stronger over the next 12 months back in August, and this declined to 2% in the current survey. 69% expected it to get a little stronger in August and this proportion rose to 76% in September. 5% expected the global economy to get a little weaker in the next 12 months back in August, which in September rose to 6%.