A very important paper by Sacks, Daniel W. and Stevenson, Betsey and Wolfers, Justin, The New Stylized Facts About Income and Subjective Well-Being (January 23, 2013, CESifo Working Paper Series No. 4067. http://ssrn.com/abstract=2205621). Note: emphasis in bold is mine

On foot of decades-long research that "asks people how happy or satisfied they are with their lives", "much of the early research concluded that the role of income in determining well-being was limited, and that only income relative to others was related to well-being".

"In this paper, [the authors] review the evidence to assess the importance of absolute and relative income in determining well-being. Our research suggests that"
1) absolute income plays a major role in determining well-being and
2) national comparisons offer little evidence to support theories of relative income and
3) the data show no evidence for a satiation point above which income and well-being are no longer related.

Crucial finding is that recent data rejects the so-called Easterlin Paradox: "Easterlin (1974), …asked “Does economic growth improve the human lot?” He answered: it does not. He began by showing that, relative to poor people, rich people within a country report greater well-being, as measured by self-reported happiness, life satisfaction, and related concepts. No-one disputes this observation… His argument was straightforward. If only absolute income matters, then when everyone gets richer, everyone’s well-being should rise. But if only relative income matters, then when everyone gets richer, no one’s well-being should rise, since no one gets richer relative to the average."

Here is the striking conclusion of the authors: "But is Easterlin correct? The accumulation of data over recent decades shows that Easterlin’s Paradox was based on empirical claims which are simply false. In fact rich countries enjoy substantially higher subjective well-being than poor countries, and as countries get richer, their citizens experience ever more well-being. What’s more, the quantitative relationship between income and well-being is about the same, whether we look across people, across countries, or at a single country as it grows richer. This fact turns Easterlin’s argument on its head: if the difference in well-being between rich and poor countries is about the same as the difference in well-being between rich and poor people, then it must be that absolute income is the dominant factor determining well-being."

Basic illustration of the above across countries: 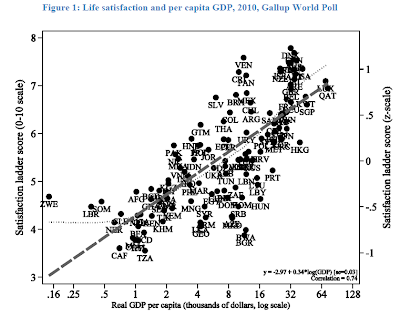 Basic illustration across and within countries: 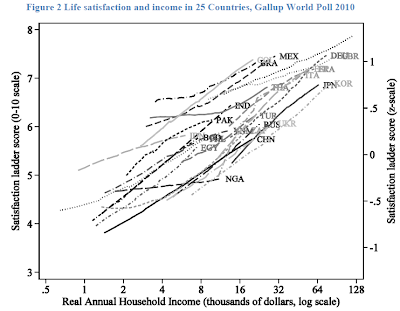 This is a paper that challenges the fundamentals of our understanding of the relationship between income, happiness, income inequality and absolute v relative poverty.


Note: I wrote about the related paper here: http://trueeconomics.blogspot.ie/2013/05/452013-higher-income-vs-higher.html

Posted by TrueEconomics at 8:32 PM