27/9/2013: Consolidating Irish Banking Sector is a Bit of a Efficiency Dodo?

A new paper by Anolli, Mario, Beccalli, Elena and Borello, Giuliana, titled "Are European Banks Too Big? Evidence on Economies of Scale" (August 6, 2013: http://ssrn.com/abstract=2306771) "…investigates the level of economies of scale, as well as their determinants, for 103 European listed banks over the period 2000-2011…"

H/T to @brianmlucey for spotting the paper. Brian blogged on this today here: http://www.irishbusinessblog.com/2013/09/26/are-irish-banks-too-big-seems-so/

The economies of scale concept as applied here is whether banks become more cost efficient when their size increases. In other words, the issue is are TBTF banks more efficient and are smaller banks, perhaps created by a regulatory breaking up of larger institutions in the wake of the crisis less efficient?

According to the authors, in the wake of the crisis: "An intense debate on the “make-them-smaller” is ongoing, and we aim to contribute from a quantitative perspective."

To do so, and "to fill the gap of evidence on European banks over the most recent years, this paper aims to investigate whether, among EU listed banks, there is evidence of economies of scale also for the largest banks in terms of total asset. Moreover it aims to isolate the effects of risk-taking, diversification in the business model and profitability on economies of scale."

Put differently, in countries like Ireland, the study finds that there is small or negative effect of larger size on greater efficiency of the banking system. Now, wait, but what about Government/Central Bank plans for consolidating the banking system into 3-pillar banks? Ooops...

"As for the effects of risk-taking, diversification in the business model and profitability on economies of scale, higher economies of scale are documented for banks more oriented towards investment banking (in all periods), banks with a higher liquidity but only up to a liquidity ratio of about 5.3 percent (convex curve during the crisis only), banks with a smaller amount of Tier 1 capital (concave, although almost flat, curve during the crisis only), and banks contributing less to systemic risk. The Granger causality tests suggest the existence of unidirectional causality for liquidity, Tier 1 and systemic risk."

So in plain English, this means that authors found that larger banks are more efficient when they are more liquid, take on more risky assets (investment banking), hold less capital (i.e. run greater risk of potential need for larger bailouts) and for banks that are less wired into the economy (contribute lower systemic risks). Oh, and the casualty for the economies of scale efficiencies goes from riskier behaviour and less connection to the economy to greater efficiency related to scale. Which part of these conclusions supports the irish Government/CB plans for 3-pillar banking system? Err… none!

Now onto country-level results: "Table 4 reports the average economies of scale for each country and for the different size classes of banks during the entire period 2000-2011." 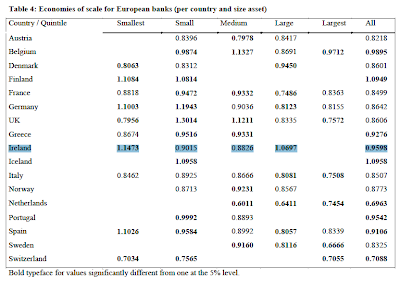 Oh, wait, so the 3 Pillars are getting worse (at being efficient) as they get bigger? You betcha… And the solution is… per Irish Government plans... to grow them even more mighty by consolidating the entire banking space in their hands. But more to come on these giants of greatness in the next table.

"Table 5 shows the average values of economies of scale for each country and in each year under analysis." 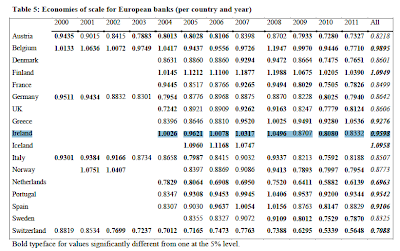 Wait a second, folks… between 2010 and 2011 Irish 'banks have: (a) shed much of their bad assets into Nama; (b) got recapitalised, and (c.) spent the last few years trimming down their operations to deliver on efficiencies demanded from them by the Central Bank… And yet - the economies of scale declined for them between 2010 and 2011.

Crazy stuff, until you realise that none of the 'reforms' we put forward to our banks have anything to do with increasing their efficiency or their capacity to function like proper banks. All our 'reforms' have been designed to suppress the explosion of bad risks on their balanceshets. Extend-and-pretend across the banking system doesn't add up to gains in efficiencies in the banking system? Who could have thought that up to be the case?

Now, how about a novel approach to repairing Irish banking system? How about getting real competition going by encouraging new entrants and freeing up (regulatory) credit unions and post offices to move into banking and consolidate within their sub-sector to form medium-sized banks? That might reduce market concentration and increase the numbers of banks with economies of scale?..
Posted by TrueEconomics at 10:10 PM

Given the push for consolidation in the Credit Union sector by the Govt through the establishment of ReBo surley this papers puts that move into question. It was assumed by those who contributed to the Commissions report last year in relation to the Credit Unions that efficiency gains were a given under a wave of mergers and consolidations - was that an assumption too far?

Not exactly. Some consolidation in Credit Unions space will probably be efficiency enhancing. The question is how far should it extend. I would say we need 2-3 alternative banks the size of one AIB combined to start challenging the entire system to greater competition.