Irish Fiscal Council paper "The Government’s Balance Sheet after the Crisis: A Comprehensive Perspective" authored by Sebastian Barnes and Diarmaid Smyth is an interesting read.

The paper sets out a strong promise: "While discussion often focuses around the debt-to-GDP ratio as referenced by the EU Stability and Growth Pact, the reality is far more complex. This paper takes a comprehensive look at the Government’s balance sheet following the financial crisis. This involves assessing assets and liabilities of the General Government sector, off-balance sheet contingent and implicit liabilities as well as the wider public sector."

Alas, the side of the assets equation is a bit wanting...

While it is good to see the broader approach taken by the authors to the problem of fiscal sustainability of public finances in Ireland, too often, broadening of the coverage of the crisis-impacted sovereign balance sheet slips into the stream of extolling the riches of state-owned assets, whitewashing the liabilities using imaginary assets. The paper does not do this. Which is good. However, the paper is still creating loads of confusion because it provides no clear tabulation of the assets and the way they are accounted for in the analysis.

Instead of a concise tabulation, assets analysis is presented in two parts, both overlapping. This makes it nearly impossible to disentangle what the authors include where and to what specific value.

Let's start from the top:

Per authors: "General Government financial liabilities have increased four-fold since 2007, reaching €208 billion (127 per cent of GDP) in 2012. Over this period, Ireland experienced the largest increase in the debt-to-GDP ratio of any Euro Area country." Yep. Nothing controversial here.

"The Government has substantial holdings of financial assets. These increased modestly over the same period to reach €73 billion (45 per cent of GDP) in 2012. The main assets are cash balances, holdings of semi-state entities and investments in the banking sector."

Now, that's a bit of a statement, in my opinion, open to questions.

Firstly, it creates an impression that most of the assets Government has are liquid. Not so, in my view.

Secondly, it creates an impression that the Government has a functional power to seize these assets. Also a bit of stretch in my view.

Thirdly, is suggests that even if individually liquid and recoverable, these assets can be sold in the market or used as collateral in the case of distress. Again, not something I would agree with.

The authors conclude that "The Government’s net financial assets (NFA), subtracting financial liabilities from financial  assets, gives a broader measure of the financial position of government. NFA have  declined from a position of balance in 2007 to a net liability of €135 billion (82 per cent of GDP) in 2012. Using this broader measure, the Irish government was the third most indebted country in the Euro Area in 2012 (as a share of GDP)."

I am not so sure that EUR73 billion is the real number we should be using in computing Government net financial position. My gut feeling is that we are lucky if we can count EUR50 billion in somewhat liquid and accessible funds. And even then we are at a stretch. With that, our Government's net financial assets position rises to a  deficit of 95-96% of GDP and this means that we are now challenging Greece to the Euro area's title of the second most-indebted country. And that is before Greece Bailout 3.0 which will probably result in some sort of a debt write down for the Greeks (see here:http://english.capital.gr/News.asp?id=1877516) even if small.


Here are some details on my sceptical assessment. The paper lists the following Government 'assets' (comments outside quotation marks are obviously mine):

(A.) Shares and Other Equity. "This broad asset category was valued at €24 billion. It includes: (1) the value of semi-state assets, including the equity of General Government in the Central Bank; (2) a portion of the NPRF; and (3) other equity
holdings." (1) is at least in part imaginary. The valuations of semi state companies are 'hoped for' and are not tested in the market. They also do not account fully for the shortfalls in pension funds and the knock on effects to any purchaser of equity in these companies from the role these pension funds play in running the companies' strategies. They also ignore the fact that with transfer of ownership, the semi-states are unlikely to continue enjoy state protection of their dominant market positions. All in, (1) covers EUR12 billion of semi-states equity, plus EUR2 billion of balances in the Central Bank - of which, my guesstimate is, no more than EUR5-6 billion is recoverable. The authors state clearly that "Considerable uncertainty, however,surrounds the value of these assets." per CB reserves, these are euro system money and I wonder how much of this even technically belongs to the Irish state. (2) covers NPRF-held equities and banks shares. Equities component is small, with total EUR9 billion in NPRF 'assets' accounted for mostly by banks shares (excluding preference shares). National Accounts assign EUR11 billion to the total Government holdings of banks assets. These valuations are off the mark, in my view, as the only value of the banks (ex-Bank of Ireland) today is the value of capital injected into them, net the losses they will sustain on mortgages. The rest is awash on revenue side v cost side. At any rate, these assets are not exactly liquid and if released into the market in any appreciable quantity will cause severe dilution of their value. All-in, say EUR9-10 billion of this 'stuff' is a hoped-for value in any scenario of sovereign distress.

Bit (3) above: 'Other equity holdings' "valued at approximately €3 billion. This includes the value of direct holdings of bank equity by the Exchequer, investments in the insurance sector and capital contributions to the European Stability Mechanism." Seriously? We'd get a rebate on ESM contributions? Insurance sector 'investments'? Shave off some EUR1 billion here for a dose of realism.

(C.) Amongst gloriously liquid Irish Government 'assets' the paper (and it is accepted methodology, I must say, which of course doesn't mean it makes any sense beyond purely theoretical exercise) list: "Loans and Other Assets(such as Accounts Receivable). This category was valued at €15 billion and includes a broad range of assets, namely loans from the Housing Finance Authority (HFA)(€4 billion), other Government loans,tax accrual adjustments (mainly VAT and PAYE (€3 billion) and a range of smaller assets such as collaterals, EU transfers and mobile spectrum receipts." Good luck, as one might say, selling these or pledging them as a collateral. The entire notion that all of these assets have the stated face value in the market is questionable. That they might have a stated value in an environment of distress sufficient enough to warrant their seizure is plain bonkers.

And so on… The point is that a claim that EUR73 billion represents assets that can be used to fund any shortfall in Irish Government funding or that they provide any yield that is NOT accounted for on the balance sheet already (remember, current debt is driven by deficits and these are driven by operating costs and revenues of the Government, which in turn are accounting for all asset yields that currently accrue from all of the above assets) is a bit of a stretch and double-counting.

In light of this 'net liabilities' discussion, we need to see some serious, detailed, models-based liquidity and legal title risks analysis of the assets that (a) in total amount to EUR73 billion and (b) amount to EUR45 billion that remains unaccountable in the paper in any appreciable details.


But never mind - on the net, the paper is very useful and worth a read. Here are two little gems (I will blog on rest later): 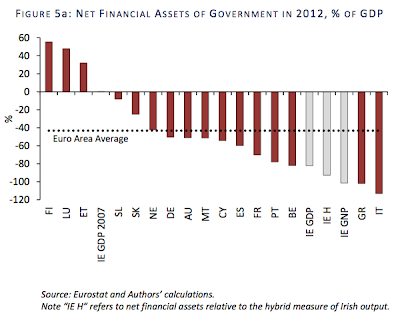 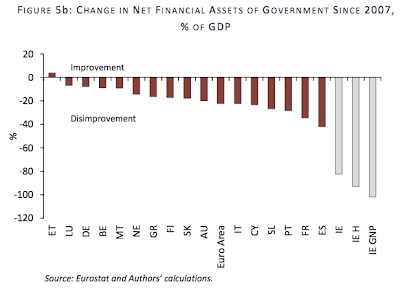 Ouch! You don't need to be a nuclear scientist to spot the problem above…

The true value of the above is that it shows clearly that even on the 'net liabilities' basis, with all the hopium injected into valuations of assets, Ireland is not that much different from Greece... Have a nice day, ya all...
Posted by TrueEconomics at 10:57 AM

Ireland is like Greece in the sense you mention, but, have you noticed, those who have been buying Irish stocks, banks and housing whilst you have remained resolutely bearish have done very nicely.. why so little comment on this?

I expect you can nitpick the statistics but just look around South Dublin, housing is up far more (as it was down far more) than reported in the broad stats we see. One can be prescient bear but at some point, it wears thin if conditions change yet you dont. Be careful.

A fair comment. I see Ireland as a polarised economy. One part paralysed by debt & ineptitude of leadership, another moving ahead. I expressed exactly this view in Sunday Times column some time ago and it is also available on this blog: http://trueeconomics.blogspot.ie/2013/08/782013-sunday-times-july-28-2013.html

Per property prices - today's news on these are covered here:
http://trueeconomics.blogspot.ie/2013/09/2692013-irish-residential-property.html

As per your suggestion - I do not trade on investment advice. That is not my job. My job is to cover data and see what it might tell us - be it good or bad.