In the previous two posts I looked at Q2 national accounts for Ireland in terms of headline GDP and GNP figures, y/y and q/q changes in the first post; and half-yearly figures analysis in the second post. The headline conclusion was that:

Now, let's take a look at the underlying components of GDP and GNP from the expenditure side of the national accounts. Since we have half-yearly data, we might as well focus on longer-term, more stable series. For this purpose, let us also look at nominal (not real) values, so we have some idea as to actual activity on the ground, reflective of price changes, as well as volumes changes. There are several reasons for doing this:


There are drawbacks to this analysis, so like everything else in economics, this is not intended to be 'completely and comprehensively' conclusive. 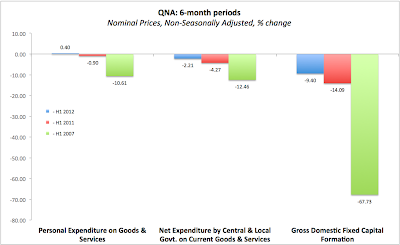 As can be seen from Chart above, Personal Expenditure on Goods and Services rose 0.4% y/y in H1 2013 - which is good news. However, the same was down on H1 2011 (recall that the Government is keen on claiming that consumer confidence and consumption spending rose during its tenure, which is obviously contradicted by the data we have). Compared to peak pre-crisis performance (peak referencing output peak, not specific series peak), we are down 10.61% on H1 2007.

Put in different terms, domestic economy is still falling, with no stabilisation in sight. 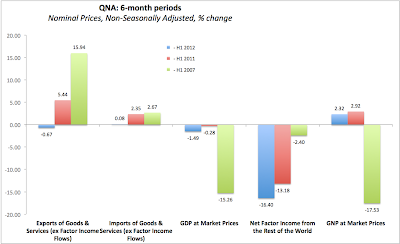 Net factor income outflows abroad are falling as well and I commented on these in the previous posts.

Chart below drills into the composition of our external trade: 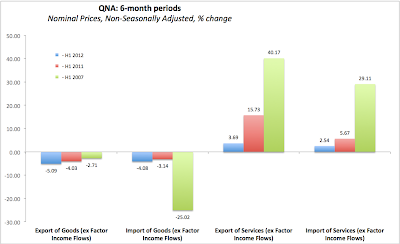 The above clearly shows the massive swing of our external trade activities from goods sectors to services sectors. And on imports of goods side it shows the legacy of the consumption bust, which remains one of the two largest drivers for improved external trade statistics we see on national accounts.

Finally, total domestic demand: the measure of the economy that covers all domestic activities of private and government consumption and investment combined, plus chafes in stocks. 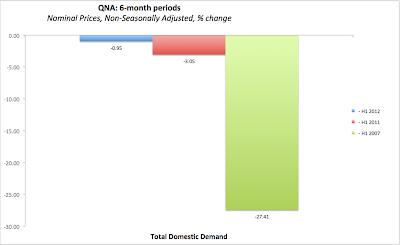 In simple terms, if Irish economy were a student asking for a report card for H1 2013, I don't think there would be much on it worth boasting about. Let's hope H2 2013 will be different for the better.
Posted by TrueEconomics at 2:23 PM