New paper on Eastern European economies from the EU Commission, titled "The EU’s neighbouring economies: managing policies in a challenging global environment" (Occasional Papers 160 | August 2013 : http://ec.europa.eu/economy_finance/publications/occasional_paper/2013/pdf/ocp160_en.pdf) provides some in-depth stats and analysis of 16 core neighbouring economies, including in the context of the Arab Spring and Russia partnerships.

Here are some interesting stats relating to Russia.

An interesting perspective on the overall Eastern European and CIS economic realm from the point of view of Russia-EU links: "High dependence on both the EU and Russia, along with still weak institutions, is a major drawback for the Eastern neighbours, particularly since the Russian economy shows a relatively high correlation with the EU economy." This suggests that Eastern 'neighbourhood' is not offering a good hedging potential for real economic activities and financial markets - both propositions that are yet to be formally tested, as far as I am aware.

The main pathways for risk transmission between Russia and EU are: financial markets and real trade.

Two tables to highlight risk transmission pathways between EU and Eastern neighbourhood and Russia in terms of trade and tourism : 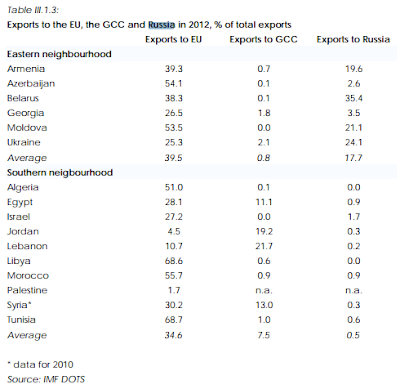 Forward conclusion: "The Eastern neighbours as a whole, but also the Maghreb
countries (which also benefit less from the buffering role of the GCC countries) seem more exposed to a prolongation or intensification of the euro area crisis, especially since under such scenario the Russian economy is likely to increase its co-movement with the EU cycle."

Another pathway for risk transmission is remittances flows. Chart below illustrates: 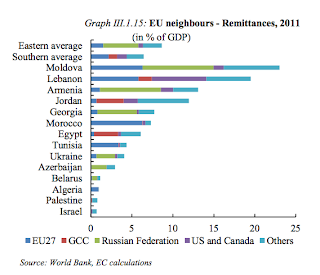 However, in recent years, remittances out of Russia have been performing well: 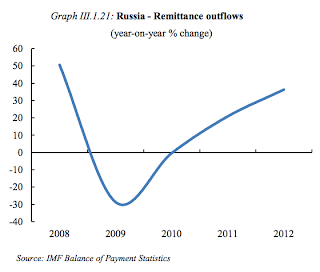 FDI inflows side: "The exposure of the Eastern neighbours to EU FDI also varies significantly across countries. In the region, Ukraine is clearly the country most exposed to changes in EU FDI. In fact, the largest FDI inflows in Ukraine in 2010 (in terms of equity capital invested, i.e. excluding reinvested earnings and intra-company loans) came from the EU (54%) and from Russia (16%). Exposure of other neighbours (e.g. Belarus) to EU FDI is more limited, notably because of the importance of other regional investors, including Russia."

Extent of output links up between Eastern neighbours and Russia is pretty severe for a number of countries: 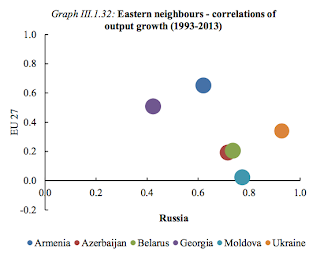 "The fact that Russia’s growth is also strongly correlated with that of the EU (the coefficient is 0.9 for the period 2000-13" compounds the problem of risks transmission. 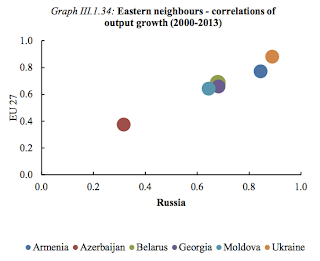 Quite an interesting set of pathways when it comes to intra-EM risks transfers.