This is an unedited version of my Sunday Times article from August 25, 2013.


Not a week goes by without a new report on the property market and construction sector digging up disparate shreds of evidence to suggest yet another turnaround in the property sector fortunes. Some of these are based on the real data, albeit often selectively interpreted; others, on desperate hodgepodge of hearsay and industry anecdotes.

Spin and marketing talk aside, the data itself can be highly unpredictable and hard to interpret. Between Q1 2010 and Q4 2011, Irish Construction sector Purchasing Manager Indices (PMIs) published by Markit and the Ulster Bank were signalling what looked like a stabilisation. CSO’s building and construction sector activity index also posted a quarter-on-quarter rise in Q3 2011. The sector promptly reverted into the red from there.

Faced with past false starts in the data and promotional advertorials in the media, we may be tempted to write off the building and construction sector altogether. This would be a mistake for at least three reasons.

Firstly, traditionally, the building and construction sector acts as one of the leading indicators of real, sustained economic recovery. In particular, in normal recessions, the recovery is led by the early return of firms to capital investment, including in buildings and structures, usually closely followed by an increase in residential investment by the households. Both the US and the UK are showing this pattern over the last two years. While Ireland's recession is driven by deeply structural factors, one can expect any sustained growth momentum to occur only on foot of renewed domestic investment.

Thirdly, some of the recent data on building and construction sector does warrant extremely cautious optimism.

Let's take a look at the main sources of information on the state of our construction industry. These include, CSO's quarterly reports on volume and value of output in the building and construction sector, as well as more forward-looking planning permissions through Q1 2013. We also have more current Purchasing Managers Indices (PMI) covering data through July 2013. Monthly CSO data on property markets indicates, albeit imperfectly, the trends in the demand for residential investment. Last, but not least, we have international forecasts and data from the Eurostat, ECB and Euroconstruct.

On the surface, the data concerning the building and construction output points to some improvements in the sector activity and dynamics. Per CSO, year-on-year, the volume of output in building and construction increased by 10.7 percent in Q1 2013.  There was an increase of 9.5 percent in the value of production in the same period. The annual rise in the volume of output reflects year-on-year increases of 26.8 percent and 2.4 percent respectively in civil engineering and non-residential building work. Alas, output in residential building decreased by 2.5 percent. Not exactly the growth breakdown one would expect from a building investment recovery.

The above weak positives, however, are further undermined by the fact that the levels of activity in the sector remain extremely low by historical and international comparatives.

Building activity in residential construction sub-sector back in Q1 2006 stood at 107.9 as measured by value index. In Q1 2013 the same stood at 7.8. The latter number represents an increase of just 0.5 points above the all-time low. Non-residential building sub-sector posted shallower peak-to-trough declines, although these still are well in excess of anything seen in normal recessions and in other euro area countries. Despite the shallower contraction, the non-residential construction also showed poor pick-up dynamics: the sub-sector output is now up just 2.6 points relative to the absolute low in Q2 2012.

Truth is, most of the recent gains in CSO’s building and construction indices to-date have been driven not by the organic private sector investment, but by civil engineering activities. Forth quarter running, this trend suggests that although, the construction sector might have stabilised, this stabilisation appears to be driven simply by the unprecedented fall in sector activity to-date, rather than by any sizeable pick up in demand for traditional building and construction investment.

Instead of a U-shaped recovery, we are currently witnessing a continued L-shaped disaster.

More forward-looking indicators, such as the construction sector PMIs strangely contradict the data on the actual sector activity reported both by the CSO and by the Eurostat. Since around mid-2009, civil engineering PMI persistently signaled sharper contraction than overall construction sector PMI and its housing and commercial sub-sectors. More ominously, PMIs across all sub-sectors of construction industry remain in a contractionary territory every month from January 2012 through July this year. One exception is a weak expansion signaled by the housing sub-index in July this year. No matter how one spins the PMI data, however, the indicator continues to show the sector shrinking, not expanding across all quarters since the onset of the crisis, including Q1 and Q2 2013.

This points to the deeper, structural problems in the sector.

Demand for new construction remains exceptionally low, outside the small sub-pockets of activity, such as premium segment of Dublin City apartments and houses, and the highly tailored top quality office space suitable for the booming services-exporting MNCs. The former trend is clearly evident in this week's residential property prices figures published by the CSO. It is further confirmed by the data showing continued weakness in demand for residential properties based on the volume of transactions in the markets. The latter is evident in industry reports and in aggregate shift in exports growth away from manufacturing and professional services toward ICT services.

All-in, investment in buildings and construction remains effectively nil across the economy and without a significant pick up in this investment, the sector performance is going to be highly volatile and concentrated in specialist areas, such as agricultural facilities and wind farms, to be accurately reflected in the high-level data.

This month, ECB Monthly confirmed that the malaise affecting the building trade in Ireland is similar in drivers to the demand-induced recession in the euro area. The ECB linked construction industry slump in Europe to weak macroeconomic conditions, debt-stricken households and dysfunctional banking system. All factors present in the euro area case for the building sector continued decline are also at play in Ireland.

Which brings us to the last piece of evidence necessary to complete the puzzle: the planning permissions. CSO data showed that the number of planning permissions for houses actually fell 9.3 percent year-on-year, reaching the second lowest level in history of the data series. Number of permissions for apartments also fell, by 18.4 percent on Q1 2012. More ominously, aggregate activity in the construction sector, as measured by the new permissions granted, shrunk across the board and hit an absolute lowest point for any quarter since Q1 1975.

In summary, there is little evidence to-date of a sustainable and robust uptick in Irish construction sector activity, while there is plenty of evidence that the sector output is close to stabilising at the extremely low levels. After six and a half years of ongoing declines, we now have a construction industry showing ‘bouncing at the bottom’ pattern of output. Alongside the rest of the economy, Irish building firms are desperately searching some catalyst for the restart of the investment cycle.

This realisation, coupled with the recognition of the overall importance of the sector to the Irish economy in the long run and as a potential driver for the recovery should lead to a significant re-think in the policy stance toward the sector.

Targeted tax incentives for construction sector have not worked and will not work in the current environment of subdued demand. Instead, we need to push for a more aggressive deleveraging of the households and development-related property sector firms. The former means re-thinking our approach to mortgages arrears to include mandatory and enforceable restructuring and rebalancing of the household debt to deliver sustainable and quick resolution of the debt crisis. The latter implies a re-drawing of the property tax to cover land holdings.

While we might like to stimulate the demand side of the investment equation in building and construction sector, such stimulus is simply not on the cards for the Exchequer struggling with excessive fiscal deficits and debt and for the economy suffering from severe private sector debt overhang. Focusing on dealing with the household debt problems, and holding the course on fiscal targets while trying to avoid tax increases and capital spending cuts is all we’ve got as the potential tools for spurring some recovery in the construction sector. 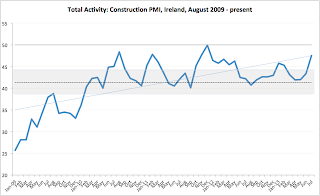 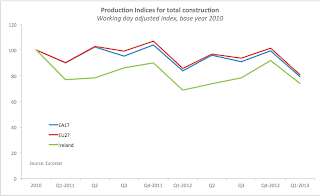 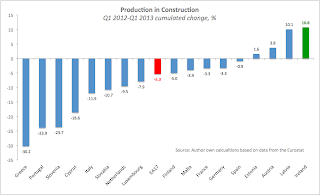 This week, the IMF published a research paper co-authored by the fund own researchers with participation from the University of Geneva that looked at multi-annual fiscal consolidations planned across the 17 OECD economies in the period between 1980 through 2011, including those covering the current crisis period. The researchers asked a simple, but highly contentious question: are sovereign debt markets pressures responsible for forcing the governments into adopting austerity programmes.

The study has found the only in a third of all cases of past and current austerity programmes, the plans for fiscal consolidations were driven by market pressure. In the nutshell, markets are important, but by far not the main sources of pressure on the highly indebted and/or deficit-stricken governments. The authors further found that markets exerted pressure on the governments in the cases where fiscal and macroeconomic fundamentals have deteriorated more severely than in an average crisis. In other words, the markets are not the culprits behind the severe austerity, but rather a reflection of the underlying crises present in the first place.  Per authors: “If history is a guide, the absence of market pressure will not inhibit fiscal consolidation in advanced economies with currently weak fundamentals, such as high debt ratios, adverse debt dynamics or below trend growth.”

So the fabled ‘bad wolves’ of the bond vigilantes so frequently evoked by the austerity-planning Governments in the popular media and on election trails are nothing more than the ordinary messengers conveying the reality of fiscal and monetary mismanagement.

Posted by TrueEconomics at 6:34 AM