In light of the Government push for stricter tobacco regulations while happily cheering the Arthur Day and providing support for the drink celebrations across the country, here's an interesting 2010 study (full citation at the bottom of the post) of the effects of various drugs in terms of causing various types of individual (user) and common (social) harm. Note: I have no objection to the idea that taken in moderation, alcohol is hardly harmful to anyone involved. Then again, I have possibly an objection as to what constitutes moderation in the case of Arthur Day level of booze consumption in Ireland…

Background: "Proper assessment of the harms caused by the misuse of drugs can inform policy makers in health, policing, and social care. We aimed to apply multi-criteria decision analysis (MCDA) modelling to a range of drug harms in the UK."

Method: "Members of the Independent Scientific Committee on Drugs, including two invited specialists, met in a 1-day interactive workshop to score 20 drugs on 16 criteria: nine related to the harms that a drug produces in the individual and seven to the harms to others. Drugs were scored out of 100 points, and the criteria were weighted to indicate their relative importance."

Interpretation: "These findings lend support to previous work assessing drug harms, and show how the improved scoring and weighting approach of MCDA increases the differentiation between the most and least harmful drugs. However, the findings correlate poorly with present UK drug classification, which is not based simply on considerations of harm." 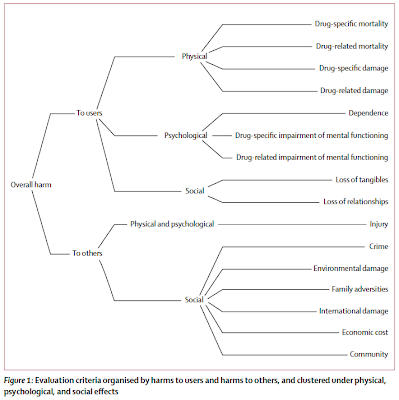 Overall results along two main branches of the methodological tree: 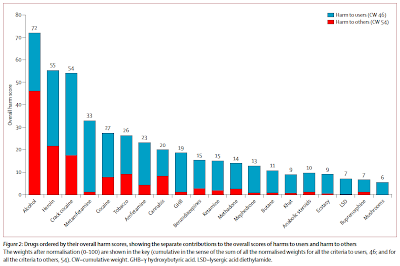 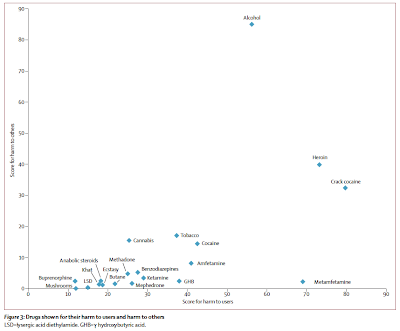 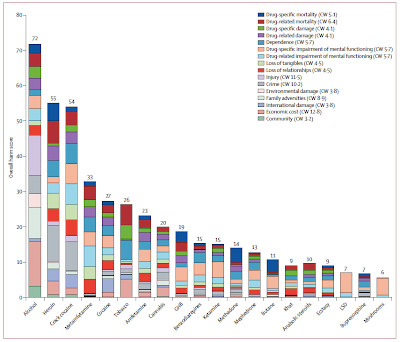 As I quipped on twitter earlier this week, maybe before introducing plain packaging laws for tobacco products we should introduce blank labels for alcohol too? After all, if restricting the former is about public and personal health, restricting the latter at least as much would make sense. Not that I subscribe to the idea that the former is any good of a policy tool... just pointing the inherent contradiction in Government's strategies to deliver improvements in public health...

Note: I wrote about research on links between alcohol and mortality here (see bottom of the post).

"Members of the Independent Scientific Committee on Drugs, including two *invited* specialists, met in a 1-day interactive workshop to score 20 drugs on 16 criteria."

I'm not saying proper studies won't show ill effects of excessive alcohol consumption but that 'workshop' using *invited* specialists does not look like hard data to me...

I don't understand why Arthur's Day should lead to such problems - anymore than a large gig, festival etc. It's not like buying a ticket gets you free Diageo products all night so a good question is why people would drink more at its events than at a regular gig or festival.

For instance, I've been to comedy events sponsored by beer brand X where you got several free pints. I didn't notice audience members in need of a trip to A&E afterwards.

If the majority of the population are moderate drinkers and dont abuse alcohol; at what point do we say the solution isn't restricting alcohol access\advertising but cracking down on the behaviour of the minority who do abuse it?

How would plain packaging of products do anything to affect that minority's relationship with alcohol? If someone is buying the cheapest drink in an off licence why would they care if the label says brand X, brand Y or no brand?

It's much easier for a lazy governments to tell a company how to package it's product; it's a different story getting the police to do something about a yob at 1am on a saturday night on Camden Street.