BIS Quarterly (http://www.bis.org/publ/qtrpdf/r_qt1309a.pdf) has some interesting analysis of the US yields:

"An examination of the rise in US bond yields between May and July reveals as a key  driver the uncertainty about the future stance of monetary policy. The sell-off mainly shifted bond yields at long maturities, while the short end of the yield curve remained anchored by the Federal Reserve’s continued low interest rate policy." 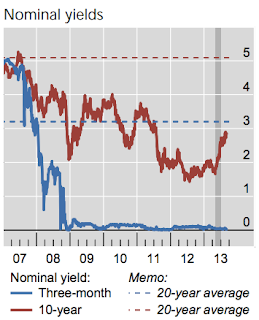 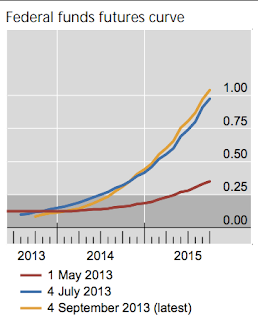 "In addition, the federal funds futures curve also shifted upwards, signalling market perceptions that a policy rate exit from the current 0–0.25% band had become quite likely to occur as early as in the second quarter of 2014."

"A model-based decomposition of the  10-year US Treasury yield, which sheds light on the various drivers of these shifts,  indicates that the recent yield spike was largely the result of a rising term premium. This is consistent with markets reacting to uncertainty about the extent to which an improving economic outlook would affect future policy rates. It is also consistent with uncertainty as regards the impact that a reduction in the Federal Reserve’s purchases of long-term Treasuries would have on these securities’ prices."

"In comparison, the bond market sell-offs in 1994 and 2003–04 were different in  nature. During those episodes, long-term nominal yields rose together with policy rates or on the back of expected increases in future real interest rates and inflation. By contrast, inflation expectations were largely unchanged in the second and third quarters of 2013."

Basically, as we all know  by now, current yields have nothing to do with inflation and are solely priced by reference to expected liquidity conditions. Or put differently, nothing but printing press matters. So much for monetary policy-real growth links...


And BIS does deliver a nicely focused warning: "Their recent spike notwithstanding, bond yields in mature markets remained low by historical standards. For one, the yields on sovereign bonds in the largest world economies had been on a downward trend since 2007. And investment grade spreads in the United States, the euro area and the United Kingdom declined respectively by 75, 110 and 190 basis points between May 2012 and early September 2013, falling past their earlier troughs in 2010 and reaching levels last seen at end-2007. The evolution of the corresponding high-yield bond indices was similar, with spreads declining by 230 to 470 basis points over the same period."

Go no further than the second chart above: reversion to the mean is going to be brutal. And this brutality will only be reinforced by the fact that quietly, unnoticed by most, leverage has returned: overall share of leveraged and highly leveraged loans in total syndicated loan signings is now at all-time high. 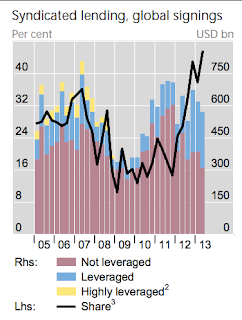 Starting with page 6 (above link), the quarterly is a must-read as it exposes growing problem with high risk debt accumulation by investors and that amidst the historically low rates. The system is back at end-of-2007 levels of credit underpricing. The big difference today in contrast with 2007 is that no one has any bullets left to fight the bear, should one appear on the horizon.

Posted by TrueEconomics at 10:10 AM