This is an unedited version of my Sunday Times article from September 8, 2013.


Back in the heady days of the Celtic Tiger, Irish economics commentariat and banks experts were extolling the virtues of Ireland's 'demographic dividend'.  A confluence of high birth rates, declining mortality and robust inward migration was propelling Ireland toward perpetually rising population counts. With these, the argument went, Ireland faced the ever-lasting expansion of domestic demand and labour supply.

Less than a decade later, the dividend has all but vanished in the maelstrom of rampant emigration. More ominously, as the latest trends suggest emigration is now reaching well beyond the traditionally at-risk sub-categories of the recent newcomers to Ireland and the long-term unemployed. Instead, outflows of professionals and middle-class families are now also on the rise.


Cutting across this nirvana of consensus permeating the Irish society around 2004-2006, few dared to suggest that something major was amiss in the aforementioned theory. Yet, the risks to Ireland's 'demographic dividend' were visible even at the time of the boom. At the peak of the Celtic Tiger and since the beginning of the Great Recession, I wrote about them in Irish media, including in these very pages. The first threat to our long-term population trends even in 2004-2006 period related to the risk of a structural economic slowdown. The second one came from the demographic ageing of the core European states and the resulting inevitable rise in wages premium for younger workers in these economies.

With the onset of the Great Recession, increased job markets uncertainty and declining disposable incomes have acted to boost Ireland’s birth rates, seemingly supporting the argument of some analysts that the demographic dividend was still alive and well then. In 1995-2007, there were 56,423 annual births on average in the Republic. In 2008-2009 average annual number of births stood at 74,183. Changes in the incentives for having children offered by the Great Recession were clearly the factor pushing fertility up. Alas, the latest data covering the twelve months through April 2013 shows that this process is now exhausted with 2013 births counts down 8.7 percent on 2010 peak.

Offsetting the initial rise in births, the Great Recession pushed Ireland back into becoming a net emigration nation once again, for the first time since 1995. Data published by the CSO last week shows that in 12 months through April 2013, total of 89,000 people have left the country. This is the highest number since the records started in 1987. There was a small increase in immigration driven primarily by importation of specialist foreign workers by the booming ICT and IFSC sectors, plus the return of students working on 1 and 2-year visas abroad. Despite this, 2013 marks the fourth consecutive year of net emigration.

Current rates of emigration are running ahead of the 1987-1995 period average. Back then, net emigration from Ireland averaged 14,811 per annum. Over the last four years, the average net outflow of people from this country stood at 30,600 annually.

The twin squeeze of declining birth rates and strong net emigration has resulted in 2013 posting the weakest overall population changes in 23 years. In 12 months through April 2013, Irish population grew estimated 7,700 - one seventh of the annual average for the 1991-2007 period. This brings us dangerously close to a rerun of the 1980s-styled demographic collapse when Irish population actually declined in three years through 1990.

Truth be told, we are probably caught in this 'back to the future' demographic warp already.

Our official statistics show inflow of 29,400 immigrants, excluding the returning Irish nationals and the immigrants from the Accession states, in the 12 months through April 2013. Majority of these are likely to be foreign workers brought into the country temporarily by the MNCs. Moreover, the current CSO estimates are based on PPS numbers, foreign visas issuance, as well as household surveys. These methods are potentially underestimating the numbers of those Irish nationals who have left the country, but still have close family remaining here. Last, but not least, our data is probably also underestimating outflows of the EU12 Accession states’ nationals.

Controlling for the above factors, it is highly likely that we are already experiencing a reversal of the ‘demographic dividend’ and the onset of the zero-to-negative population growth in Ireland since 2011. This has meant that our population today is some 436,000 below where it would have been if the trend established between 2000 and 2007 were to continue.


Ireland's emigration flows and population changes by age and nationality are retracing the structural collapse of our economy: the story of our paralysed and polarised society burdened by debts, taxes, unemployment, lack of opportunities for career advancement and fear for the future.

From 2010 through 2013, the numbers of Irish nationals opting to leave the country net of those returning from abroad have been rising steadily. The net outflow of Irish nationals more than tripled between 2010 and 2013. If between 2006 and 2008, some 32,100 more Irish people returned home than left Ireland, over the subsequent 5 years, 90,700 more Irish people emigrated from the island than moved here.

In addition to the above, there are some new undertones that are emerging in the data over the last two years.

Official data on population breakdown by age groups shows that the bulk of population declines over the crisis in Ireland took place in the 15-29 year olds cohorts. However, since 2011, the 30-39 year olds cohort is also posting declining numbers. These age-related trends are now pushing us toward twin age dependency scenario where the numbers of old age-dependent residents and young age-dependents peak at the same time. Top productivity cohorts - ages 34-54 - grew by 124,000 since 2007, while old and young age dependents cohorts are up 203,600 over the same period of time. Working age cohorts (20 years of age through 64 years of age) accounted for 62.4 percent of Irish population in 2007. This year the ratio is 59.7 percent.

Compared against the age distribution of the unemployment, the latest trends suggest that jobs losses are no longer the sole drivers of emigration. Instead, it appears that emigration is increasingly afflicting those groups of population that are generally more secure in their jobs. The potential reasons for this are household debt overhang and lack of promotional opportunities open to the younger workers here.

With banks starting to move more aggressively against distressed borrowers, these sub-trends are likely to strengthen over time.

Economic and social losses arising from debt crisis are also likely to increase as migrants due to debt and/or career considerations are more likely to carry with them above average skills, productivity and earning potential. In addition, these migrants are less likely to return to Ireland, especially if the debt they leave behind remains on the record against their names.


The impact of the current wave of emigration on our society and economy is likely to be more long lasting than that of the previous emigration waves. This conjecture is supported by a number of considerations.

Today’s emigrants are conditioned by their education, past employment experiences and social values systems to accept the mobile nature of their future careers. In other words, having left Ireland they are unlikely to look back at their homeland as a natural home. Increasingly, Irish emigrants are setting their sights on geographies that are more remote from Ireland than the UK and continental Europe. This puts more stress on their ties to Ireland. The latest data showing that emigrants to countries like Australia, New Zealand and Canada tend to show lower returns in recent years. In addition, debt legacy will hold many of them back from returning to Ireland in the future. Age-related considerations with further reinforce this effect, with many emigrants in their mid-30s and 40s today facing a prospect of never again being able to secure a mortgage in Ireland were they to attempt a comeback. Lastly, a major factor in today’s emigration from Ireland is that it involves greater proportion of emigrants who enter their host destinations legally, thus increasing their chances at future naturalisation.

Overall, CSO data confirms the above observations, as fewer and fewer Irish nationals are today returning back home.


Far from being a solution to our economic woes or a temporary safety valve for the economy saddled with high levels of unemployment, current wave of emigration from Ireland is undermining the prospects of economic recovery here. More crucially, by removing more politically and socially disenchanted and activist younger people and families, the emigration is acting to mute the voices of dissent here. With them, the raison d’etre for the robust political, social and economic changes is slipping away too. 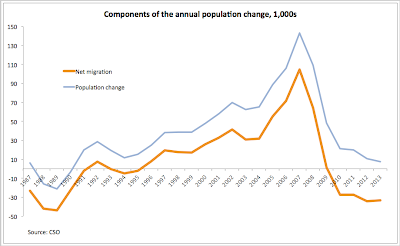 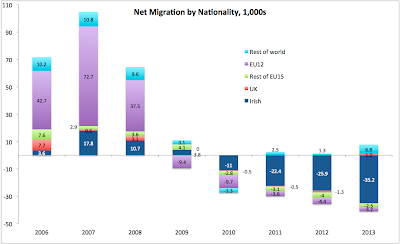 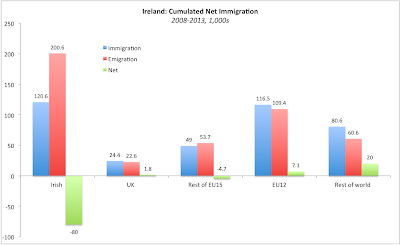 Markit-Investec Purchasing Manager Indices for Irish Manufacturing and Services have both posted significant gains in August, compared to July. August PMI for Manufacturing came in at 52.0, showing the fastest pace of economic activity growth for the sector since November 2012. Meanwhile, Services PMI reading of 61.6 was the highest since February 2007. Both indices are subject to significant distortions from the multinational companies based here. However, Services PMI is subject to more severe skews due to the tax arbitrage activities by companies operating in international financial services, ICT services and auxiliary business support services. Nonetheless, caveats aside, the latest data strongly suggests that Ireland has moved out of the triple-dip recession in Q3 2013 and will post growth in GDP for the three months through September. Aside from this, however, the PMIs continue to signal relative weakness in the domestic sectors compared to exports and employment growth signals have weakened in both sectors of the economy. Finally, additional good news were signaled by the improved profit margins in Services, now third month running and marking the first sustained upward momentum in profits in five years. This, however, was not the case in Manufacturing, where input costs rose against basically unchanged output prices.

Posted by TrueEconomics at 4:49 PM