This the second part of WLASze: Weekend Links on Arts, Sciences and zero economics (part 1 is linked here). Enjoy!


Financial crises tend to have profound and long-run impacts on the societies they visit. This much should be pretty clear to the readers of this blog (from economics side of my musings). However, no man is an island and, thus, no art is an island either… What about financial crises impact on arts? Did gloom-n-doom of the Great Depression result in the darkening abstraction in arts, ultimately leading to the emergence of urbanist photography and design, as well as early abstract expressionism? Motherwell's Spanish Republic studies (http://www.moma.org/collection/object.php?object_id=79007) as culmination of darkness and pain? 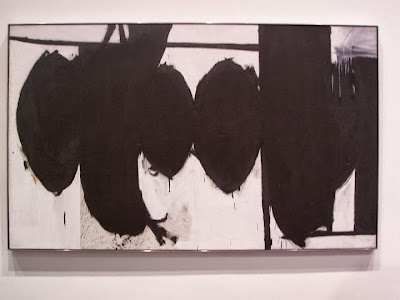 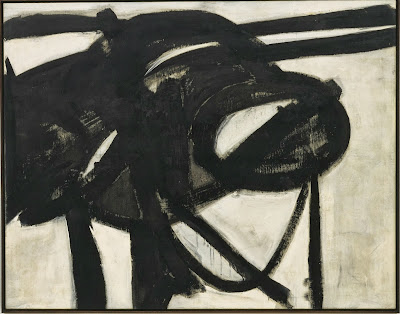 Although all of these post-date the war, they are hardly infused by the giddy optimism of the 1950s and experimentation of the 1960s, instead carrying the pre-Vietnam fear and memory of the past, foreboding the replay of the previously experienced or at least a threat instead of foretelling a new era…Or more immediate deepening of German expressionism? The sombre consolidation of Bauhaus outside Weimar?

Enough of the argument here… Instead, back to the current events. Here's an interesting post based on Franco “Bifo” Berardi talk at Pratt Institute on his book The Uprising: Poetry and Finance, "which considers poetry as a salve in the wake of the international financial crisis. Or, as reviewer David Cunningham puts it now in considering the book for the UK’s Radical Philosophy journal, the book “posits a parallel between ‘the deterritorialization effect’ which has, on the one hand, ‘separated words from their semiotic referents’ and, on the other, separated ‘money from economic goods.’” Read and judge for yourself:
http://www.poetryfoundation.org/harriet/2012/11/audio-now-online-from-franco-berardi-talk-on-the-uprising-on-poetry-and-finance/?woo


On a brighter side of things, crises teach us (or attempt to teach us) to distill things more to the basics, to the necessary, striking out the superfluous. This can be a torturous process, but it can also be a path to beauty. Modern Japanese architecture, having faced the demons of severe constraints, often shows the emergence of angels of beauty out of the challenge of pushing organic spaces into contained sites. Two brilliant examples:

http://www.dezeen.com/2013/09/16/house-in-fujizakura-by-case-design-studio/
Cool, tranquil, beautiful and, yet, too individualistic for being inhabitable - a shell for a hermit crab of sorts… 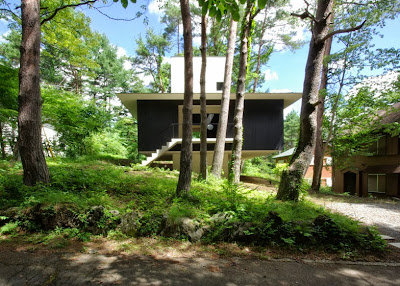 And via deezen.com another example - this one a perfect balance of view, space, light and yet jigsawed into a challenging site… 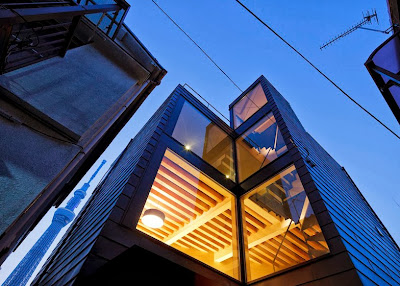 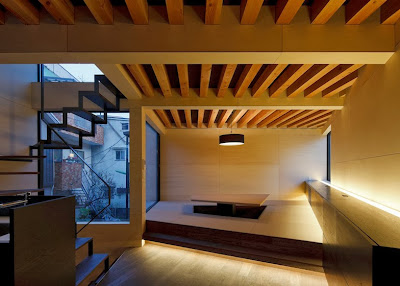 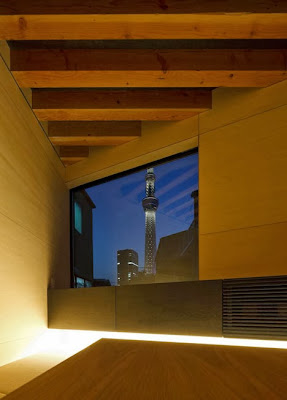 There is a fundamental difference between 'compressed' European architecture and Japanese architecture. This difference arises from two distinct drivers for challenges of space. In European context, some (not all) of the spacial challenge rests on the basis of desire to appear to be 'environmentally conscious' - in other words, we often tend to build rural houses on micro scale to pretend that this 'helps the environment'. This gives our small rural houses architecture a forced, fake dimension. In the case of Japan, physical space constraints generate organic, unforced, organic effort to design spaces on intimate scale. End result, even urban architecture in Japan is often truly a balance of space, design, liveability, tradition and subtle, even modest distinction.


The testaments to the 'fake' constraints in the Western World are abandoned spaces - which in my view (aside from presenting a challenge as to why we need severe spatial constraints of design in the firs place) carry almost intrinsic artistic beauty in and by themselves. I wrote about this before in previous WLASze posts… so here are few more links documenting abandonment:
http://www.boredpanda.com/abandoned-places/ 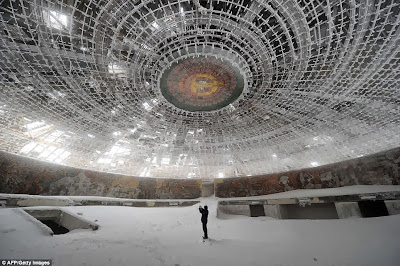 H/T for the above to @nicolematthews1


Abandonment is no threat, however to the greats of European art. Grand Palais in Paris is hosting the first in 40 years retrospective of George Braque. To me, Braque is ahead of the other great, associated closely with him - Picasso, especially in the context of defining fauvism and cubism.
http://www.france24.com/en/20130920-rare-braque-exhibition-opens-grand-palais-paris-picasso 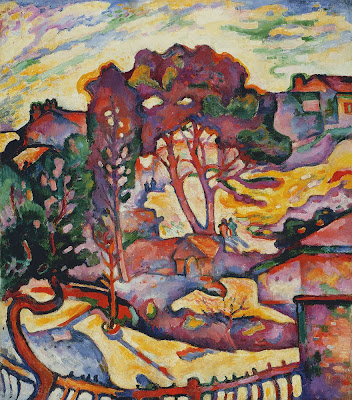 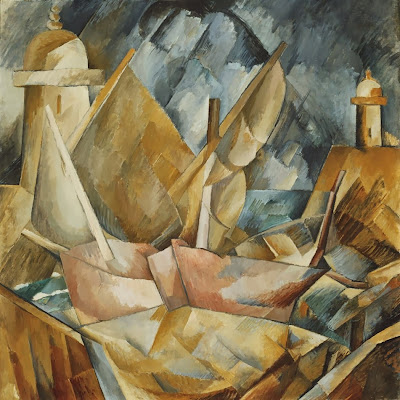 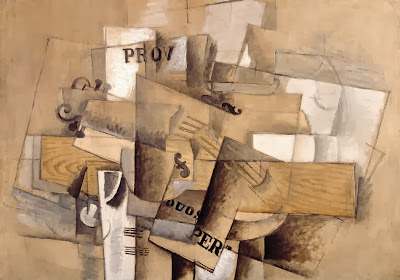 Picasso and Braque... and Mark Tansey's take on their dual significance:

And from cubism (a quasi-scientific approach to space, light and positioning in painting) to physical positioning in a stream of light. Here's a massively important paper:
"By Bernoulli’s law, an increase in the relative speed of a ﬂuid around a body is accompanies by a decrease in the pressure. Therefore, a rotating body in a ﬂuid stream experiences a force perpendicular to the motion of the ﬂuid because of the unequal relative speed of the ﬂuid across its surface. It is well known that light has a constant speed irrespective of the relative motion. Does a rotating body immersed in a stream of photons experience a Bernoulli-like force? We show that, indeed, a rotating dielectric cylinder experiences such a lateral force from an electromagnetic wave." In other words, light has the same properties as air and water in their ability to create, for example, support drag that holds airplanes in the air...

From the authors: "The forces obtained here are only a fraction of the incident radiation pressure and seem to require infeasible rotation rates, but we expect that they can be resonantly enhanced by techniques similar to those that have been used by other authors to enhance scattered power for a given particle diameter. Mie resonances are already visible in Fig. 4, but much stronger resonant phenomena can be designed… Material dispersion will contribute an additional source of lateral force… Such enhancement mechanism, …may permit the future experimental observation and exploitation of optical “Bernoulli” forces. 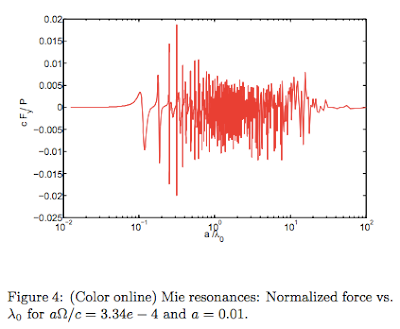 We are far away from 'flying on light' but we know that theoretically it is feasible… And more… can light create 'vacuum' as a flow of water does?.. Injection pump for light anyone?..


And to conclude, a splash of hydraulic / fluid dynamics art from the Science Gallery (Trinity College), this time in Canada: http://www.therecord.com/whatson-story/4117146-big-splash/ Surface Tension, watery exhibition from @ScienceGallery opened in @THEMUSEUM in Kitchener, Ontario. Congrats to all involved! Great to see SG spreading its wings around the globe. Note, I covered SG latest exploits in Dublin here: http://trueeconomics.blogspot.ie/2013/08/382013-wlasze-part-1-weekend-links-on.html.

Posted by TrueEconomics at 3:48 PM