CSO published Q2 national accounts for Ireland today and these are worth detailed analysis, which I will break up into a series of posts next.

Starting with the headline GDP and GNP figures:

In Q2 2013 Irish real (constant prices) GDP fell 1.17% compared to Q2 2012, compounding the previous fall of 1.04% y/y recorded in Q1 2013. On an annual basis, this marks the fourth consecutive quarter of real GDP contractions, the longest period of continuous contractions since the end of Q2 2010. Currently, real GDP stands 7.83% below the historical peak.

The swing in the direction between GDP and GNP was driven in Q2 2013 by a 5.85% drop in the outflows of transfer payments to the rest of the world compared to Q2 2012, which compounded a massive 28.26% decline in the transfer payments recorded in Q1 2013. In other words, GNP improvements appeared to have been sustained by a massive parking of MNCs profits in Ireland. The reasons for this are unknown, but we can speculate that the MNCs are holding back profits from transferring out of Ireland due tot ax considerations and due to subdued global investment activities. It remains to be seen what happens to the GDP and GNP were the MNCs to begin once again actively exporting retained earnings. 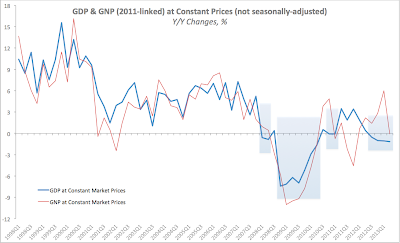 Note: shaded periods show episodes of more than 2 quarters consecutive contractions (here on y/y basis, so these are not official recessions) 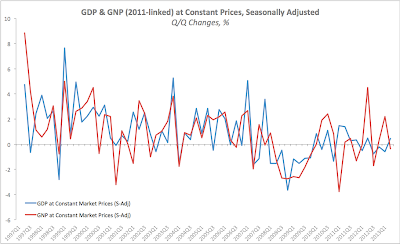 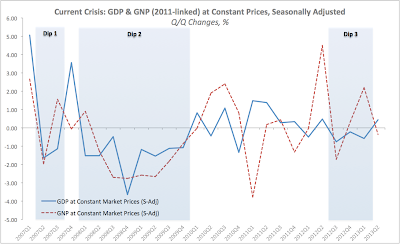 On historical comparison basis, table below summarises latest movements in GDP and GNP: 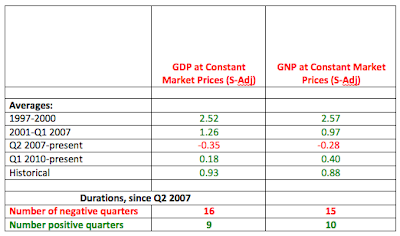 So a summary: we are officially out of the third dip of the Great Recession. This is a good news.

Bad news is that this data is once again being paraded around as a sing of 'stabilisation' of economic activity. Alas, the first time we've heard this 'stabilisation' argument was in Q1 2010, when the main - longest and deepest - second dip ended. Since then, Irish economy has managed to grow by just 2.63% in real GDP terms and only 3.54% in real GNP terms. Since the onset of the recovery, we have posted average quarterly growth of only 0.18% (seasonally-adjusted figures) and this effectively means that the economy is in a stabilisation pattern closer to coma than to a sustained recovery.

Good note to all of this is that, as mentioned above, I do expect stronger activity to be recorded for Q3 2013 and possibly for Q4 2013 as well.
Posted by TrueEconomics at 5:05 PM