So the Irish Fiscal Council published tonight "The Government’s Balance Sheet after the Crisis: A Comprehensive Perspective" paper authored by Sebastian Barnes and Diarmaid Smyth.

The paper is good, interesting, but as always (not a criticism) is open to interpretations, questions and debate. One criticism - it is hard to wade through double-counting and incomplete reporting of the Government assets and charts nomenclature does not appear to correspond to the one used in the text. One simple table listing all assets with the estimated value attached and a column outlining core risks to valuations involved would have saved the authors pages and pages of poorly constructed material.

Overall, however, it is good to see the broader approach taken by the authors to the problem of fiscal sustainability of public finances in Ireland. We rarely observe such. And I will be blogging on this later.

But the very interesting bit relates to the final official estimates of the Promissory Notes deal. Keep in mind, here's my on-the-record estimate of the net benefit from the deal in the range of 4.5-6.3 billion euros over 40 years horizon with most of this accruing earlier on in the life span of the deal. Here's the record (see box-out at the end of the article: http://trueeconomics.blogspot.ie/2013/03/2332013-sunday-times-10032013.html).

So here are the Fiscal Council estimates: 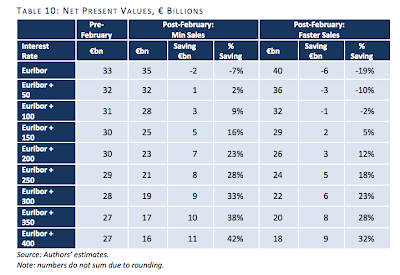 Mid-range minimum sales of bonds scenario: net savings of EUR 5-7 billion. Accelerated sales scenario: mid-range estimate of EUR 2-3 billion. Base Case for Euribor+150 and Euribor +250 at minimum levels of sales of bonds: EUR4 billion and EUR7 billion. The difference to my estimate is immaterial since I am looking at a longer time horizon for my estimates than the model used by the Fiscal Council does.

Reminder - some other estimates of the net present value of the savings from the deal run into 19 billion euros… ahem!..

I am looking forward to studying the spreadsheet with the model included which the FC is promising to make available on their website.
Posted by TrueEconomics at 7:48 AM