CSO published Q2 national accounts for Ireland today and these are worth detailed analysis, which I will break up into a series of posts next.

In the previous post, I covered headline GDP and GNP figures, y/y and q/q changes. As a reminder, the headline conclusions were that:

Q2 2013 release allows us to look at half-annual GDP and GNP changes, something that removes some of the quarterly volatility and also brings us closer to the analysis that is relevant from the budgetary perspective. Remember, budgets are not based on quarterly forecasts, but annual ones.

H1 2013 GNP grew 2.17% over H1 2013 compared to H2 2012, marking the third consecutive 6-months period of growth. In other words, GNP perfectly countermoves against GDP. Why? Because of the changes in transfers of earned profits by the multinationals. 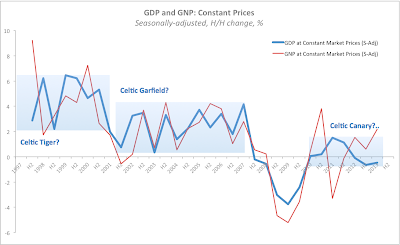 Here's an interesting thing. The chart above shows three periods of Irish growth history (I am being sarcastic/humorous here, so no offence intended):


You can see that the slowdown in growth is not only due to the crisis, but appears to be structural in nature. The Canary part is because Irish economy's fundamentals are such that we should be growing at 3.5-4.5 percent annually. Yet we are growing at - say averaging Celtic Garfield and Celtic Canary periods - at 1.35-1.4 percent annually. This is the slowdown toward the European levels of growth for Ireland... something to think about?

Next, take a look at the levels of activity based on 6 months figures: 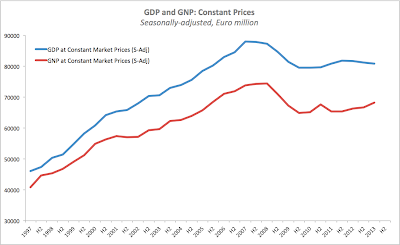 Our current H1 2013 GDP is down 7.98% on peak levels, so we are still far away from recovering to pre-crisis levels in real terms. In fact, at current rates of growth (that is taking 3-year average, since current annual rate is negative), it will take us until 2029 before we can reach real levels of GDP consistent with the pre-crisis levels. When someone says we have a lost decade, what they really mean - in real GDP terms - is that we are likely to have lost 23 years. And that does not count the opportunity cost of foregone growth. That is one hell of a long 'lost decade'.


Stay tuned for more analysis of QNA results.
Posted by TrueEconomics at 10:49 PM