Residential Property Price Index for Ireland for July 2011 was released earlier today by the CSO, showing continued deterioration in property prices across the board.

Per CSO: "In the year to July, residential property prices at a national level, fell by 12.5%. This
compares with an annual rate of decline of 12.9% in June and a decline of 12% recorded in the twelve months to July 2010." Chart below illustrates: 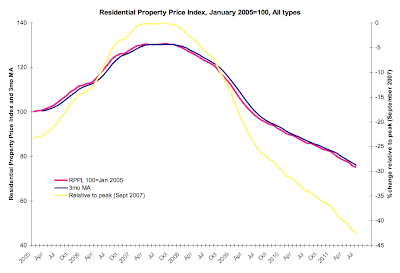 Residential property prices fell by 0.8% in the month of July. This compares with a
decline of 2.1% recorded in June and a decline of 1.3% in July of last year. To give a bit more granularity to the data:
Using 7 months of 2011 data, we can forecast expected declines in the index for 2011 as a whole: 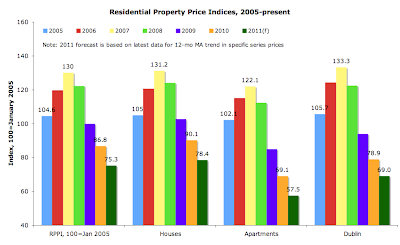 Let us make another set of important calculations. Recall that section 73 of the NAMA Act 2009 established the definition of the cut-off date for NAMA valuations. This date was later set at 30 November 2009. NAMA then applied an LTEV uplift on properties valued to that date. According to NAMA own business projections, the agency will require 10% increase in property values referenced to LTEV and November 30th 2009 cut-0ff-date to break even. In addition, NAMA claimed that its valuations are based on the consulting report they received from London Economics that timed property markets bottoming out to the latest Q1 2010.

Well, since the cut-off date, Irish residential property has now fallen a whooping 20.02% and relative to the end of Q1 2010, when NAMA expected the bottoming of the property cycle, the property values are down 16.28%. Ooops...

Back to the data: 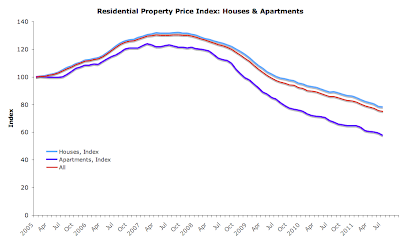 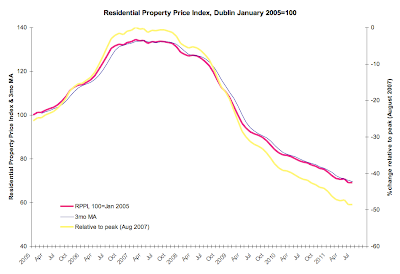 Posted by TrueEconomics at 4:52 PM