The Central Bank of Ireland today published the latest data on mortgage arrears and repossessions for 2Q 2011. Per CBofI data (note, much of the analysis is my own):
Now, let me run though the figures in more aggregate detail. Take together all loans that are in arrears 90 days or more, plus repossessions and loans that are restructured, but are not in arrears. Clearly, these loans represent some indication of mortgages either at risk or defaulted. Let's call these such.
Let me sum the above up: in 2Q 2011, the value of mortgages that were either in arrears 90days and over or were restructured and not in arrears accounted for 15.2% of the entire mortgages pool in Ireland.

Note that in the above table, the rates of risk increases are outpacing the rate of households deleveraging almost 15 times to 1.

We sooooo obviously don't have a mortgages crisis on our hands, that it all looks rather sustainable, ...if you stick your head deep into the sand bank... kinda like this... 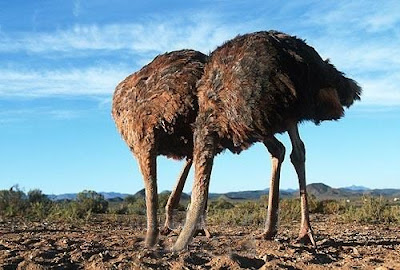 Posted by TrueEconomics at 8:10 PM

I have an idea on what could be done quite quickly and without the “Moral Hazard” that everyone is so afraid of.

There seems to be c.750k Mortgages in the country of which c.400k of them are tracker mortgages. Some economists have calculated that in order to give up a tracker mortgage the bank would have to reduce the principal by between 30-50% depending on the margin and term left on the loan. These Mortgages are loss making for the bank and banking sector as a whole and I think that collectively could be used as a bargaining tool for the whole 750K mortgages.

What I would propose is that every residential mortgage be marked down ( preferably to market price, but the 110% of market price that Iceland have could work too, a token writedown for small mortgages ) , in exchange for this everyone should come off their tracker and all mortgagees should be offered a long term fixed rate mortgage at a rate comparable to those in France or Germany. This would allow the banks to change their large loss making books to smaller profitable books which could be sold off at a later point if necessary.

I would see the following immediate benefits:

1. Individuals would have the principal written down removing the negative equity issue and making people more mobile with a greater propensity to spend.

2. If everyone is then on Fixed Rates, No more would people be at the mercy of ECB and Bank own interest hikes.

3. With everyone on the new fixed rate, it would provide an opportunity for foreign lenders to enter the market and undercut this new fixed rate.

The state should also introduce a capital gains tax on any gains achieved from the written down mortgage ( This could have a sliding scale element, Sell it in 2 years pay 50% CGT, keep it for 20 years pay nothing )

The solutions that are being talked about now, writing down some peoples loans will only temporarily fix things as as soon as rates start to move higher, a new wave of people in difficulty will bubble to the surface…

The above would need to be done in conjunction with new Bankruptcy laws and non-recourse lending as even with the above a lot of people still won’t be able to keep their property and lifestyle.

There is probably a million holes in the above and the numbers need to be worked through, but I don’t think enough is being said about the Tracker Books in the Banks which are unprofitable and will discourage competition ( How could a bank ever compete for my business when I have a rate of .9 over ECB etc.. ) .