In light of the recent stellar performance of our exports (see my note on the latest figures here), it's worth taking a look at the overall exports and trade balance composition by broadly-defined sectors. Here are some historical facts.

First for some interesting long-term trends: 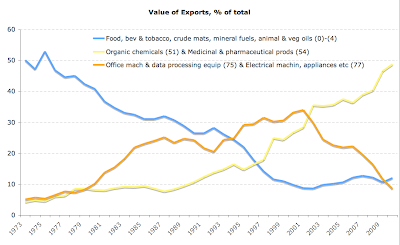 Other sectors evolution is plotted below: 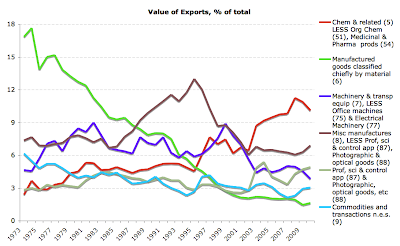 However, it is worth remembering that various exporting sectors are also importers - both of inputs into exports production and goods for consumption and capital investment. So consider the composition of our trade balance by each broad sector contribution: 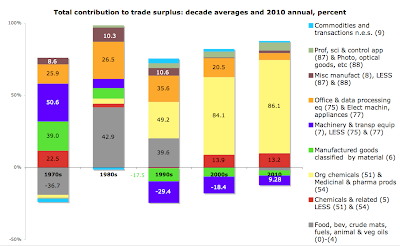 The chart above hardly needs much commenting. Ireland's trade balance is pretty much now made up of pharmaceuticals and medical products. back in the 1970s, on average, we were net importers of Organic chemicals (51) & Medicinal & pharma products (54) with the two sub-sectors contributing 3.74% deficit to our trade balance. By 2010, the two sub-sectors own trade surplus stood at 86.1% of Ireland's overall trade surplus and in the first 5 months of 2011 the same proportion stood at 97.3%. Let's, say, our potency is Viagra, folks.

Which, of course, brings us to the point of recalling that scary moment which awaits us in 2012, when Viagra starts going off patent... and the overall patent cliff that the industry is facing globally.

In the mean time, our flagship domestic exporting sectors: Total food and live animals (0), Beverages and tobacco (1), Crude materials, inedible, except fuels (2), Mineral fuels, lubricants and related materials (3) and Animal and vegetable oils, fats and waxes (4) continue to contribute negatively to our overall trade balance. These sectors yielded 2.62% negative contribution to trade surplus in 2010 and in the first 5 months of this year they own trade deficits are running at 4.85% of our total trade surplus. By the way, if you think this is a new development, the same was true in the 2000-2009 (-0.23%).

Some interesting stats to keep in mind when we talk about successes of our exporting sectors.

Posted by TrueEconomics at 3:48 PM

Fascinating but very worrying for irelands potential future growth.will this be a catalyst for a triple dip recession or signify a great depression post double dip recession