If you are wondering why Swiss Central Bankers are growing increasingly alarmed at the precipitous rise of the Swiss Franc, consider the following charts based on the real effective exchange rate (REER).

Take first a look at the historical relationship between the Swiss REER and the peer rates: 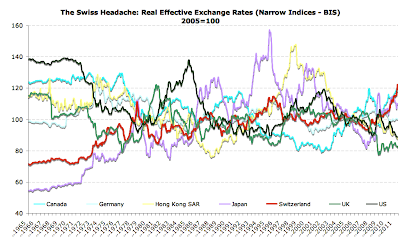 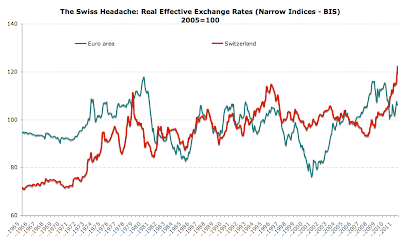 Taking a shorter horizon look: from 2000-present - Swiss REER should be currently around 104.12 - implying an overvaluation of 17.75%, while the Euro should be at 112.32, implying Euro undervaluation of 5.19%. Hence, Swiss problem is even greater over more recent period of time. In reality, trends since 2000 clearly show that Swiss franc should be competitive vis-a-vis the Euro. And of course, it's strength means it is not.

Next, consider the gap between the euro and the other REERs for the countries in direct competition with Switzerland for trade and investment. Charts below summarize historical trends: 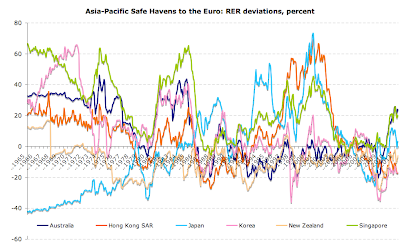 In some periods in the past, countries above acted as 'safe havens' for Euro area tribulations. Let's take a look at where these countries stand today compared to Euro REER:
Chart summarizing current safe havens vis-a-vis Euro REER index: 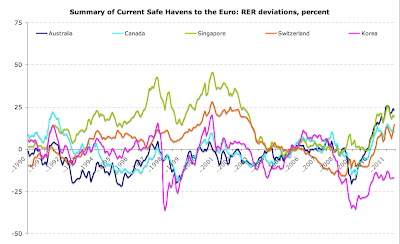 Lastly, equally important is the factor of risk / volatility. As the two charts below clearly show, Switzerland is not only one of the strongest 4 safe havens in the world when it comes to hedging REER risk on the Euro area, it is also one of the historically less volatile (since 1990s - second in quality only to Singapore and least volatile since 1965). In fact, since about 1982 on it is less volatile than Euro area as a whole. 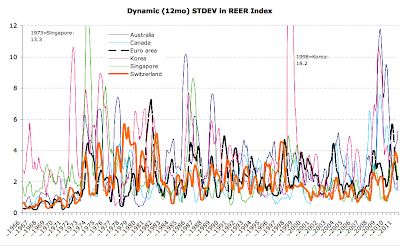 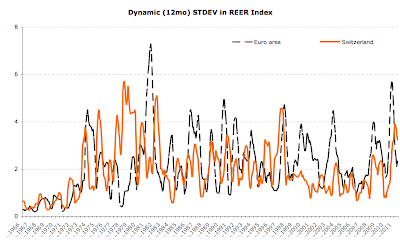 This, therefore, is the dilemma faced by the Swiss Central Bank today: debase the currency in terms of its value (less controversial, though still hard to attain for a small open economy - see a post on this here), plus debase the stability of the CHF (an even harder and more painful thing to achieve), or continue experiencing deteriorating competitiveness on exports side.

There seems to me to be at least a superficial similarity between the way in which large capital flows are driving up the value of the Swiss franc, thus damaging Swiss competitiveness, and the way in which an unchecked flow of externally-sourced capital helped to fund our property bubble, thus degrading our own competitiveness.

If this analysis holds, it might be interesting to compare and contrast the effectiveness of Swiss measures to protect the stability of their economy with the recklessly pro-cyclical government policies pursued here during our property binge.
Let me know if I'm talking nonsense though.