Working with the industrial production indices today, I found it interesting to compare the PIIGS in terms of their respective industrial performance over the years. The chart below does exactly that, but first few numbers, using annual averages of monthly data for 1990-present 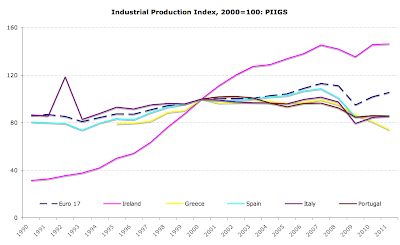 Ireland stands alone as the economy where the much hyped convergence thesis (one of justifications for the Euro area and indeed the EU overall existence) holds. Irony has it, in Ireland this convergence was achieved, of course, almost exclusively due to MNCs. So the EU can say thank you to the US, UK, some EU and ROW investments for proving the convergence thesis in just one out of 5 examined economies.

Posted by TrueEconomics at 11:57 PM

Indeed, Ireland too seems to buck the convergence thesis as its trend seems to be acting independently of the Eurozone's.