Latest trade stats are out for June 2011 for Ireland and the results are, overall, excellent: 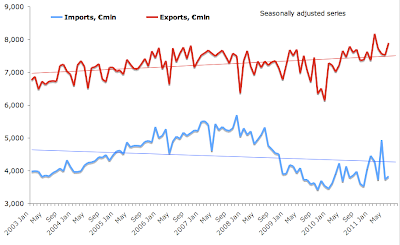 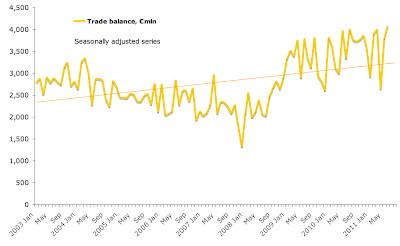 As chart above shows, trade surplus has broken through short-term flat trend that run from roughly speaking January 2009. Which, of course is the good news. Build-up of inputs imports in April 2011 is now exhausted, as indicated by the fact that we have moved to a much more intensive position in exports as determined by imports volumes (chart below). This suggests that trade surplus can shrink in months to come as rebuilding of inputs inventories set in. Regardless, however, June figures are truly spectacular. 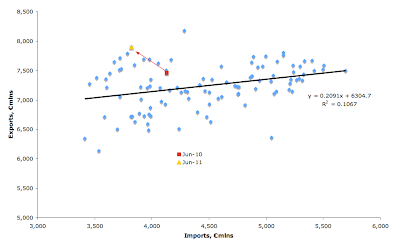 For H1 2011:
The above, of course, provides a backdrop for the claims that our exports-led recovery (which is roaring ahead) is going to underwrite overall economic recovery (which is not happening). Just think, the entire trade surplus increase for 6 months this year would be barely enough to cover 2.6% of our fiscal deficit through June 2011.

Per CSO (using final figures through May) for the first five months of 2011 compared with those for 2010:
These figures were achieved against improving terms of trade (lower TT readings) through May (the TT data is lagged 1 month behind the Trade data), as shown in the chart below: As the result of this, long-term relationship between terms of trade and exports implies that June performance was actually below exports levels consistent with current reading of terms of trade. This suggests that in July and August there is some room for exports increases despite the slight deterioration in the terms of trade month-on-month in June. 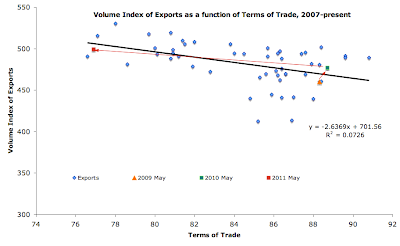 On the net, therefore, very positive set of figures on trade from Irish exporters! something truly worth cheering.

Posted by TrueEconomics at 6:48 PM