To remind you - VIX is in effect a market-based metric of risk in the US markets.

Given the nature of data, VIX data for intraday spreads is only available since September 2003.

Table below summarizes core stats on the data: 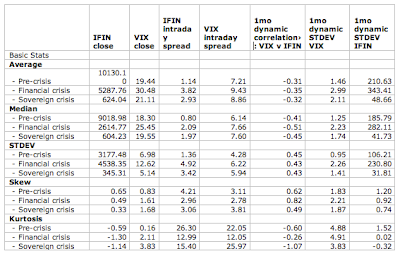 Several features worth highlighting in the above: 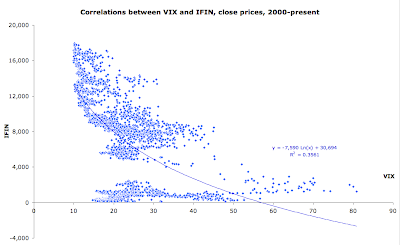 Chart above summarises the entire series of data, showing historically relatively weak, but negative (as expected) correlation between the values of Irish financial shares and the risk levels in the US markets.

Chart below breaks this down into three periods: 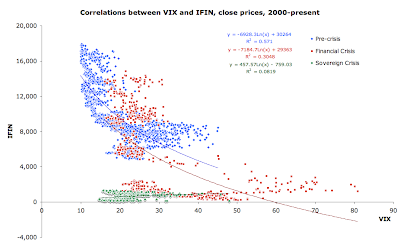 What's interesting in the above chart is that:
Chart below plots 1mo dynamic correlations between VIX and IFIN 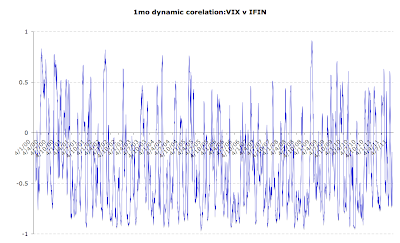 While correlations tend to stay, on average, in the negative territory, as the table above shows, they are not significantly large. In fact, overall during the Financial crisis period there were 318 instances of the correlation equal to or exceeding (in mode) 0.5 - or 51% of the time. In pre-crisis period this number was 42% and during the Sovereign crisis so far - 45%. But there is a slight problem in interpreting this 51% as the spillover effect from the US. During the Financial crisis period, pre-Lehman collapse, higher correlations took place 58% of the time, while post-Lehman collapse they took place 45% of the time. So overall, it appears that US risk attitudes (aka 'panics') were more related to adverse movements in IFIN before the Big Panic took place than during and after the Big Lehman's Panic set on.

Interestingly, there is also no evidence that changes/volatility in the US attitudes to risk had any significant serious impact (adverse or not) on volatlity Irish financial shares valuations, as shown in the chart below: 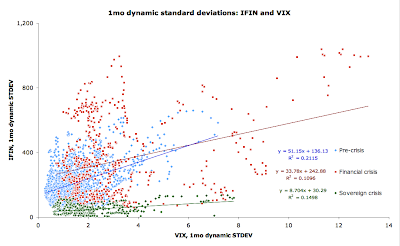 In no period in our data is there a strong relationship between changes (volatility) in US risk attitudes and the Irish financial shares valuations volatility.

A note of caution - these are simple tests. The data shows a number of problems that require serious econometric modeling, but overall, so far, there is no strong evidence to support the proposition that Irish banks shares or financial shares have been significantly and systematically adversely impacted by the US 'panic' or by 'Lehman collapse'. Our banks problems seem to be largely... our banks own problems...

Posted by TrueEconomics at 10:31 PM