So Mr Berlusconi's plan for Italy is now clearly outlined, but as usual with Italian government, it remains to be seen if:
Italy's new austerity budget is the country only political and macroeconomic response to the increase in bond spreads and its reliance on ECB purchases of the Government paper. In a clear concession to the emergency of the situation, the new budgetary measure were passed by decree, and are now subject to a 2 months-long debate and amendments by the Parliament. Which, of course, is risk number one – the Parliament amendments can significantly reduce the bill effectiveness.

Majority of the reductions will be driven by higher taxes, which means:
Given that the country already runs low rates of economic growth (with IMF latest projections for the average growth of under 1.3% per annum in 2011-2016), low personal income base (with GDP per capita adjusted for price differentials expected to return to pre-crisis levels some time in 2013 – the latest of all Big-4 Euro area economies), high unemployment (8.6% in 2011 against G7 average of 7.6%), the gross government debt of 119% this year, and the worst current account deficit of 3.4% this year amongst the Euro area Big-4 economies, it is hard to imagine that the country can actually master these tax increases.

Overall, based on IMF data, the estimated impact of the budgetary plan announced yesterday will take out roughly €1,980 per working person in new taxes and spending cuts, which amounts to 9.3% reduction in the per capita income, adjusted for price differentials. Accounting for this, IMF projections for Italy suggest that Italian real disposable incomes will not return to their pre-crisis peak anytime before 2016. And this is based on IMF's rather rosy assumptions for growth in 2011-2013, which were compiled prior to the onset of the recent economic slowdown.

The only structural reform promised by Berlusconi emergency measures is, as of yet completely unspecified liberalisation of national labour contracts.

Good luck to all who would go long Italy on the back of these 'measures'. In my opinion, there is about 25% chance of the Italian Government actually delivering on revenue raising targets from this package and about 10% chance we will see noticeable reductions in the costs of the state sector in Italy, with one slight exception – the local and regional reforms. However, there is a good 75-90% chance that Italy will slide into a recession in Q3-Q4 2011 and its 2011-2016 average growth rate will likely slide from 1.31% projected by the IMF back in April 2011, to ca 1.02%. Which, of course, will mean that its debt will top 120% of GDP mark in 2012 and is
unlikely to alter the path set out for it in the IMF projections. 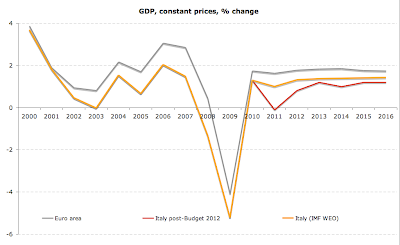 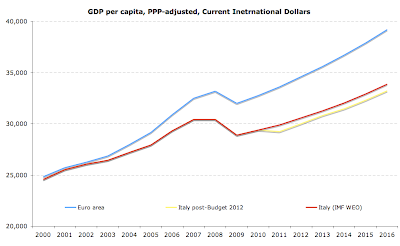 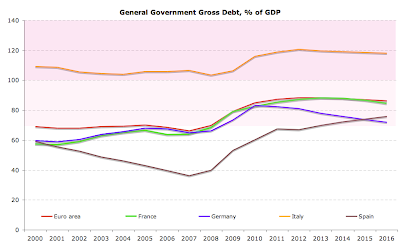 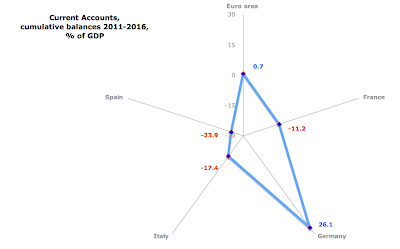 Posted by TrueEconomics at 9:09 PM

My favourite statistic on the behemoth that is the Italian public sector is the number of official state cars in use.
Britain and Germany boast fleets of around 50-60,000 state cars.
The figure for Italy is said to be no fewer than 629,000!

€45 billion of ADDITIONAL austerity/budget cuts, on top of all the other cuts announced is going to be a very hard political sell in Italy.