Some interesting news flow on the Swiss Franc side today with the Swiss National Bank announcing that it will intervene in the markets across not just one instrument, but three, simultaneously. CHF had seen dramatic appreciation against the Euro and the USD in recent months (see charts below), with current valuations of CHF, according to SNB: "threatening the development of the economy and increasing the downside risks to price stability in Switzerland."

In line with this, SNB announced that it will (1) move target 3-mo Libor rates closer to the range of between 0% and 0.25%, down from the current range of 0% to 0.75%, (2) will "very significantly increase" the supply of CHF, and (3) will hike required deposits for Swiss banks from CHF30 billion to CHF80 billion.

The problem, of course, is that for all the firepower deployed, SNB has little power to shift the prevalent investor sentiment that, at the time of expected QE3 and continued uncertainty about the Euro area sovereigns, CHF - alongside other small currencies - represents, in the minds of investors, a safe haven. This, of course, is the dilemma of the Swiss franc - a safe haven within an small and open economy: too well-run to join the basket cases across its borders, too small to defend... 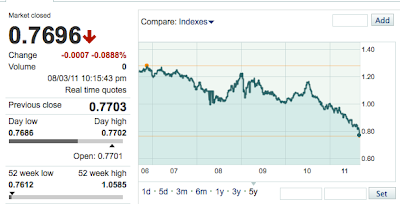 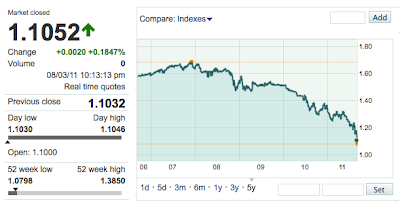 And so to end with some good background on what's going on with CHF recently - read this.
Posted by TrueEconomics at 11:17 PM