Following a dramatic rise over the recent weeks, gold registered a correction today. At this moment in time, gold for December 2011 delivery is down 5.76% on the day and is priced at USD 1,754.00 / oz. Here's a snapshot: 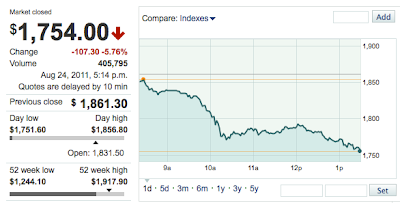 Of course, one day movement can be many things:
While it is extremely hazardous to profess any explanations for specific daily (and generally high frequency) changes, here are some of the reasons that are being advanced by various analysts as to the possible drivers of today's correction:
Incidentally, couple of days ago I commented on twitter that CME margins increases are long-term positive for gold, if they are successful in cooling off speculative leveraged investors.

My guess - and I stress that this is a guess - is that the current correction can turn out to be relatively deep, but it will not alter long term (9-12 months) upward trend for gold. The reason is simple: US, UK, Japan and Europe are poised to print money. In part, this is already factored into previous highs for gold. In part, the uncertainty about the quantities of QE to be deployed, are offering both the upside and the downside scenarios for the gold price relative to peak.

If, however, the global QE does not materialize, stock markets and corporate debt markets will likely to slip into serious bear sentiment. Which will push gold back onto near-parabolic trend up.

As far as today's short-term correction goes, my view is that it was 'helped' by the shifts of liquidity into equities with markets posting another day of strong upsides.

For a longer-term lesson to be learned: today's correction shows clearly the perils (for ordinary investors) of rushing into an asset with a single large-scale purchase. Instead, gold should be treated as a long-term allocation aimed at real wealth preservation and hedging. Such allocation should be built over time, with sustained - volatility-reducing - strategic long positions. Not with attempts to 'time' the market or based on impulsive buy-ins based on expected capital gains.

And, of course, the volatility shown by today's gold price movement, as well as an even more dramatic volatility in equities and fixed income shown over recent months, highlight the need for conservative, long-term investment strategy based on proper risk management and diversification.

Posted by TrueEconomics at 10:40 PM

really well said! thanks, and keep up the good work!!!! read jsmineset.com

Gold is for the long term. I like your views. Thank you!
Maurice Foster (Ireland)
mauricef2@eircom.net