The University of Michigan Consumer Confidence survey for August released to day pushed the index reading to the lowest level since May 1980 in a clear sing that despite all the "Yes we can" rhetoric from the US Administration, American consumers are simply not buying into the Obama-nomics. Or, perhaps, it's the Obama-nomics that is not trickling down to the US households still overloaded with debt and expecting massive future tax increases courtesy of the US Governments' handling of the fiscal spending side.

Here's the chart mapping the course of Consumer Confidence from November 2008 cyclical low of 55.3 to today's abysmal reading of 54.9. Short of the Irish banks shares, I have not seen anything that scary, folks. 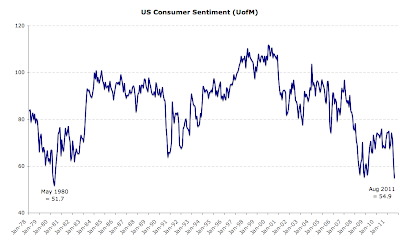 To me, the above picture reinforces my view that the US economy is now on a firm track to hit recession in Q3-Q4 2011. Unless, of course, the Fed steps in with US$1.5-2 trillion of fresh cash to, this time around, bailout actual American households.

Email ThisBlogThis!Share to TwitterShare to FacebookShare to Pinterest
Labels: US Consumer Confidence, US consumption, US cycle, US economic policy, US economy, US recession