Staying on the topic of Exchequer performance - the theme is (see earlier post here) "The dead can't dance". This, of course, refers to our flat-lined economy and the ability of the Government to extract revenue out of collapsing household incomes, wealth and dwindling number of solvent domestic companies.

The Government has issued back in March this year some €3.085bn worth of bank promisory notes to the larks of Irish banking: Anglo, INBS and EBS, all of which have since ceased to exist. On top of that the Government showered some €5.241bn of taxpaers cash onto the elephants of the Irish banking system: AIB (the Grandpa Zombie) and BofI (the Zombie-Light). To top things up, the Exchequer pushed some €2.3 billion of taxpayers funds into IL&P (the msot recent addition to the Zombies Club).

Controlling for banks measures, 2011 deficit through July stands at €8.241bn which represents savings of €1.449bn on same period of 2010. So, now recall - tax receipts went up by €1.48bn in total. Ex-banks deficit shrunk by €1.45bn in total... which, of course, strongly suggests that the "Exchequer stabilisation" so much lauded by our Government was achieved largely not due to some dramatic reforms or austerity, but due to old-fashioned raid on taxpayers' pockets. 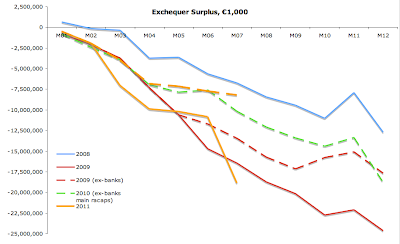 It is worth noting that lagging in cuts departments account for ca 49.12% of the total spending by the Government, while Social Protection accounts for 30.07%.

We might not want to see the above areas cut severely back, but if we are to tackle the deficit, folks, we simply have to. Why? Because our debt is rising and this debt is fueled largely by the deficit.

And this means that our debt servicing costs are also rising. Total debt servicing expenditure at end-July, including funds used from the Capital Services Redemption Account was just over €3 billion. Per DofF statement, "Excluding the sinking fund payment which had been made by end-July in 2010 but which has not yet been made in 2011, debt servicing costs to end-July 2010 were some €21⁄4 billion. The year-on-year increase in comparative total debt servicing expenditure therefore was €3⁄4 billion." One way or the other, we are paying out some 12% of our total tax receipts in debt interest finance. That is almost double the share of the average household budget that was spent on mortgages interest financing back at the peak of the housing markets craze in December 2006 - (6.667%).

Posted by TrueEconomics at 4:37 PM