August is a silly season, so forgive me for avoiding digging too deep into silly data. This includes the data on Exchequer spending and tax receipts. They are silly. Why? Because the shambolic rearranging of chairs on the deck of the proverbial Titanic - the so-called reforms of the Departments - has made historical references invalid. We no longer are able to check what the Government is really doing and instead are forced to rely on what the DofF is telling us that the Government is doing.

Here are the latest figures for August.

Total tax revenues for January-July 2011 was €18.633 billion which is €1.48 billion or 8.63% higher than in the same period last year. According to the DofF note, "This year-on-year increase was due primarily to higher income tax receipts, arising from the Budget 2011 measures, including the introduction of the USC. Excise duties, corporation tax, customs duties and stamp duties all recorded year-on-year increases also." 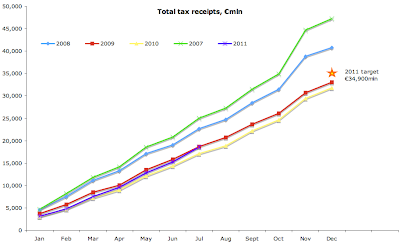 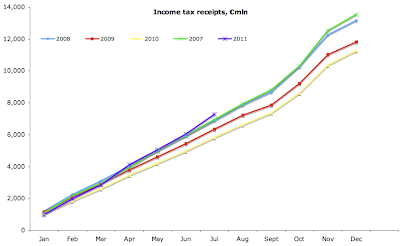 Sadly, enough, they wouldn't tell us just how much of this increase was organic (out of old tax revenues) and how much due to USC. The note on spending attributes €604mln to USC on the side of the expenditure adjustments. So carrying the same over to tax receipts side implies that non-USC related tax measures in Budget 2011 have lifted tax revenue by €876mln so far in the year or annualized rate of tax increases of ca €1.5 billion. This arithmetic suggests that income tax receipts in Jan-Jul 2011 were around €6,673mln or still below 2008 and 2007 levels.

Adjusting total tax receipts for the above estimate of USC puts total receipts at €18,029 - a level 5.1% ahead of 2010 and 3.53% below 2009 figures. Not exactly a spectacular improvement in the 4th year of the crisis and after 3 years of austerity budgets. And not exactly spectacular improvement given that officially, per our Government claims, we are out of the recession now since Q4 2010.

The Government loves targets, even if the objectives they set are unambitious enough to be able to deliver on them. In this department, we are doing ok. Tax revenues were €263 mln (1.4%) above target. Income tax was €160 mln or 2.2% above target at end-July, but, per DofF own admission, "excluding the beneficial impact of earlier than expected DIRT payments, both in April and July, income tax was a little below target in the first seven months. That said, the underlying performance of income tax in recent months has been encouraging, with the targets for both June and July marginally bettered."

Enough said about targets. Back to data. 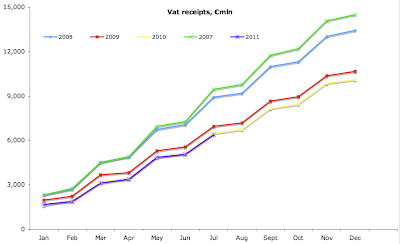 Corporate tax revenues were €1,648mln which is a vast improvement of a whooping €23mln (what the Dail spends on expenses, roughly) yoy (+1.42%). Corporation tax is now down 12.57% on same period 2009 which was the best year for this line of tax receipts in 2007-present period. 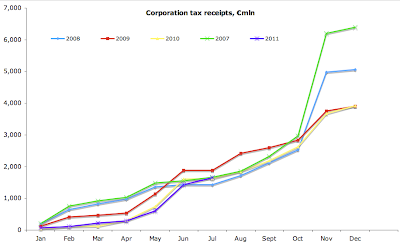 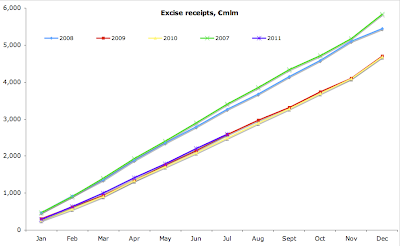 The rest of the tax heads were all over the shop. Stamps improved by 23.9% yoy, but remain marginal and the improvement was due to timing factors. CGT and CAT are both down (and both are extremely marginal in size), suggesting that capital investment in the economy remains on downward trajectory. Customs were up 9.9% yoy - potentially due to increased improting activity in May-June 2011 as MNCs beefed up their stocks of inputs.

So overall picture on tax receipts side suggests:
Things are, therefore, stable - in a 'the dead can't dance' way.

Posted by TrueEconomics at 3:45 PM