01/08/2011: Should President Obama play a harder ball with the Republicans?

In the wake of the US debt 'deal' pre-announcement, I have been seeing comments, including that from Paul Krugman in the NYT today (here) which appear to suggest that President Obama's agreement to accept parts of the Republican's proposals represents a surrender of the presidential authority and, more improtantly, such a limit on presidential authority is somehow a bad signla concerning consistency of macroeconomic policy in the US.

In particula, Prof Krugman states: "In fact, if I were an investor I would be reassured, not dismayed, by a demonstration that the president is willing and able to stand up to blackmail on the part of right-wing extremists. Instead, he has chosen to demonstrate the opposite."

Now, this argument would be fine, if Mr Obama had a record worth taking a stand on. He does not. Here are two charts on US debt based on IMF WEO database. 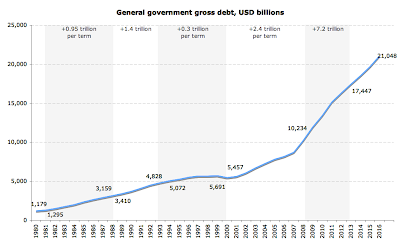 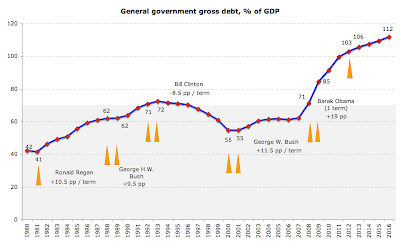 So both in terms of debt to GDP ratio and absolute current dollar denominated debt levels, Mr Obama might do well running away from his previously established record. Whether he did this via the latest debt deal or not is a separate issue altogether, but Mr Krugman's statement that President Obama should have exhibited more intransigence as the means for encouraging investors confidence in his administrative abilities is bizarre, to put it mildly. Mr Obama has no record worth defending. He has a record worth abandoning.
Posted by TrueEconomics at 8:47 AM

Email ThisBlogThis!Share to TwitterShare to FacebookShare to Pinterest
Labels: US debt, US debt ceiling, US debt crisis, US debt cuts

Krugman seems to be suggesting that investors in US debt would somehow be reassured by the President further increasing the supply of that debt, even though this would reduce its value as a safe-haven asset.
Also, as I understand it, the current deal will see immediate spending cuts of about $100 billion per year, perhaps rising to $250 billion per year later on. That hardly counts as 'slashing spending', as Krugman describes it.

If he had any sense, that quote from him should read 'if I were an investor, I would be reassured, not dismayed, by a demonstration that Republicans are willing to stand up to blackmail on the part of a fiscally incontinent president.'

With regard to his record, surely the fact that Obama took over during a time of extraordinary financial stress and managed to avoid a deep depression by embarking on a huge stimulus package should be factored in here.

He also inherited the "Bush Tax Cuts" which he mistakenly renewed in December to stop the American economy suffering another shock.

I think the Tea Party are economic terrorists who would bring their country to it's knees in the name of ideology.

Krugman is deliberately trying to shift the mind of democratic negoitiaters to a stronger opening bargaining position.

Moderate liberal people always lose out to extremists in these sort of negoitiations.

Bingo, Jack. You got it.

@Davym - thanks for the comment. Yes and no. He did inherit economy in distress, but what Bush Admin passed as deficits (substantial) is factored in Bush's administration term data in the charts. Obama inheritance from Bush is a set of policies that Obama promptly continued or enlarged. This is his own failure, not that of Bush Jr (again, I am not defending Bush's record, which, IMO, was pretty abysmal).

Where I would siagree strongly with your assessment is in the alst section.

A) I do not think there is anything seriously 'extreme' in the SU Republicans' current position on debt. US is amidst a debt crisis. Debt crises can be resolved only by reducing debt levels. This means (1) reversing deficits into surpluses, (2) cutting future debt. There is no better time to start on both than now. Delaying this process only exacerbates the crisis.

B) Krugman's position is by far not the 'moderate' one. He is even more belligerently partisan than the Republicans. In fact, Krugman own argument shows that he would prefer increasing debt burden in the US in a hope (and there is no scientific reason as to why this hope is justified) that more deficit financing will lead to greater economic growth.

I doubt that the problem of debt overhang was caused by Bush tax cuts. Nor can the problem be resolved by higher taxes. What's the upper margin tax rate on income in California? Once federal and state taxes are factored in? Over 44%? That makes California one of the highest taxed states in the Union, yet it this did not help the state solvency. The reason is simple - waste abounds when taxes are raised and deficit financing is checked.

I find it interesting that you contrast 'moderate liberal people' against extremists. I wonder where fiscally conservative and even plain rationally thinking people (concerned with debt overhang and deficit financing run out of control by both past Republican and Democrat administrations) falls in this taxonomy.

Thanks for your reply ..

I think that most fair minded rational people would agree that the USA has to address their debt problem. In my mind this consists of revenue raising measures and spending cuts.

Would the fiscally conservative and rationally thinking people allow the possibility of revenue raising measures? There must be some low lying fruit here.

The Tea Party's opening bargaining position is this must be all achieved through cuts to services like medicare. No closing of tax loopholes for billionaires and millionaires on luxuries such as private jets.

And that's it .No budge . "Don't mess with our taxes or we will bring the whole house of cards down in the name of fiscal conservatism" To me this is an outrageously extreme position which is ideological and irrational.

Surely a rational person ( or fiscally conservative person) would say we could at least discuss these revenue raising measures.

To stick to this dogma even after the "Great Recession" in my mind is extreme.

After all is politics no the art of compromise?

I wouldn't argue with you on the stats and facts but surely there must have been one revenue raising measure that could have been implemented?

The last time The US had a balanced budget was when taxes were 20% of GDP, they are now 14% of GDP. You cannot argue that the 20% taxed economy, I.e. under Clinton, was much stronger than the one now. Revenue matters, it can't work with only cuts.

I have to agree with Daveym, Obama inherited a complete mess from Bush including spiralling unemployment, a financial meltdown affecting both manufacturers and banks and a bunch of wars.

Possibility Obama's greatest weakness is his decency and this is being exploited, it would be great if he came out and said,

"Republican's, you haven't compromised. Raise the tax level on guys earning +$100k or I won't pass the bill, end of story!"

"In 3 months all troops will return from Afghan and Iraq. The war is a disgrace, the transitional governments must deal with their own people."

Obama is probably too much of an intellectual and willing to listen to both sides of the story. Which is a good trait but sometimes I imagine it would be better to decide and stick to the decision, especially when dealing with bullies.

In any case, thank goodness Bush is gone.

Just to respond to EminentGent and Sean..

Enimem Gent : The economy under the Clinton regime was robust.As for the taxation\GDP stats I read some similar research recently. Also was taxation\GDP stat not higher under the "Small Government God" Reagan. Something closer to the Clintom Era.I'm sure Constantin has more precise info here. I will dig if necessary but I think this is an easy confirmation.

Sean : This is my point exactly moderate people ( fiscal conservatives included ) have their intelligence and common decency abused by ignorance and intransigence.Rational reasonable people have too often allowed common sense prevail whereas right wing zealots leave the table with a lot more than they deserve.

Personally I don't like whinging or cribbing I prefer action, Obama and co. know that this is how the Tea Party play the game so adapt and take appropriate action.

Will dig out comparative stats and post on these around Thursday - once back from the overnight to Trieste...