In the previous post I highlighted some new developments in Euro area banks lending to the SMEs and larger enterprises (post link here). In this post, let us consider the data (through July) from the ECB's Banks Lending Survey for the core drivers of the structural stagnation and renewed weaknesses that have emerged in the Euro area credit supply.

The survey question we are considering here is: "Over the past 3 months, how have the following factors affected your bank's credit standards as applied to the approval of loans on credit lines to enterprises?" 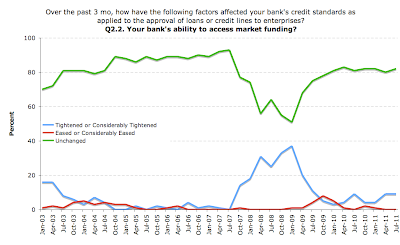 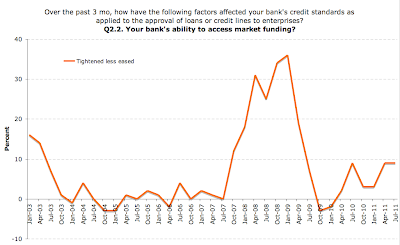 When it comes to the banks' liquidity positions, the story is also that of continued and deepening deterioration: 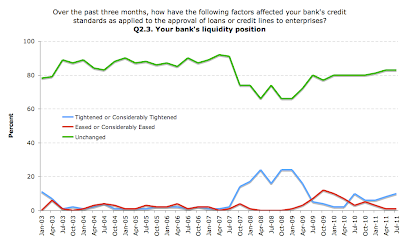 Meanwhile, banks competition is now running along a flat trend: 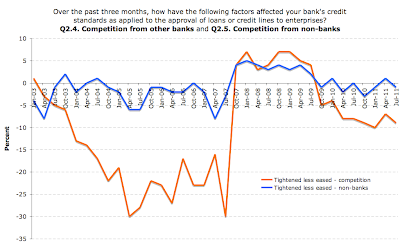 So in summary, despite (or perhaps because of) the regulatory and recapitalization measures deployed, in 3 months to July 2011, Euro area banks continued to shrink supply of credit to Euro area enterprises because their funding conditions, liquidity positions, capital costs and expectations for economic activity were getting tighter. In the meantime, competition in European banking sector, having eased significantly from the peak crisis period, is running at generally depressed levels and along relatively flat trend.

Surely these are not the signs consistent with stable improvement or the end of the crisis?

Posted by TrueEconomics at 12:29 AM