Industrial production for June confirms the trend spotted here few months ago: Irish economic recovery (or rather the nascent signs of it) is now running out of fuel.

Industrial production has been a bright spot on our economy's horizon, primarily thanks to the MNCs. In annual terms:
All of these positive dynamics are now changing and not on a monthly volatility - along a new trend.

First the latest data on Production indices:
Chart below illustrates: 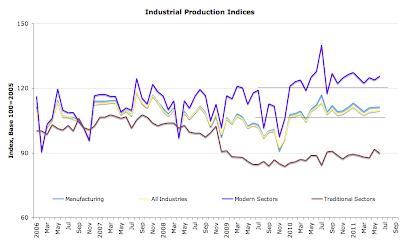 One continued trend has the widening gap between the Modern sectors and Traditional sectors. The gap between two series increased from 32 points to 35.8 points in May to June 2011. However, as the chart below illustrates, this gap is now trending along the flat since September 2010. 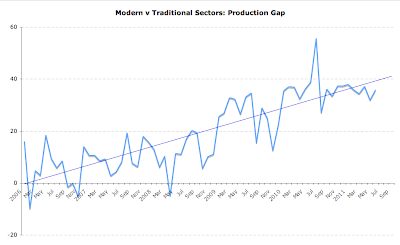 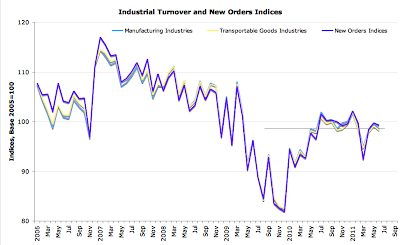 Overall, while monthly changes on volumes were somewhat in-line with previous growth trends (except for Traditional sectors), the volumes growth is now appearing to have established a flat trend since mid 2010. Exactly the same applies to Turnover indices (which are also showing monthly deterioration) and to the New Orders index.

Posted by TrueEconomics at 9:07 PM