Summary table courtesy of the eurostat: 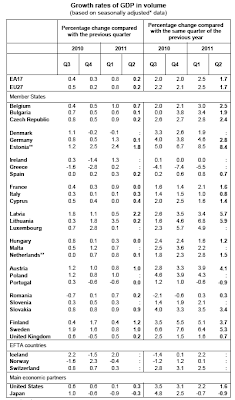 The overall disappointing growth in the euro area was entirely predictable, given that the leading indicators were pointing to it for some time now (see here), the industrial output data (here), etc.

However, here's an interesting chart suggesting that months ahead are not going to be easy for German economy: 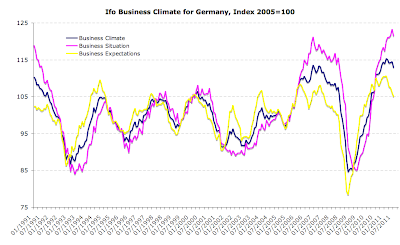 Pay especially close attention to the yellow line showing business expectations for economic activity in months ahead. The data above is through July 2011, the latest we have and it firmly shows that business expectations have now dropped to the lowest level since January 2010, marking as fifth month of consecutive declines. The index stood at 105.0 in July 2011, down from the Q1 2011 average of 110.1 and Q2 2011 average of 107.1.

Euroarea leading economic indicator is now slipping since the beginning of July and this confirms continued weakness in the growth series. 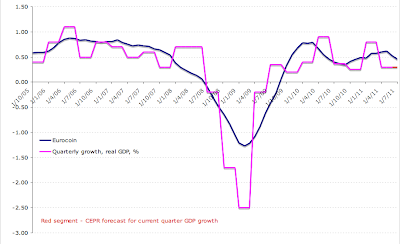 Thanks for this analysis, Constantine.

I wonder will this data influence ECB interest policy?
Given that growth is minimal to anaemic the prospects for inflation in the Eurozone based on growth must be in question?