First, consider the issues of employment and core PMIs: 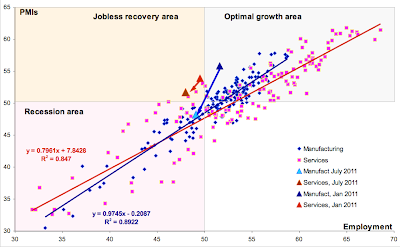 So in terms of economic activity, we have moved:
Summary of employment indices is extremely worrying at this stage: 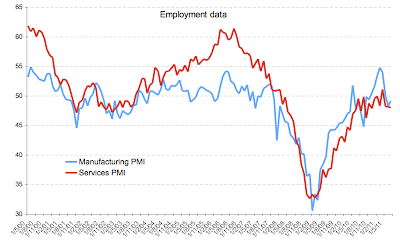 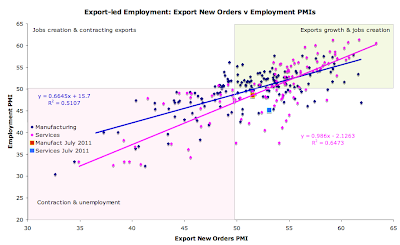 So far, since January 2008, there were:
Good luck to ya all who hope for an exports-led recovery to yield significant reductions in unemployment any time soon.
Posted by TrueEconomics at 10:28 AM

Dr. Constantin, do you feel that if this export growth continues that unemployment will also continue to rise or can you see a point that export growth might hit where it will have a positive effect on employment as I can only see the export market growing for the near to medium future?

Of course exports activity contributes to employment. I don;t doubt that. And as exports expand, so will, eventually, employment in the sectors and associated firms grow.

My point is that it is too naive to rely on exports-led recovery while destroying consumer demand and household investment through tax and other policies we are adopting.

Thanks. I look forward to your next post and view on the turmoil that has hit this morning and with the overnight decline in Asia. Keep up the great work!