In the previous two posts I looked at the supply of credit to enterprises and the core drivers for changes in banks lending within the Euro area over the 3 months through July 2011. Here is a quick snapshot of what these changes mean on the ground.

The survey question this relates to is: Over the past three months, how have your bank's conditions and terms for approving loans or credit lines to enterprises changed? 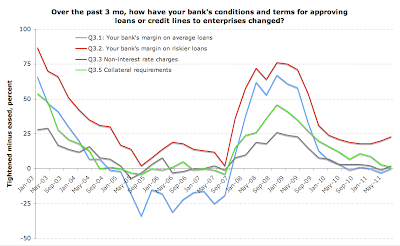 While margins and non-interest rate charges are running at virtually no change since early 2010, there is a slight uptick in pressures in these credit costs. Collateral requirements remain on moderating tighter path, while riskier loans are posting second consecutive quarter of tightening of the margins.

Overall, these responses paint a mixed picture of costs of the bank lending to enterprises and suggests that market funding and capital and liquidity concerns drive banks lending dynamics in the Euro area, rather than costs and conditions structures.