Let's chart what I called the Roy Lichtenstein-styled "KABOOM" moment for the markets today. Recall that by definition the CBOE Volatility Index (VIX) is "a key measure of market expectations of near-term volatility conveyed by S&P 500 stock index option prices. Since its introduction in 1993, VIX has been considered by many to be the world's premier barometer of investor sentiment and market volatility."

Now, basically, VIX is as close to a pure price risk bet as we have. Again per CBOE: reported VIX index values represent "market estimate of expected volatility that is calculated by using real-time S&P 500 Index (SPX) option bid/ask quotes. VIX uses near-term and next-term out-of-the money SPX options with at least 8 days left to expiration, and then weights them to yield a constant, 30-day measure of the expected volatility of the S&P 500 Index."

Now to the charts.

Starting from the top, we have actual VIX itself - today's close at 48.00 which was: 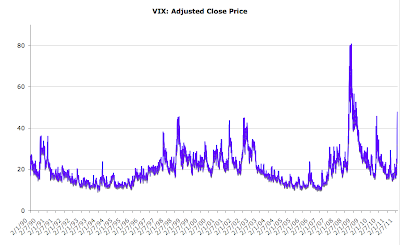 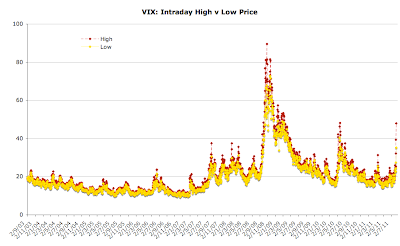 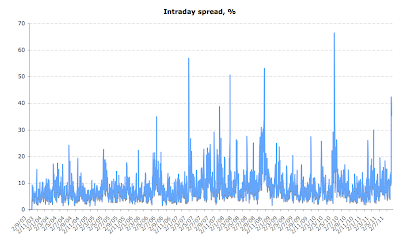 To see just how extraordinary last couple of days are, consider two time horizons for volatility in VIX itself: 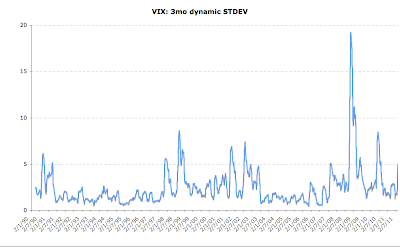 and a shorter horizon: 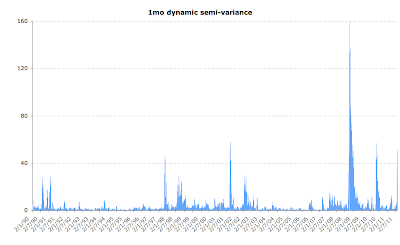 However, in terms of daily percentage changes, today's rise of 50% is the fourth highest daily increase since the beginning of the VIX history and the highest since January 2008.

In terms of 1mo dynamic semi-variance (measuring only variance for the days of increasing VIX index, in other words - only for those days when risk rises), the last chart above clearly shows that we are in for a treat in these markets.

Posted by TrueEconomics at 10:10 PM